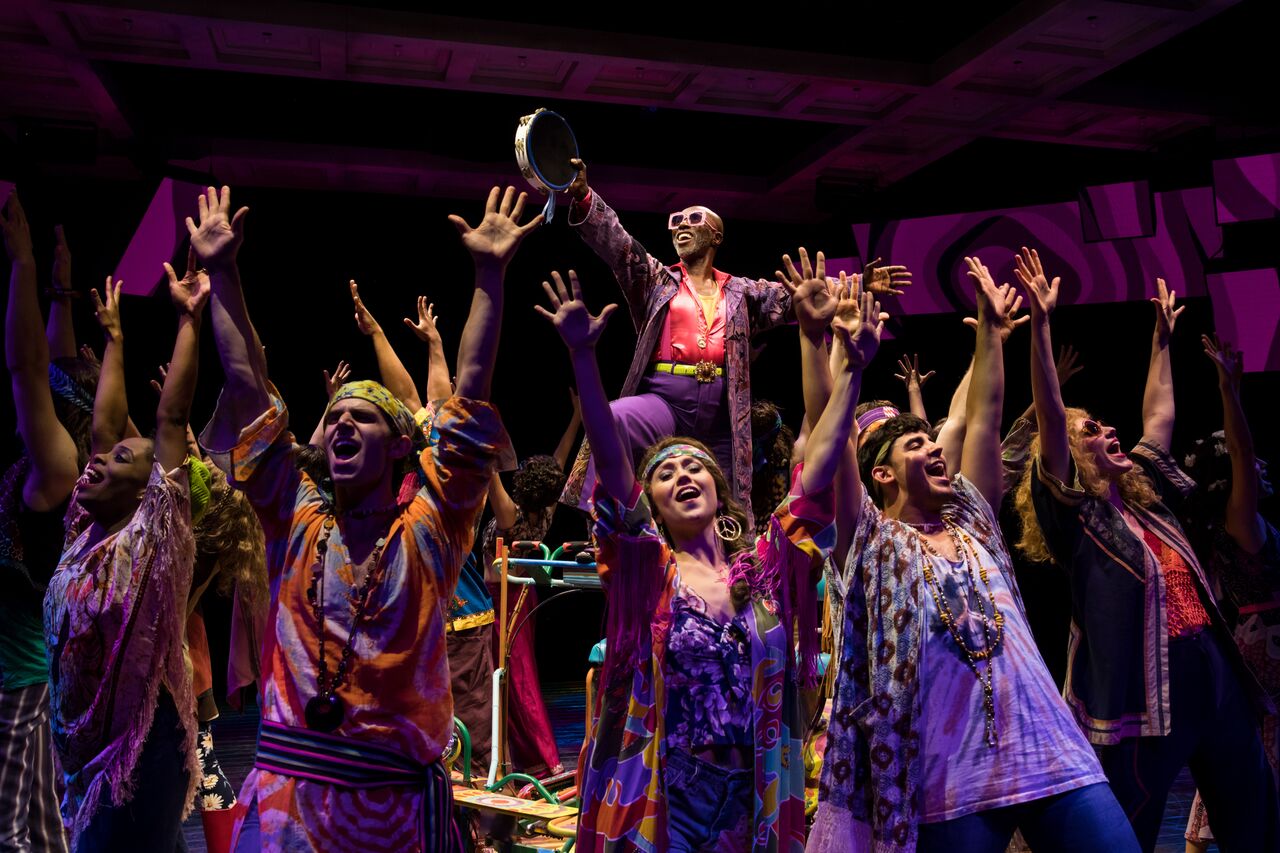 Kenny Ingram with the cast of “Sweet Charity”/Photo: Justin Barbin

Playing now at Marriott Theatre is “Sweet Charity,” a musical comedy that earned nine Tony awards when it debuted on Broadway over fifty years ago. Featuring a book by the now-late great Neil Simon (as well as lyrics and music by Dorothy Fields and Cy Coleman), it was originally directed and choreographed by Bob Fosse. The trials and tribulations of Charity Hope Valentine, a dance-hall hostess stuck in the seedy bowels of sixties New York City, form the plot.

The principal job description of a dance hostess is to slow-dance, make small talk, and smile, all the while suffering the grabbing hands of strange men. These men make up the “big spenders” wearily alluded to in the show’s most iconic dance number. Charity and the rest of the girls dream of escaping the place but dismal job prospects and perhaps their own sense of self-worth hold them firmly in place. Despite this hard life, Charity (Anne Horak) remains remarkably naïve about the men she involves herself with.

While maybe slow to warm, Horak more than holds her own against a seemingly neverending parade of veteran talents. This is especially true within the big dance number “Rhythm of Life,” where Kenny Ingram’s performance as Daddy Brubeck transforms the Marriott stage into a groovy psychedelic experience. Horak and the rest of the cast are wise to let Big Daddy lead.

The production comes to life though when Alex Goodrich (Oscar Lindquist) enters the stage toward the end of the first act. A classic Neil Simon neurotic, Oscar adores his sweet Charity but maybe not unconditionally. The production also dazzles in its choreography with director-choreographer Alex Sanchez nailing the big Fosse dance numbers, which are perfectly complemented by musical supervisor’s Patti Garwood’s full-throttle orchestra.

Contained within the press materials is the stated desire that this production reflect upon the #MeToo movement. The source material, however, almost guarantees this effort falling short of expectations as Charity’s fortunes rise and fall only in tandem with the affection visited to her by various suitors. It is not until the very end that she demonstrates any insight into her own feelings or takes steps on her own toward living her best life. What does resonate are the dance-hall girls’ limited life options, modest aspirations (like being a hat girl or dental hygienist assistant) that appear tragically out of reach. Sanchez does not gloss over their struggles and in the end Charity appears more of a fighter than a victim. (Noel Schecter)