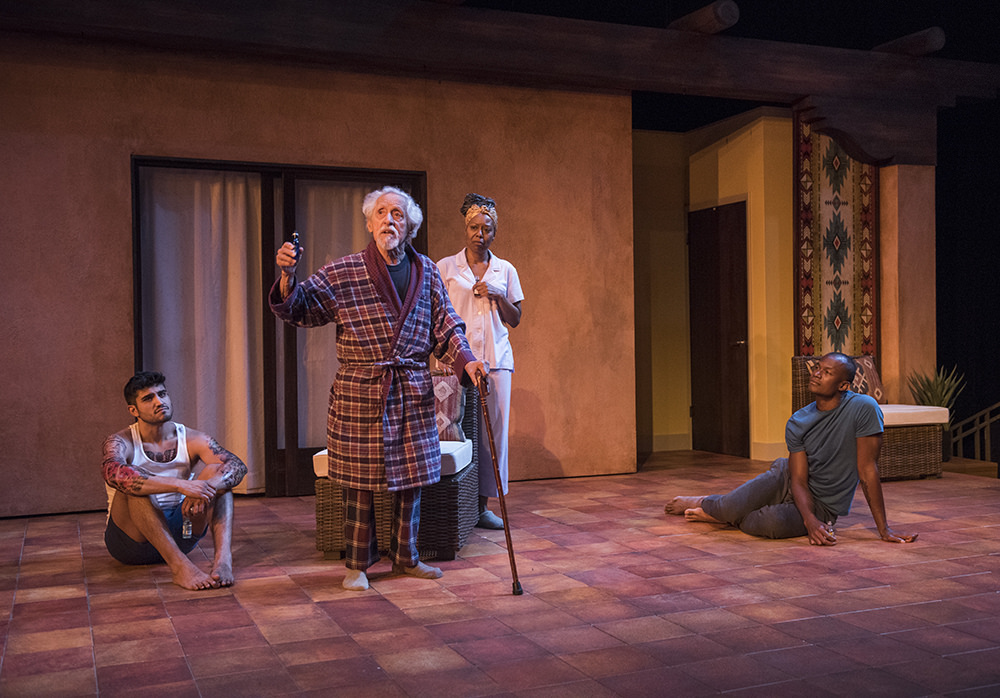 The play presents two distinct stories, which never coalesce. The first concerns aging family patriarch Rudy (played by the ageless Mike Nussbaum) as he confronts his slide into senescence. The second involves Rudy’s grandson Felix (Sean Parris), a young gay man who must decide whether to proceed with the adoption of the troubled and needy young niece of his partner, Jackson (Danny Martinez). Linking these dramatic questions, supposedly, is the character of Linda (Penelope Walker), Felix’s mother and Rudy’s one-time daughter-in-law and current caregiver. The foursome has assembled in New Mexico for the funeral of Cyrus, Rudy’s wayward son, who abandoned Linda and Felix many years ago. It’s an uncomfortable gathering for this wounded family, whose feelings of grief are mixed with smoldering anger and resentment.

Over the course of an hour and a quarter—which seems longer—unlikely decisions are made but nothing really happens, and the larger world is never glimpsed. We learn little about these characters, who seem to have no backstory. It would be nice to know why Linda is considering sacrificing her schoolteacher career and pension and devoting her life to tend to her crotchety and increasingly dotty ex-father-in-law, who raised the man who ditched her. We also wonder about Rudy’s wife or wives and why this old Jew who grew up in a New York tenement with myriad siblings seems so isolated apart from Linda.

Director B.J. Jones keeps the pot at rolling boil throughout, mostly ignoring the boredom, awkwardness and indifference that inevitably accompany real family reunions. At one point, Linda goes after her adult son’s lover, whom she hardly knows, like Lieutenant Columbo trying to poke holes in a suspect’s alibi. It is an ostensibly serious moment that, like many others here, would have been better played for laughs. But irony is foreign to the earnest pseudorealism of this production. It’s as though the play takes place on Planet Hallmark, where no one has a shadow side, everyone ultimately does the right thing, and conflicts are swiftly and tidily resolved by a moralistic talking-to.

Beneath the gluey sentimentality are some disturbing ideas. The play suggests that no sacrifice is too great to make on behalf of a child, but the same is not true for the elderly. Rudy may be the sage, poet, wit and soul of his family, but his decision to end his life soon rather than impose on his kin is resignedly agreed to. Rudy is depressed by his slipping memory and especially the indignity of his incontinence, an all-too-common condition which millions respond to not with suicide threats but with proper nursing care and Depends.

Lauren Nigri’s generic Southwestern motel set is well-nigh perfect, and Heather Gilbert’s desert-tinted lighting and André J. Pluess’ sound design have a subtly shifting emotive quality. The same cannot be said of the acting, which, aside from Nussbaum’s relaxed and playful professionalism, is too often uptight and monotonous. And while color-blind casting is a laudable goal, here it raises unanswerable questions about Rudy’s history and whether the play has a racial angle—or whether, again as on Planet Hallmark and nowhere else, racial difference no longer exists. In any event, the casting strengthens the creeping feeling that what Rudy calls the “ragtag little group of humans” in this contrived play are more thinly embodied issues and psychodramas than actual relatives. (Hugh Iglarsh)