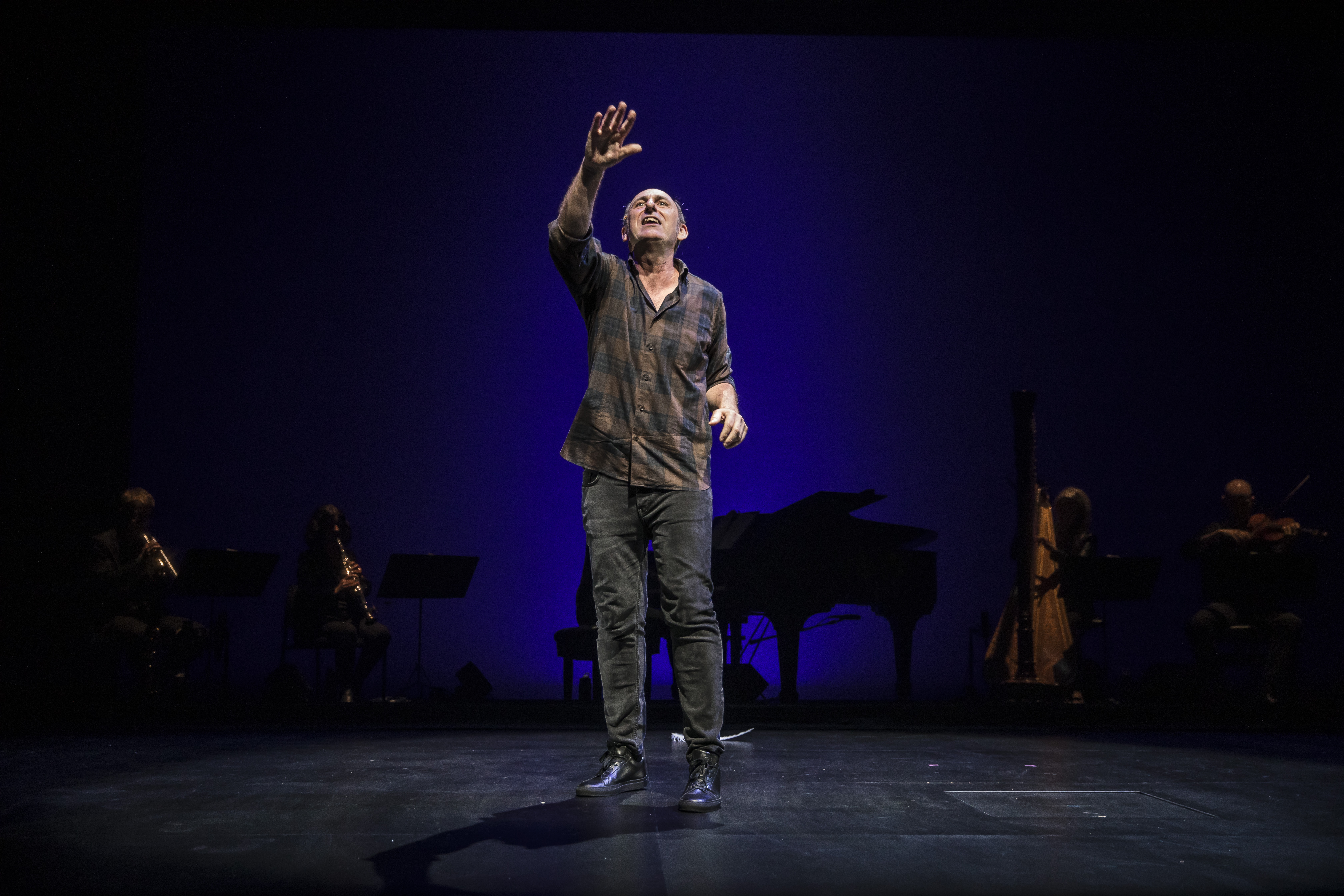 Returning to the Goodman after debuting in a workshop production at last year’s New Stages Festival, David Cale’s autobiographical one-man show migrates from the Owen to the Albert. Those such as myself concerned that the production might lose a layer of its intimacy in the move should rest assured: David Cale could make an airplane hangar feel like a warmly lit living room.

Cale is an enchanting, disarmingly earnest storyteller. Hung between or sometimes in the midst of his anecdotes and vignettes are a dozen songs, their lyrical simplicity, coupled with Cale’s unadorned singing, suggesting an understated psychological depth, a nuanced understanding of the self that requires rigorous exploration. Throughout his show, which hinges on an unexpected (although foreshadowed) act of violence, Cale is both within and without his own child—and young adulthood. “We are both the show and the people watching the show,” as he says in his own words.

Cale cheerfully describes his own youthful obsession with life, especially at its edges. It stands to reason. “We’re Only Alive” is a document of harsh realities and grief at perceived missed opportunities, strung all the way round by the animating tension between what is and what could have been, the melancholy specter of “if” haunting every scene. Life, as Cale tells it, is both precious and inexplicable, a not-so-endless garden of forking paths where some fruit withers on the vine while elsewhere it flourishes.

“We’re Only Alive” is also a play about trauma, its biological and social components. “I gave him his fear,” Cale says, not so much impersonating as embodying his mother, Barbara. And while Cale never goes full Norman Bates, there is something unnerving about the ease with which he slides into his characters, particularly his mother. Cale’s father, Ron, is pitifully shallow, a working-class drunk whose life is controlled by his own father, a hat-factory owner who sees no separation between family and business. Ron’s only apparent motivation is to be free, making the play’s turn of events all the more painfully ironic.

Barbara is a far more charismatic character and we spend a significant chunk of the play’s middle with her. It is through his mother that we better come to understand Cale himself, but Barbara is beguiling landscape in her own right, a woman nearly invisible in her day-to-day, but bursting at the seams with expression and insight. Blame the corked bottle of English manners or the imposing social expectations of the working class to rise above the inherently inequitable dictates of their station; there are innumerable external and internal factors that keep Barbara trapped. Cale captures her overwhelming sense of longing while demonstrating his own brand of straightforward lyricism in the melancholically titled “If I’d Gone Left.”

Accompanying Cale’s vocals are Matthew Dean Marsh (music director, piano), Dave Belden (viola), Michelle Campbell (harp), Desiree Miller (cello), Jered Montgomery (trumpet) and Anna Najoom (clarinet), providing music that is somehow both exotic and quintessentially English. The arrangements reminded me of what early demos of Joanna Newsom’s “Ys” might have sounded like or the more involved instrumental sections of Sufjan Stevens’ “Illinois.” Cale allows himself to be taken up by the music as if he is a winged bird and the chamber orchestra a strong gust. He is never out of control but he is also no longer with us, arcing above our human conundrums. Music releases Cale back to the wild of his childhood and it is here that he finds both peace and joy.

We inherit the desires of our family, even if we don’t always recognize them. Whether it is the need to become someone unrecognizable to ourself or, in contrast, to recognize ourselves in the admiration of others. Casual cruelty and innocuous offhandedness in childhood can incubate into the spiky traumas of adulthood. Much like family, we have little say in the matter. As Cale painfully reminds us, not all of us survive the families we join. But many of us do. And those who did will recognize the language of the survivor, the blinking Morse code and the elaborate SOS.

“We’re Only Alive” is a poignant mix of comedy and tragedy, a piece of pure performance that ought to be seen by as many people as possible. Perhaps, after the almost-assured success of this run, it will get its remount in an airplane hangar after all. Like Cale to his dreams, this show is worth following wherever it takes you. (Kevin Greene)