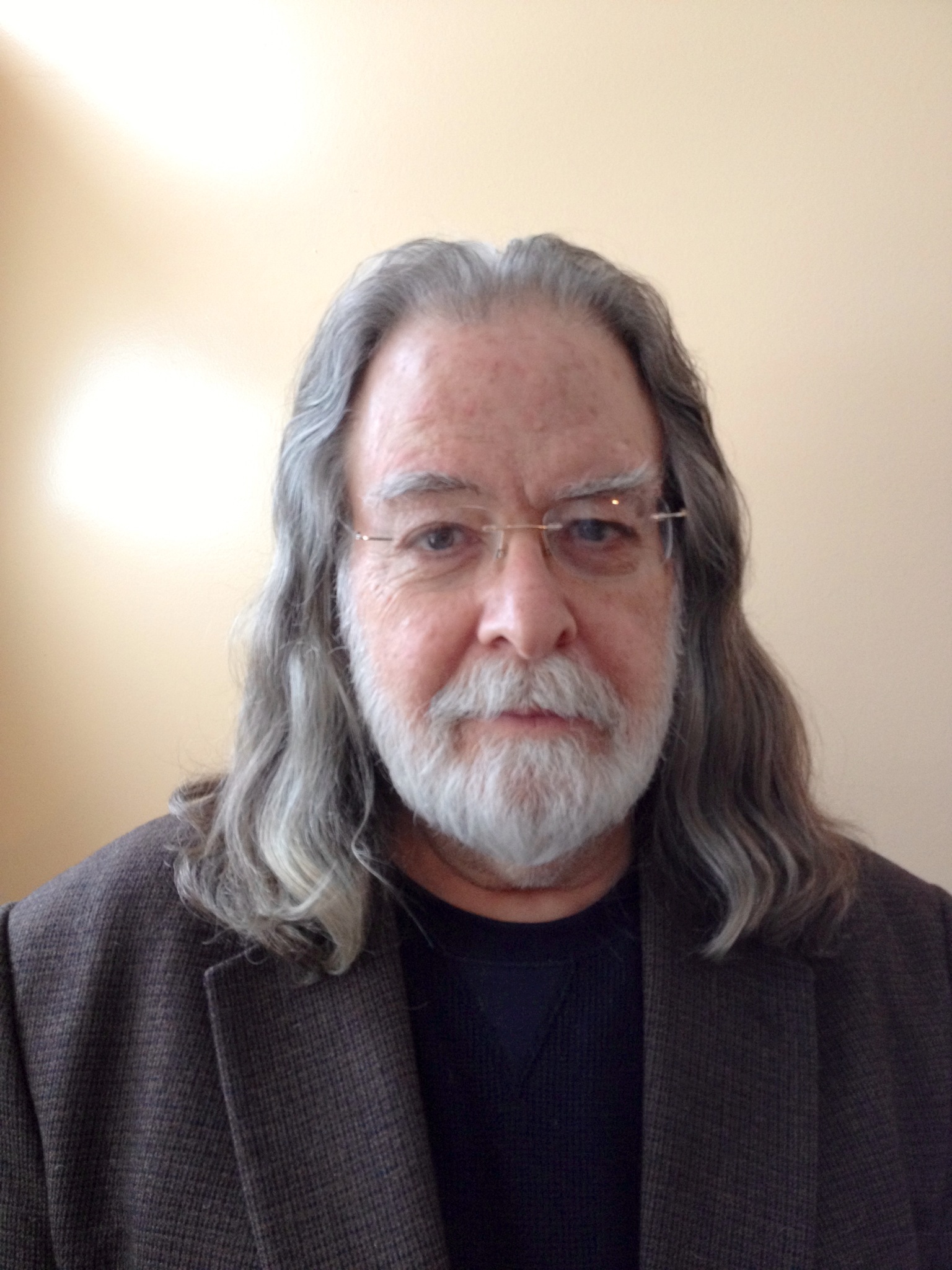 Nate Herman, co-founder of Films for the Ear

“Don’t make it about me!” pleads Nate Herman in a sudden burst of humility as we sip tea in a Rogers Park café. But it’s an impossible request, as Herman—actor, director, musician, comedy teacher, one-time “Saturday Night Live” writer, impresario and man-about-town—is the co-founder (with the similarly multi-talented Gary Houston, now producer emeritus) and driving force of Films for the Ear, a loosely organized band of friends and fellow travelers who specialize in live, quickly prepared staged readings of classic Hollywood movies.

Films for the Ear is all about Nate Herman’s passions, peeves and predilections. It brings together two of his loves—vintage movies and old-time radio theater—and pulls them together in the improvisational, audience-activating, something-wonderful-right-away style he learned at Second City, where he spent many years as a performer and director.

Long-range planning is not what FFTE is all about, and schedules are always subject to change. But as of late August, Herman and his gang have three projects lined up: the Jack Benny-Carole Lombard wartime comedy about German-occupied Poland, “To Be or Not to Be”; followed by “The Big Knife,” the Clifford Odets-penned drama inspired by the Hollywood blacklist; and the British comedy, “The Wrong Box,” with an all-star cast featuring Michael Caine, Ralph Richardson, Peter Cook and Peter Sellers. The plays will—probably—be staged at the City Lit theater space.

The project, which is more about fun than anything else, began appropriately enough at a party back in 2013. There, Herman and Houston noticed an eccentric, elegantly dressed local writer who reminded both of them of the President Muffley character played by Peter Sellers in Stanley Kubrick’s black comedy, “Dr. Strangelove.” The two began strategizing to put the movie, which both of them deeply loved, on stage in the form of an easy-to-mount reading.

Herman cast the show the way his mentor, the late Paul Sills—co-founder of The Compass Players and first director of Second City—would have done. “Paul would just get everybody in the room and say, ‘You do this, you do that.’ And it was always perfect.”

Using their extensive network of contacts acquired over a lifetime in Chicago theater, Herman and Houston were able to publicize the show, resulting in a full house at Evanston’s SPACE cabaret. “It was like ‘Rocky Horror Picture Show,’ everybody knew every line,” says Herman. “It came out so well, it was our ‘Citizen Kane.’”

Since then, Herman and company have adapted everything from classic thrillers like “The Maltese Falcon,” “The Third Man” and “Double Indemnity” to lighter fare such as “The Graduate,” “His Girl Friday” and “Miracle on 34th Street.” Actors—who are invited and not auditioned—have over time included many local performers, including Houston, Warren Leming and Bob Swan, as well as media figures such as retired Channel 7 anchorman Joel Daly, one-time “Saturday Night Live” cast member Tim Kazurinsky, Will Clinger of “Wild Chicago” and iO producer Charna Halpern. FFTE led a gypsy life its first couple of years, with shows popping up in such venues as the Wilmette Theatre, the Uncommon Ground restaurant on Devon and the Museum of Broadcast Communications. But the compact City Lit space has proven most amenable and has become FFTE’s abode. “It’s the perfect size and it’s really a neighborhood theater,” says Herman. “It’s a community space, and I like it that way.”

Community means a great deal to local boy Herman. He’s a product of the sixties, with roots in Chicago’s pioneering improv scene and early storefront theater, which were more about community building than career development.

Raised in West Rogers Park, Herman’s introduction to radio theater came at the tender age of twelve, thanks to Henry H. Mamet (uncle of David), chairman of the broadcast committee of the Chicago Board of Rabbis, for whom Herman gave his first successful audition. “I would play the kid on Mamet’s religious radio shows, whenever the script called for it,” remembers Herman. “I thought, ‘this is terrific, this is the best.’ I was always performing and playing music. Me and the mic, we became best friends.” A couple of years later, Herman took a theater workshop with Viola Spolin, the mother of Paul Sills and creator of the theater games that became central to improvisation, an experience he describes as “wonderfully wacky.” As for his love of movies, Herman says his two film schools were the legendary Clark Theater in the Loop and late-night television.

After attending the University of Illinois at Navy Pier—a two-year undergraduate institution back then, nicknamed “Harvard on the rocks”—and doing what he calls “silly theater” at the Pier Playhouse, Herman got involved with Josephine Forsberg’s theater workshop, which served as a training ground for Second City. From there, he joined the first Second City touring company, a matter of timing as much as talent, according to Herman. “It was by accident that I became a member of Second City, where I learned everything I know,” he says. “Every career move since has occurred the same way: happenstance.”

In the late sixties and early seventies, Herman and his friend Leming—who decades later would take on the title role in FFTE’s “Strangelove”—formed the satirical folk-rock band Wilderness Road, originally for the purpose of raising money for the legal defense of the Chicago Seven and other, similar causes. The band caught on and its albums retain a following.

After the group broke up, Herman, then in California, received a call in 1973 from his friend and fellow Chicagoan and Second City alumnus John Belushi, who was in a National Lampoon revue in New York. Belushi insisted that Herman join him in the show as musician and understudy, even sending him an airplane ticket. “It seemed like the easiest gig in the world until the next day the pianist-composer got his hand slammed in a taxi door,” recalls Herman. “I had one day to learn the whole show, including both piano and guitar parts.”

Herman wrote topical comedy pieces for NPR in the seventies, then got his big break, writing for “Saturday Night Live” during the Eddie Murphy years of the early eighties, when the program was under the direction of Dick Ebersol. “It was Ebersol who turned ‘SNL’ from a late-night cult show to the institution it is now,” says Herman. “Even [show creator] Lorne Michaels acknowledges that our fourth season was perhaps the best ‘SNL’ season of all time.”

When the “SNL” stint ended, Herman returned to Chicago and again gravitated to Second City, this time as a director. “I loved directing, but they disliked me, because it takes me forever to put on a show,” he says. He became friends with legendary improv artist Del Close who, according to Herman, “liked me because he didn’t have to play the guru with me.”

Since then there has been another California sojourn, teaching gigs at iO and elsewhere, and many writing and performance ideas incubated. It’s quite a resume, one that has left Herman still very much in love with the simple, playful, imaginative essence of theater but less so the logistical, organizational and financial scaffolding around it.

“I’m not big on structure,” Herman says. There’s no board at FFTE, no fundraising effort—“I’d be embarrassed to ask”—and not even a website, although a Facebook page is in the offing. “I just wanted to be able to call up friends and put on a show. But I mean friends who are good,” he emphasizes.

The movie adaptations come in two flavors: radio-style performances, with seated actors and sound effects, and fully staged readings, with movement, gesture and a rudimentary set. Both types of production are assembled in a single long day of work.

“We read through the script, do the blocking, take a break for dinner and do the show, before the blocking can be forgotten,” says Herman. “It ends up being a bit ragged but right, sometimes quite right.”

With its familiar material and DIY technique, Films for the Ear is an intriguing mix of nostalgia and experimentation, bringing together the aural, interiorized storytelling technique of old-time radio with the spontaneity and presence of live theater.

“The audience should always be complicit in theater,” says Herman. “Every show I do is like that, making sure the viewers are in on the joke.”

The adaptations reflect Herman’s personality, coming off as a warm-hearted cultural in-joke with as little distance as possible between actor and spectator. The FFTE format “is ideal for those involved and those who watch,” declares Herman. “There are no unendurable weeks of rehearsal and memorization for the actor, and after three minutes the audience forgets that the performers are holding scripts. Fully staged readings are the way to do theater.”

There is one caveat, however: “It doesn’t work with schlock.”