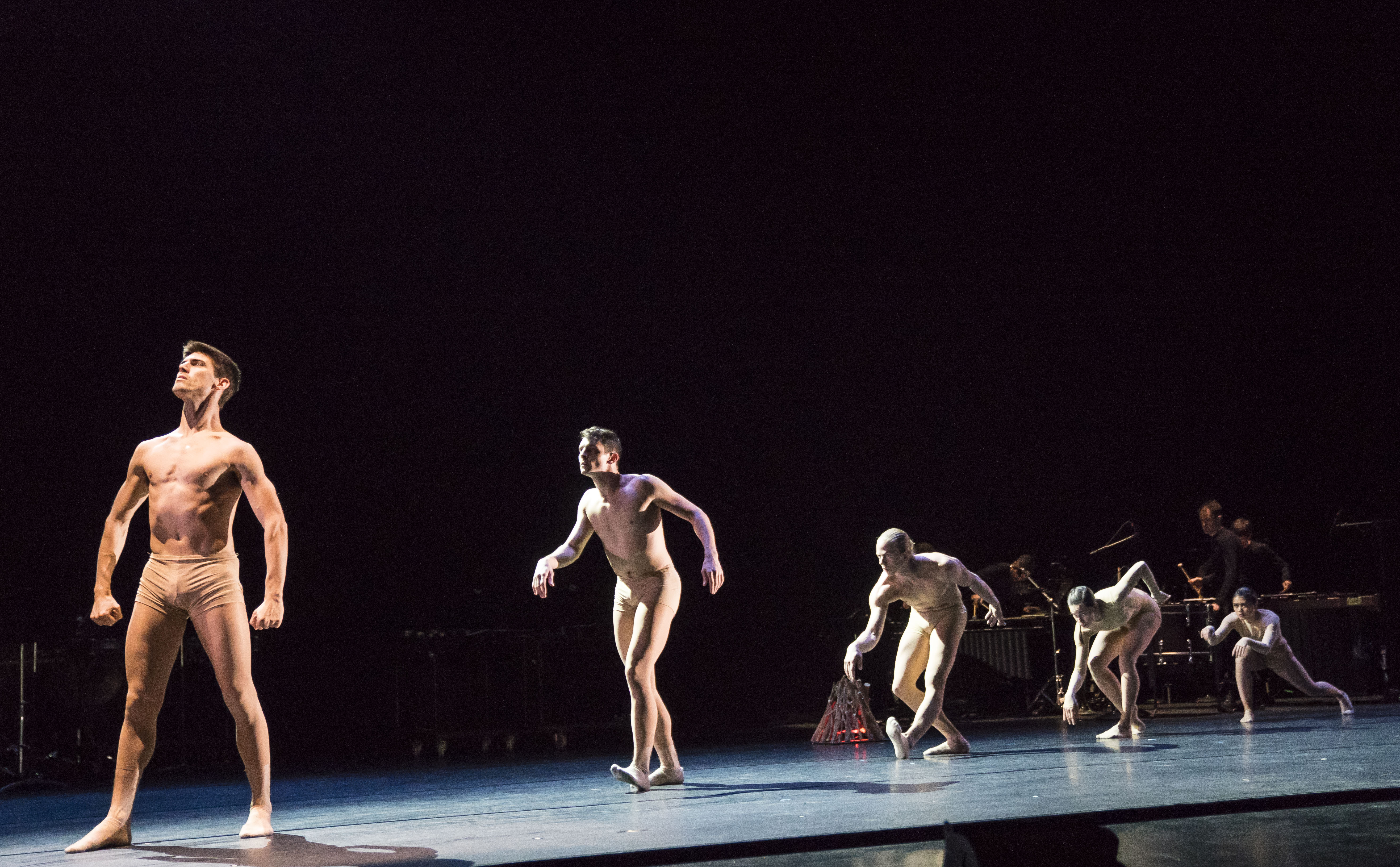 Those seeking light-hearted diversion from our present moment, turn elsewhere. For their Fall Series, Chicago’s leading contemporary dance company commissioned works—which unfolded as one evening-length collaboration—from young, emerging choreographers around themes of the physical and political environment. The resulting theater was potent, urgent and, with opening night falling on a particularly emotionally turbulent day in the news cycle, highly topical.

The collaboration included an extraordinary performance of compositions by Devonté Hynes from Third Coast Percussion, who, from a row of xylophones, gongs, bells and bowls flanking the stage, poured a ceaseless river of sound through the Harris Theater from well before the lights came up to after the curtain fell. The scene opened on “There Was Nothing,” a vision of creation as imagined by Lil Buck and Jon Boogz, the creative partnership known as Movement Art Is. Boogz and Buck are street dancers by trade, their movement style an impossibly complex orchestration of simultaneous isolations and waves within a single body that teases the eye and defies the brain. Once again, the Hubbard Street dancers showcased their superhuman versatility, taking to the tremendously detailed and difficult movement language as if it were part of the regular Hubbard Street vocabulary. Spoken word by Robin Sanders played at intervals, narrating a tale of a fecund Mother Earth whose beloved creation grows selfish and destructive, taking us from the formation of continents to blueprints and business meetings in minutes. We see forests rise from a clump of four dancers, humankind evolve from ape in two steps across the stage, a moment in the garden of Eden in a single glance. Then, in the blink of an eye (in keeping with geologic time), on with the clothing, out with the cell phones, the knit brows and strife. Mankind—at least the segment of it clad in a suit—turns its back on the Earth to hunch angrily over a phone, but does look up to observe a row of protestors marching downstage. The piece ends with six dancers holding blank signs, upon which you may imagine your own statement.

With no break, Third Coast Percussion continued into “Perfectly Voiceless,” a roughly ten-minute musical interlude that picked up the momentum of the first piece and carried it seamlessly into Emma Portner’s “For All Its Fury,” which opens with thunderous drums and lightening flashes. Mycologist Paul Stamets’ book “Mycelium Running” provided inspiration for the piece, as does Sylvia Plath’s poem “Mushrooms,” an ode to a quiet, unstoppable power of those oppressed. Three painted banners hang vertically from the flies to the floor and seven dancers weave through them, poking out heads and limbs at various heights. One dancer remains in view at all times, the only one dressed in a costume that will not change through the three sections of the piece. The movements of the group of seven are anxious, scuttling; they are a hive mind with odd moments of fraction. A few commonplace props appear and reappear: a cane, a plastic bag, a glass bottle which causes much to do. Portner’s vision is at times surreal, at times uncomfortably and, if you’re willing to go there, deliciously weird. She does not shy away from troubling images, conflict and partner work that toes the line of violence. In the second section the group of seven have changed into luminescent white unitards and are bound together by a web of elastic. They pull against one another, taking a very long time to move from stage right to center, the struggle prolonged, repetitive; progress is incremental in the extreme. The plastic bag periodically goes over a head and I, too, felt suffocated at moments in “Fury.” There was little space to breathe; it’s as though Portner wanted to include everything possible, to cram each moment with as many urgent ideas as possible, to make us feel the heaviness of the moment through abundance.

After the intertwined dancers break their elastic bands, there is a brief interlude between the solo dancer in constant costume and two of the percussionists; the stage empties except for these three, who walk slowly, ringing handbells in a tentative evocation. In the final section, the dancers, freed from their bonds, explode into broad, sweeping movements, clad in a variety of earth tones. They finish upstage, reaching upward, toward the light, and a painted backdrop of a giant mushroom. (Sharon Hoyer)