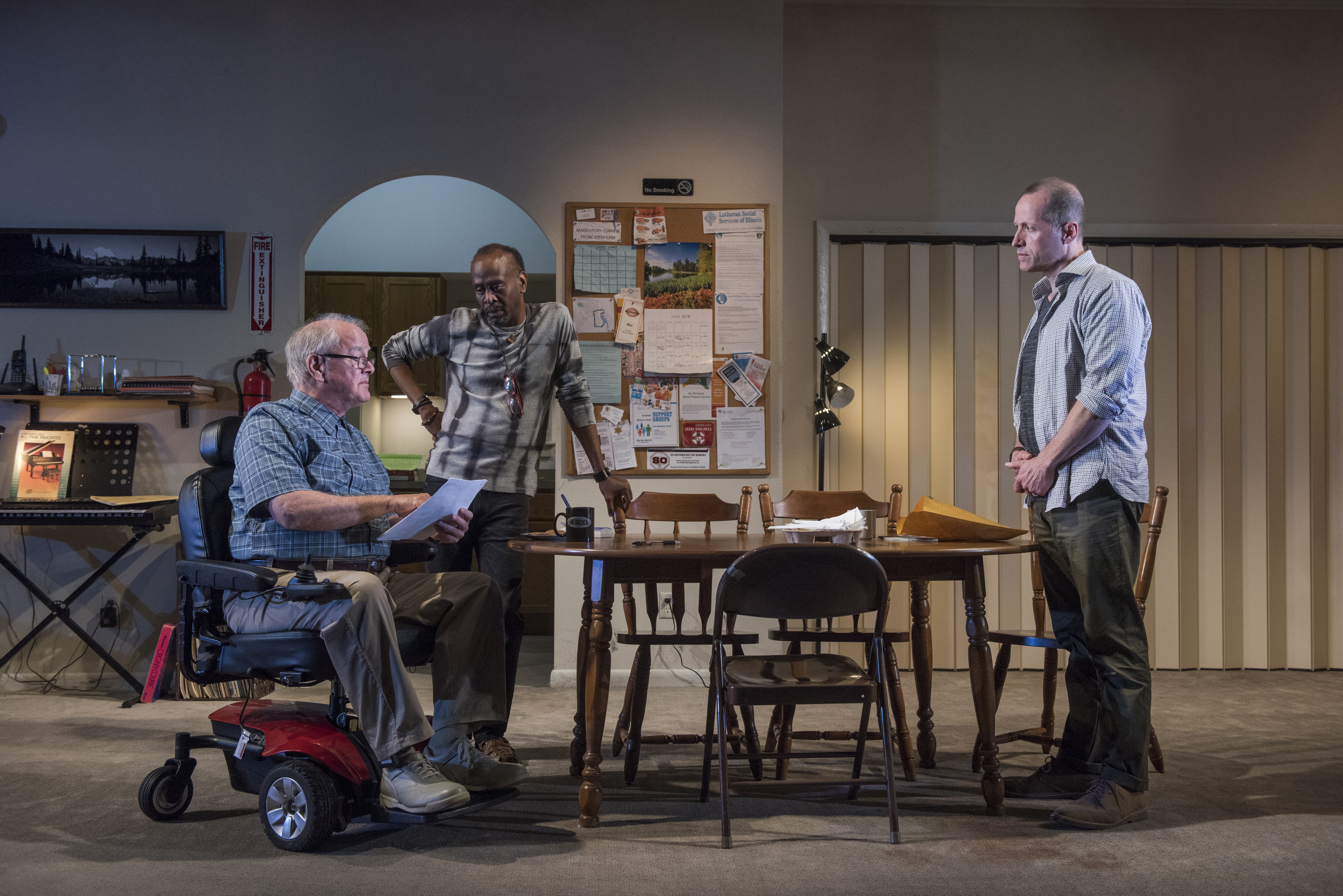 “This show is going to make a lot of money for Front Bar,” a friend joked after the opening of “Downstate,” the latest from Bruce Norris, a playwright whose work really ought to include a high-proof chaser. Indeed, this play is a clenching experience. The audience essentially becomes a shaken bottle of carbonated liquid with Norris twisting the cap ever-so-slightly throughout the play’s two-and-a-half hour runtime, offering temporary respite from our discomfort that only makes us feel worse for wanting to escape what these characters cannot. Casting himself as savior-sadist, Norris plays his audience like a tune, a modern Übermensch standing his ground between the increasingly alienated ends of the political spectrum who are, as he sees it, equally to blame for the state of the nation. The political forces at play in Norris’ imagination are illustrated here as the pitiful pedophiliac inhabitants of a halfway home in rural Illinois and a middle-aged man who, with a strongly-worded statement in hand, seeks to purge himself of his pent-up resentment at the potential cost of their humanity.

“Downstate” is a play that attempts to redraw the counties of abusers and victims in order to swing votes for the former. It is a cautionary tale about the potential for retributive impulses that even the most well-meaning liberals are apparently susceptible to and capable of. The reason I can say this with such certainty is because I, like thousands of other audience members, read it in the play’s program. Like so many supposed superior intellects, the playwright can’t help but explain why he, the rational moderate, is in the right.

Here are some things Bruce Norris wants you to know:

“Even positive social movements like #MeToo run the risk of tipping over into vengeance as those of us on the left attempt to purge ourselves of any strain of ideological impurity… We’d prefer to luxuriate in our righteous hatred for each other right now, in a way that feels cruel and grotesque and tribal.”

“And I thought ‘well I extend [my sympathy] to anyone to whom the world would deny sympathy.’ I’m not just trying to be contrary or perverse… I guess I feel that way because, for some reason, I instinctively dislike consensus. Consensus makes me uncomfortable because it feels like a civilized form of bullying, since it’s never perfect and always manages to marginalize some dissenting voice.”

First of all, being inherently distrustful of a consensus that has almost no effect on your day-to-day life while approaching it as a theoretical argument when in reality it affects people’s livelihoods (literally, as in whether they will live or die) may not be exactly “contrarian,” but it is extraordinarily privileged, though the two are known bedfellows. And if Norris’ particular sympathies are that susceptible to the tides of groupthink, then his confidence in and insistence upon them becomes doubly unnerving.

And about this idea that “positive social movements” (thanks for the tepid endorsement, btw, your safety pin is in the mail) run the risk of becoming “vengeful”: this is a gross mischaracterization of the intention, not to mention the capabilities, of said movements. What they are trying to do (while receiving considerable static from folks like Bruce Norris) is hold people—who, yes, are almost exclusively men, a misfortune of their own making—accountable for their behavior in an attempt to curb what has essentially been a multi-millennia onslaught against the autonomy of others, from rape to the almost-assured rollback of Roe v. Wade.

Even with celebrity endorsements, the #MeToo and #TimesUp movements do not have the political, social or cultural clout of the religious right. An allegation is not even remotely comparable to legislation in terms of the “damage” it can do. If we want to talk truthfully about vengeance against the slightest of slights, why not start at the White House or Congress for first-rate examples. Norris seriously misunderstands the dynamics of power if he can equate the forces that got Donald Trump elected with the movements that have sprung up in fear and legitimate anger about the kinds of people deemed worthy of running (and subsequently ruining) this country. To do so while suggesting that a psychiatric disorder (pedophilia) and a social disease (rape culture) are comparable is not only ignorant but downright deranged and dangerous.

Norris’ concern about the fate of men is a variation on the “one poisoned Skittle” logic, a troubling metaphor rolled out whenever the continuation of supremacy seems at stake, which also serves as an ironic contrast to the received cultural wisdom about what to do with bad apples and the  bushels they come from. This line of thinking places higher value on the fictional idea of an innocent man whose life and career could be destroyed by an unsubstantiated accusation and the watershed precedent that might be set, than on the survivors whose lives have already been destroyed, curtailed or unjustly limited, all in an effort to protect the fragile dignity and questionable sanctity of all men. Yes, I mean all men.

The thing about this hysteria over due process, its absence or ellipsis, is that it tends to deflate when you actually listen to anyone who has ever even attempted to press sexual abuse or harassment charges, who can tell you just how difficult, personally and legally, it is to bring the accused to justice. Bill Cosby has been sentenced to three-to-ten years, which means that at max he will spend only two months in prison for every woman he is alleged to have assaulted. Woody Allen recently lost a multi-picture deal with Amazon. Meanwhile, Roman Polanski and those who fund his projects are plowing ahead. And to top it all off, Brett Kavanaugh will probably end up on the Supreme Court. And that’s just a brief and select overview of the past four weeks of human history.

These are not high-profile exceptions, they are the unwritten law of the land. Unlike the characters in Norris’ play, most of the men who abuse and assault people will never be subject to the carceral state and never experience the post-carceral societal retribution that Norris seems overly concerned with. The stakes for men (especially white men), despite the legitimate but disingenuous criticisms of our deeply flawed justice system within the text of this play, frequently amount to little more than discomfort and inconvenience. Meanwhile, survivors risk their lives just to speak out about the violent inequality they’ve experienced.

But, sure, let’s make space for both sides.

For those of you who have made it this far and are reasonably wondering, “I thought this play was about pedophiles?,” it is and it is not. Norris has leveraged a maligned group as a way of talking about the very politically incorrect (and virtually nonexistent) power of victims. The production pits the ingrained goodwill of Tim Hopper (Andy), as a survivor of childhood sexual assault, against everyone’s favorite grandpappy Fran Guinan (Fred), the perpetrator of said assault. With the assistance of K. Todd Freeman as Fran’s loyal and flippant roommate Dee, who undermines Andy at every turn, Fred comes out ahead, a disabled elderly man who is seen as having been more-than-sufficiently punished for the damage that neither he nor Dee seem to take seriously. It is excruciating to watch Hopper unpack Andy’s guilt and shame, while explaining the far-reaching psychological effects of trauma, to men who are responsible for it, directly and indirectly, and also unreachable. That pain was due in no small part to the fact that we watched and listened to this very same thing unfold all last week, only the survivor wasn’t a man and her audience was far from indifferent.

Is “Downstate” a well-acted and well-written humanizing portrait of a modern-day leper colony? Sure. Is it a nuanced discussion about pedophilia free of ulterior motives that would undercut the moral ground upon which its scribe alleges to stand? Well, that’s what comment sections and post-show discussions are for. Personally, I can’t shake the feeling that Norris is justifying a personal belief system that he barely maintains by treating a disenfranchised and complicated social group like a prop, which is the height of modern politics. His play feels calculated, a word not unjustifiably applied to his previous work. Another friend suggested that this play was the least Bruce Norris has ever been in his own way. I think she’s right but I am uneasy about what the outcome suggests. If this false equivalence of power dynamics is how Bruce Norris really feels, then I think it’s appropriate to ask how responsible it is to program his work. Given that this play has already been gifted rave reviews from publications of considerable more clout and reach than this one and is slated to move to London’s National Theatre after it wraps locally, that suggestion already feels depressingly moot.

The narrative of male endangerment is a red herring that many are willing into existence with blatant disregard for optics and the actual absence of empathy for truly marginalized groups. There’s this idea that when people show you who they are, you should believe them. In that case, I, for one, believe you, Bruce. (Kevin Greene)