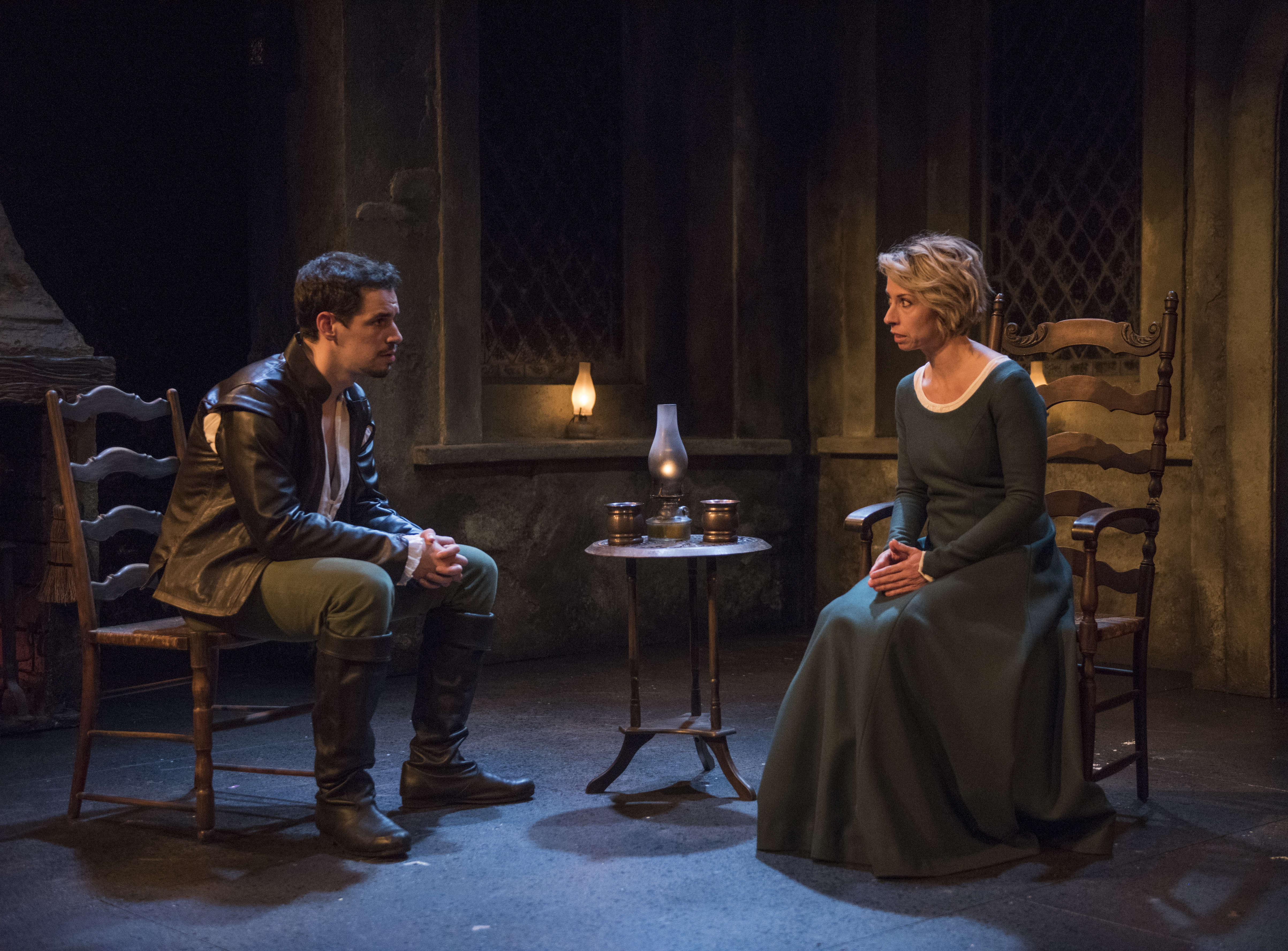 I… I don’t really know what to say.

This is an unfamiliar feeling. For me. But hang in there, will you? Let’s do this together.

I guess I’ll start by speaking directly to everyone involved in the Writers Theatre world premiere production of Jen Silverman’s play “Witch”:

Thank you. You are all individually so talented and your talents are so well and beautifully applied and in concord with each other. You have clearly worked so hard in a way that makes the final product look entirely effortless. Every single artistic choice you made felt justified and essential. Your hair was perfect. The work you are doing matters and I hope you know that, deep down, even when you’re doubting yourself because you’re only human and that’s what humans do sometimes. This thing you made, that you pulled out of the ether with your hearts and minds and bodies, helps and I am grateful for it.

To Jen Silverman, without whom there would be none of this: You have written a diamond. A hard, sharp, lustrous thing made from the bones of what came before. It swallows our dreary daylight and returns it immaculate. How the fuck did you do that? Follow-up: are you a witch?

To Marti Lyons, specifically: you are literally a genius. I am in awe of you. It was an unspeakable pleasure getting to witness your work with this specific cast and crew. In the parlance of my generation: you killed it. It is dead. Long live it.

To Writers Theatre, broadly: you put the money in the right place. Good job. Keep it up.

And to the remainder of my imagined audience:

On the drive back to Chicago, I went on an emotional journey while listening to Coldplay. Now, unless you’re one of about three or four people potentially reading this, it’s fair to say you don’t know me very well. Or at all, for that matter. And that’s okay; we can always amend that. Nevertheless, please know that this is not a normal occurrence and that I have made an actual effort to make my feelings about Coldplay, ahem, known. Don’t get me wrong, I have a heart and have been known to adore a pop song in my day but listening to Chris Martin sing some blue-eyed sadboy ballad about having had everything except the one thing he truly wanted (which, given the patriarchal and heteronormative streak of mainstream pop radio, was probably the love/adoration/emotional, mental and physical possession of a woman), only to then subsequently lose all of the aforementioned things, did successfully get my heartstrings thrumming in the back seat of an old Toyota on Peterson Avenue in the middle of a perfect evening in early October. I felt a tenderness inside, one I didn’t know could be there, for Chris Martin or any man for that matter. It was a nice feeling to feel. I’m already forgetting it and that makes me a little melancholy.

Did that work? Are you endeared? Have you made up your mind to take the Metra out to Glencoe on one of your few nights off because some critic (a cishet white critic at that) wrote an odd review with no actual information in it, just a story about the perhaps-unfairly-maligned English pop rock band Coldplay, an imploring to attend a show that you willingly clicked on a review of—so we can at least agree that you’re curious about the show or this critic’s take or both—and what said critic hopes reads like a sincere and simple statement of gratitude, albeit one adorned by meta commentary?

I can sense you need more and I get that. This is a journey for both of us. OK:

I laughed. A lot. Like the kind of laughter where you get a headache and a cramp just behind your lung that feels like the onset of a panic attack and you want it to stop but, oh please please please don’t stop. And I laughed the kind of laugh where you feel like you’ve just seen a really topnotch chiropractor. Like your alignment is so fucking aligned and your feet and neck don’t hurt for any reason anymore. And your health insurance covered it.

And I cried. Not like a child but like a full-grown human living in this time and in this place who feels the fuck out of his feelings (the empaths know what’s up) and in whose lap has been delicately placed something of profound truth only to be patiently followed with something, placed with the same measure of care, of equally profound hope. And what really got the waterworks going was the feeling that the two didn’t have to be separate. That they could be the same.

I am sorry I’m not saying more about this play. I really am. I want to, believe me. But what a limiting word! “Play.” If I accept the precedent, that this is what those four letters mean, it is going to make everything better and more difficult simultaneously. This is what theater (a longer but still insufficient word) can be and this is what it can do and if you need reminding of that—and you do, even if you think you don’t, even if you’re so immensely satiated by all the work you have the privilege to witness that you couldn’t possibly imagine having a real need for more theater in your life, whatever this upstart young theater critic who evidently has some beef with Bruce Norris has to say—you have to go. You have to.

I hope that was enough. ‘Cos it’s the best I can do. For right now. Plus, we work on deadline, so this is going to have to suffice.

I’m going to leave you with a simple question because that’s my prerogative:

Would you burn it all, I mean everything, to the ground if it meant we got a chance to start again? (Kevin Greene)