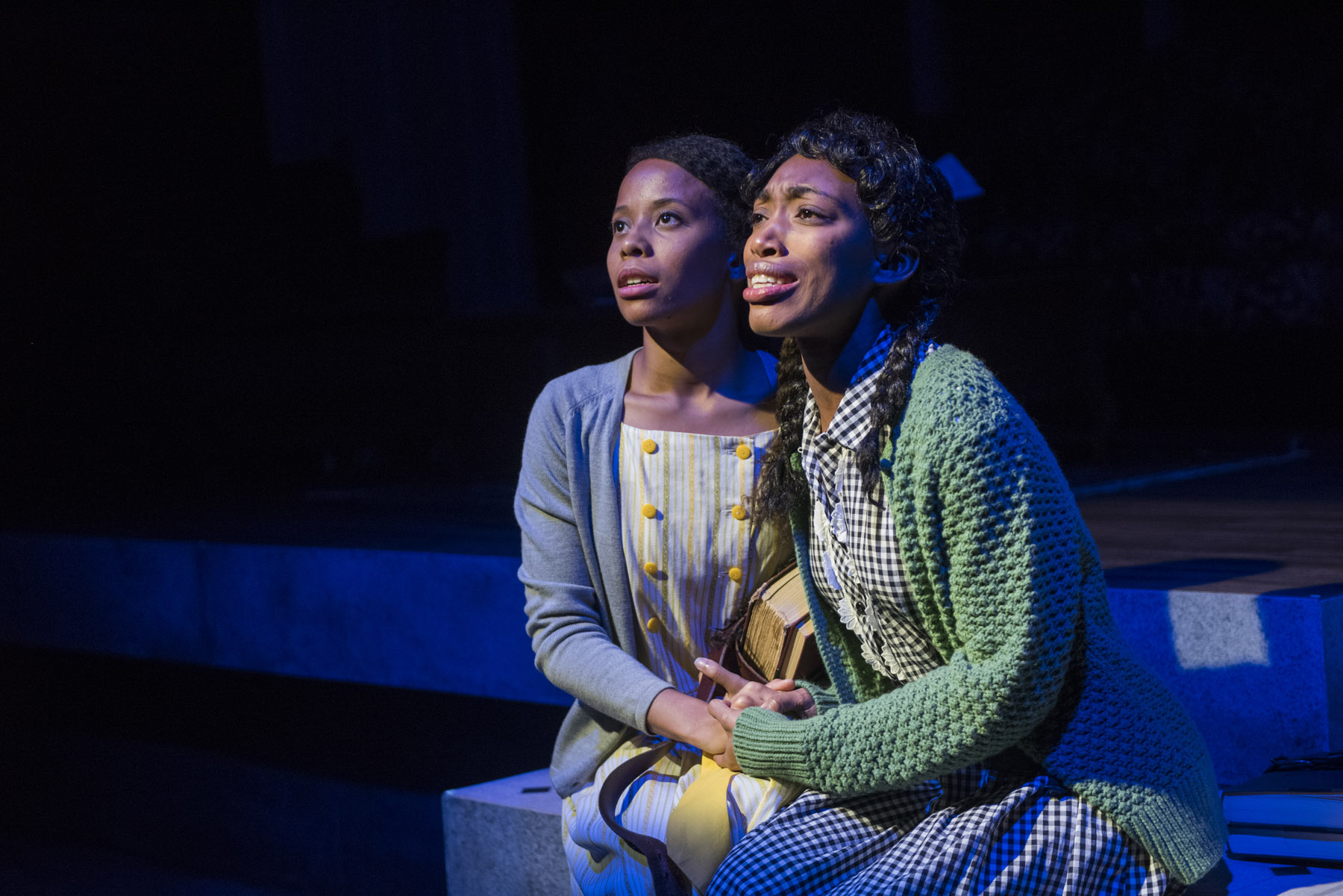 In the movies a perfect resolution comes in ninety minutes. In the movies, the dad is often shown as the hero. In the movies, things usually turn out for the better. So why isn’t real life like that? Such are the ponderings of seventeen-year-old film buff Ernestine Crump.

But the movies are just a means of solace for Ernestine (Chanell Bell) and her younger sister Ermina (Brandi Jiminez Lee). They recently lost their mother. In his search for answers, their father Godfrey (Terence Sims) transplants the family from Florida to Brooklyn to be closer to Father Divine. And although Father Divine keeps watch over the family from his place above the mantle, his International Peace Mission doesn’t bring much peace to the Crump family.

Jiminez Lee tackles the outspoken Ermina with impenetrable wit. She dares to say the things that may be on everyone else’s mind even to the chagrin of her father. This balances out Bell’s more soft-spoken, Ernestine whose goal first and foremost is to graduate high school. They are home for one another in the unfamiliar city.

It’s 1950. The Crumps are the only black family in their building, perhaps even on their block. Ermina and Ernestine are growing up in the flux of McCarthy’s Red Scare and the beginning of the civil rights movement. They’ve just begun adjusting to their new life when their vivacious aunt Lily Ann Green (Brianna Buckley) bursts onto the scene, bringing with her the communist ideals, sexual liberation and libations Godfrey strictly prohibits.

Buckley is a vision in red when she arrives. She cannot be looked past and her revolution will not be ignored. Her presence commands attention. She makes herself an example for the young women of the house as well as those in the audience. Aunt Lily is there as the motherly voice of reason when there isn’t one. A reminder to the girls that it isn’t their job to simply exist.

“Sometimes we don’t understand everything,” Lily explains to Ernestine.

We are sixty years removed from the world of this play. Yet we are evermore connected to it. Between the Black Lives Matter and #MeToo movements, the Kavanaugh appointment to the Supreme Court and countless women coming forward against abusers, we are sorely in need of Aunt Lily’s guidance.

“I was intended to stay silent,” Lily tells Ernestine. She encourages the girls to be proud of who they are and where they come from no matter what the world has to say about it. She tells them of their African roots, reaching peace with enemies through music and making their own decisions, something that their own father cannot do.

Godfrey is constantly writing down questions for Father Divine. He cannot move forward. He marries a white woman named Gerte (Emily Tate) without hearing back, however, because the Father himself did it. He is searching for answers among the heavens, fitting as the set designed by Arnel Sancianco has the family back-dropped by clouds.

With little guidance from the good Father Divine, Godfrey’s constant hesitation is a point of contention for the four strong women in his life. As is felt today, the women tiptoe around Godfrey’s needs, concerns and feelings while often excusing their own. Which leads Ernestine to constantly ask, “When is the revolution coming?” (Amanda Finn)