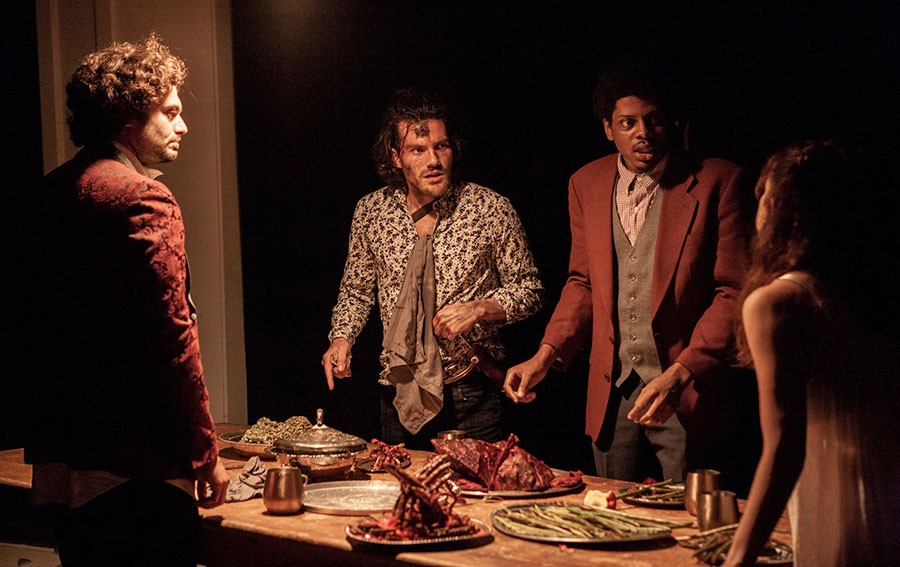 The cast of “Phoebe in Winter”/Photo: Leslie Schwartz

I can’t quite organize my thoughts around Jen Silverman’s “Phoebe in Winter.” The way power liquidates, attaching to roles instead of people, is deeply unsettling but all too familiar. Maybe, though, in Facility Theatre’s variation of the play, this is intentional: the set and audience sit on a stairwell in a church basement. Plates are broken. The Grammas (Emmy Bean, Sarah Thompson Johnson and Zachary Angus) wear wigs, masks, crowns and upholstered cloaks. They sing and they whisper. Meanwhile, there’s a bathtub under the dining-room table.

Crotchety patriarch Da Creedy (Kirk Anderson) and mistreated maid Boggett (Shawna Franks) await the return of the household’s sons from an unnamed, distant war. Each, in turn, arrives: first Jeremiah (Jacob Alexander), then Anther (David Dowd). Then Phoebe (Maria Stephens) shows up with a gun in her hand, making demands, key among them: “You killed my brothers. I had three. So now you will be my brothers. And I will live here and you will care for me. And a man’s enemy shall be they of their own household.”

Restorative justice in action. When the final son, Liam (Elliot Baker) arrives, it’s with a gaping hole in his head.

Silverman’s script is clever, sculpting lines with such beauty that they sometimes catch you and drag you beneath the water, beneath the asphalt, down, down into the night sky. She asks questions of accountability, trauma and geography, using logic so alien that it circles right back around to good sense. This, she displays, is the stunning absurdity that epitomizes our society, our patriarchy and our white supremacist culture. This play knows the landscape and makes itself effective.

So, we’ve got this excellent script, a show full of extremely competent performances (Franks and Stephens are especially on point) and dado’s sharp, moody directing. But somehow, the world never comes together. Each performer operates in a story independent of the others, disorienting the viewer. On a theoretical level, this is fabulous. On a ground level of “Get My Attention and Keep It,” it makes engaging for the full hour-and-forty-minute duration difficult.

It’s a matter of anchoring: the play jimmies with roles and identities like they’re marbles. Without a baseline aesthetic shared by the actors, it’s difficult to track what is intended chaos and what is unintentional.