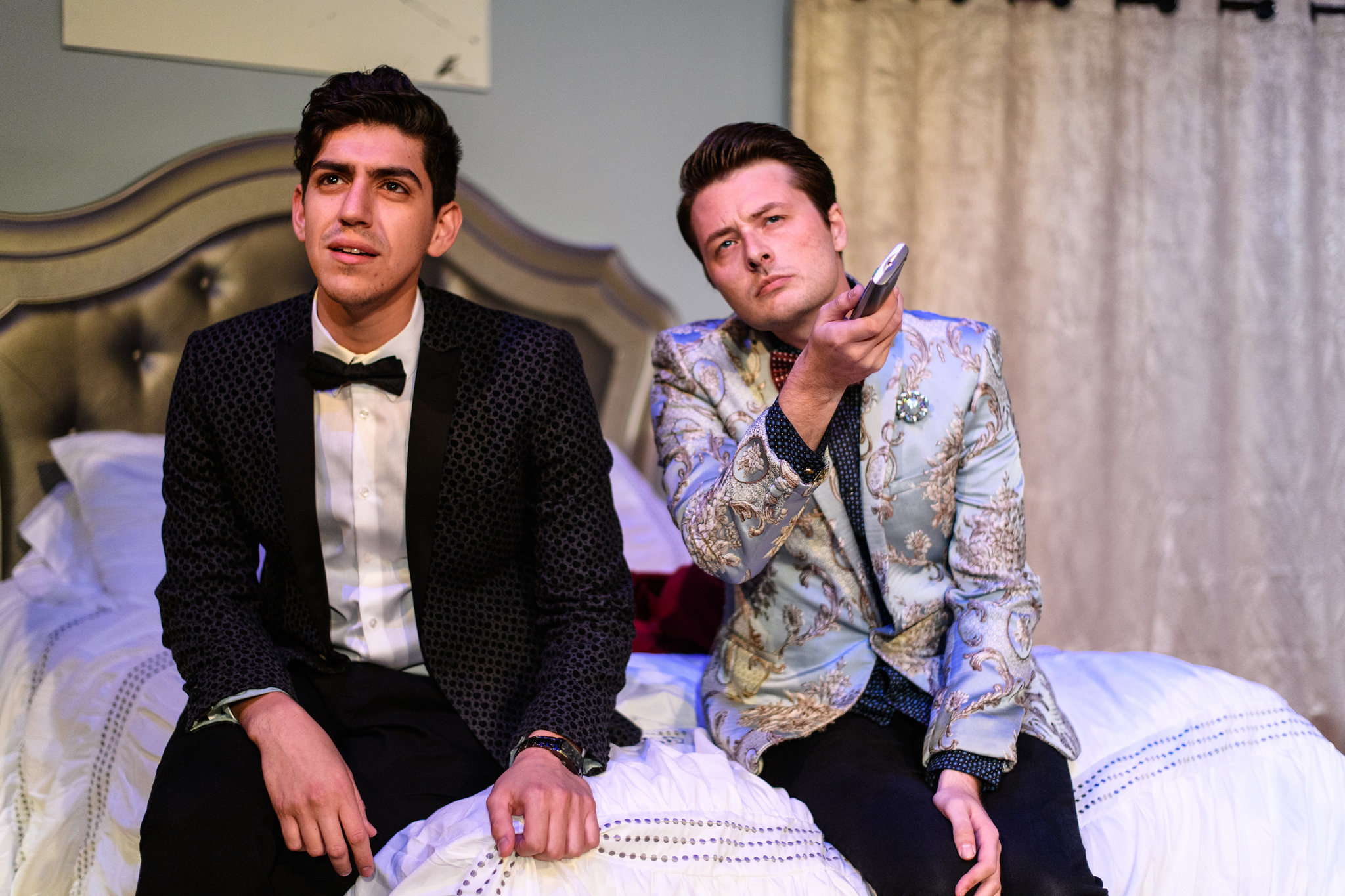 “Who cares about a nonentity like me?” wonders critic Ira Gwin (Jeremy Trager) as the cast of “The Golden Egg” anxiously awaits Ben Brantley’s review in the New York Times following the opening-night performance.

Who cares indeed. With the playwright, producer, leading lady, director, the playwright’s best friend and a fresh-faced actor-coat check guy anxiously awaiting reviews for pull quotes it only begs Ira’s question. What’s in a name if you aren’t the biggest name in town?

“It’s Only a Play” is a rewrite of Terrance McNally’s unsuccessful “Broadway, Broadway” from 1978. The updated version premiered in 1985 and made its Broadway debut in 2014, but this production at Pride Films and Plays is different than even those two productions.

Because this play is chock full of name-dropping.

Who knew the cast of “Hamilton” showed up to after-parties in their Continental Army coats? Or that Pope Francis attends after-parties at all? And if the cast of “The Lion King” shows up in onesies and the coat guy checks them, are they all naked?

In a business where networking is so crucial, it’s no wonder there is so much emphasis on names in this play. And there are a few names to look out for.

Ira, to start, is the vitriolic kind of critic audiences are familiar with. The typical villain-type who looms large in the background and gets a thrill in putting others down. (The kind that I am happy to say I am not.) His perfect foil is Christopher Young as Gus, our coat-check guy. Young plays Gus as adorably starstruck and eager to please. He’s delightfully optimistic to Ira’s ambivalence.

Then come the chaotic characters: Virginia Noyes (Sarah Hayes), Peter Austin (Kevin Webb), Frank Finger (Cody Jolly) and James Wicker (William Marquez). This lot of passionate artists just want to be understood. Jolly’s frenzied director Frank would very much like it if people called him out on his bullshit. And Hayes’ frenetic diva makes clear from the get-go that her energy is a force to be reckoned with.

Side note: while the performers’ occasional yelling livens up the space, the constant on-and-off of the loud “crowd noise” every time the door opens followed by muffled noise after it shuts is more distracting than informative.

Finally there is Julia Budder. Bless Marika Mashburn. Thank Dionysius that this lovable lady is playing the well-intentioned producer who doesn’t always know what’s going on. Bless everything about Julia’s blind ignorance to the nastiness that lurks in the world of theater and her prayers to the theater gods. We do, after all, rely on “the kindness of strange people.”

Obviously, there is a lot going on in “It’s Only a Play.” The cast of seven effortlessly fills the space as if they were a cast of seventy. It’s a play that theater lovers can truly appreciate, which makes one quote in particular evermore troublesome: “Theater became a place to make a million.”

That line serves as a sobering reminder that despite her endearing malapropisms, wealthy socialites like Julia Budder have a great deal of sway in the modern theater. As much as artists want to create their art, they need the funds to do so. There is a lot to be said for a recognizable name in this performance world.

Even so, McNally has given us something. A gift to the theater folk that, while general audiences may enjoy, is especially meaningful to them. We get the in-jokes. Even if you haven’t set foot on a stage in thirty years, you feel a kinship with the artists. You feel like part of their story.

You feel like they know your name, too. (Amanda Finn)