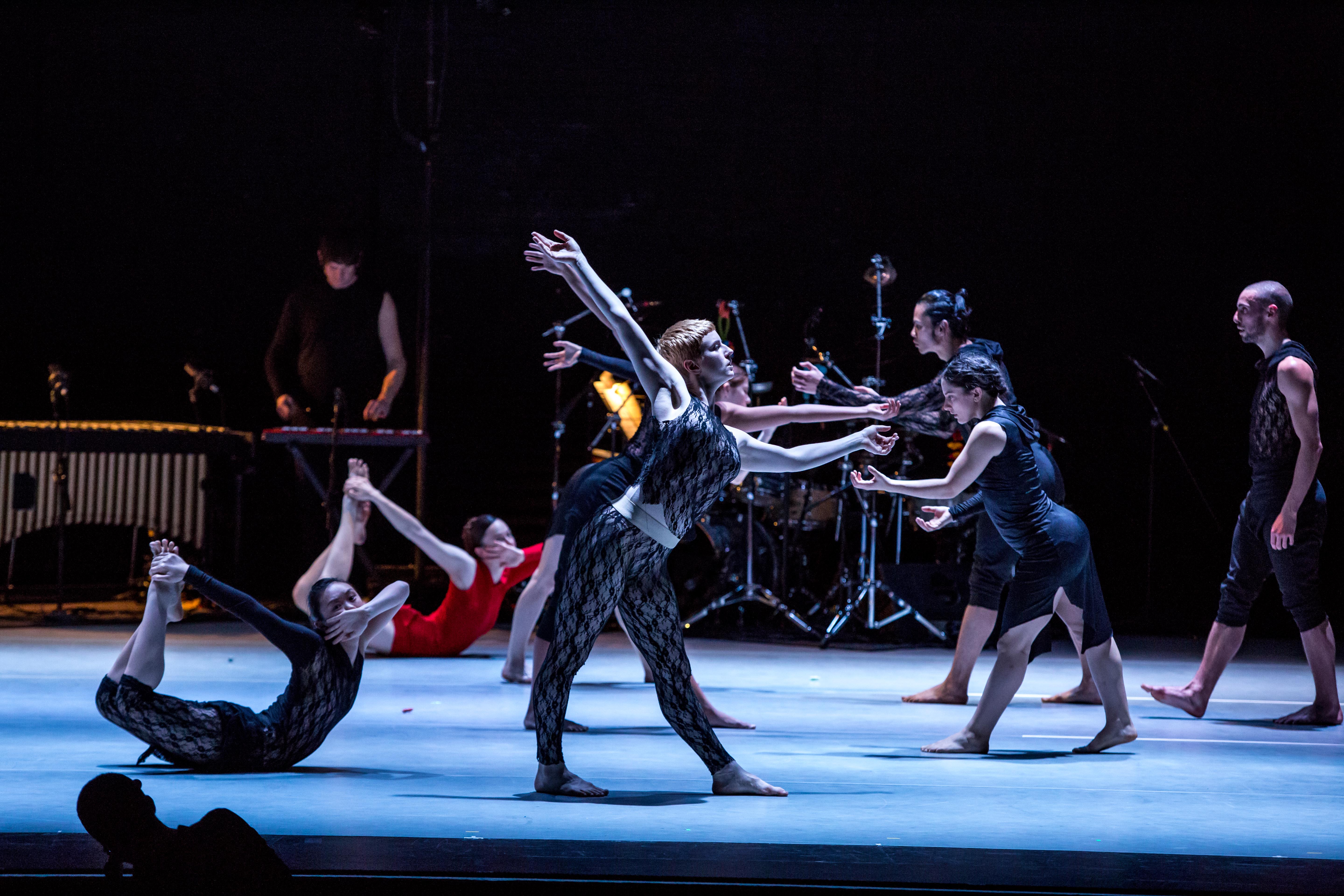 After years as rehearsal director of the world-renowned Tel Aviv-based Batsheva Dance Company, Danielle Agami emigrated to the United States with a vision: to start her own dance company, informed by the innovative movement techniques developed by Batsheva director Ohad Naharin, and grounded in her own approach to teaching and the discoveries of individual dancers. With Naharin’s blessing, Agami taught Gaga—his now-legendary technique—in the United States for several years, but is quick to note that Gaga is just one aspect of the choreographic approach in her Los Angeles-based troupe, Ate9 Dance Company. Ate9 visits Chicago for the first time November 16 in a one-night-only program at the Auditorium Theatre, sharing the bill with Chicago companies Visceral Dance Chicago and Deeply Rooted Dance Theater. They will perform “calling glenn,” an hour-long collaboration with Wilco percussionist Glenn Kotche, who performs onstage alongside the nine dancers in the company. I spoke with Agami over the phone about upcoming performance and the origins of “calling glenn.”

How did you and Glenn Kotche connect for this project?

Catharine Soros [a director of the Music Center of Los Angeles County] knew us separately and offered us the opportunity to get to know each other. We were randomly lucky to be introduced. Since then it’s been ongoing and the flow is spectacular. We do a lot and we make changes with ease. The communication is great between us; why we make things is very similar and how seriously or not we take things.

What was your creative process for “calling glenn?”

It started from Glenn literally sharing with me any piece of music he made in recent years and I shopped from a very large collection. It was broad what I could work with. Then I created an order, then came with requests—make this faster, this longer, add this beat—he gave me permission to ask for what I wanted. Every few weeks we flew him over. It’s nice to feel we’re still in process—he’ll be here in a few days. It’s been a clean dialogue with me as director. He shows a lot of trust and it sets me to succeed.

How has the piece evolved since you first created it?

I feel it can go deeper and sharper and we keep growing with it. There will be one section in Chicago that will be completely new. And our cast has been refreshed with new company members.

And did the title come from your long-distance collaboration with Kotche?

I actually named the piece twenty-four hours before I met Glenn. I received a donation from Glenn Kawasaki and I promised I would name a piece after him. For me “calling glenn” is like calling for help. To ask for help and be helped. In my time in the United States I find it harder and harder to ask for what I need, to ask for help. I had to name the piece because the press release was going out. Funny enough, twenty-four hours later Catharine introduced me to Glenn Kotche. No one believes the title has nothing to do with Glenn Kotche, but there’s no point in explaining it. The name Glenn could be replaced by anyone. But the drummer can’t. The piece is so much for him and with him.

Why did you choose to establish a company in the United States?

There is hunger and talent here. Not everyone can move to the Middle East and dance with Batsheva. It feels right to be working here.

You mentioned “calling glenn” having to do with asking for help.

The piece is coming to explore the wonder of human connection and interaction. We are all really different, but we have secrets that are mutual. The piece comes to touch it. I do like how the understatement and overstatement of the movement and the music come together, so when we meet the audience, it’s an open offer. It’s all in the viewer to allow yourself to be touched by those offers. It’s delicate and I think it’s generous, but it’s not apologetic or discounting the process for the viewer.

Making commodity from air, from a moment, is so much how I like to treat life. The moment leaving a mark on me, having another conclusion, another experience. The audience feels how eager the people on stage are to have a truthful meeting. I’m quite confident we’ll have a powerful meeting on that stage.