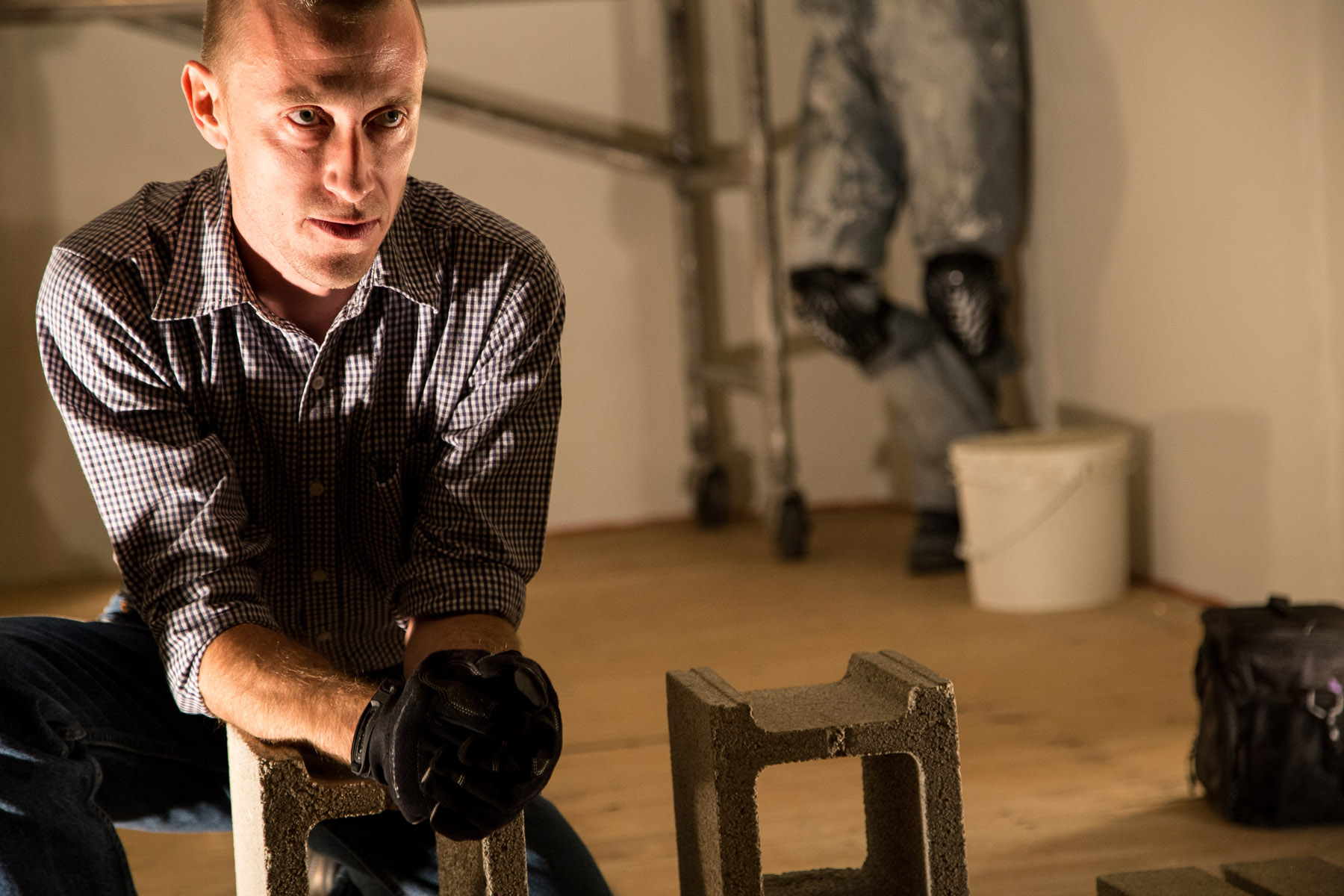 A random ordering of four smells I experienced during Maxim Dosko’s “Radio Culture” at TUTA Theatre on Thursday night:

The room is close: fifteen seats, all but one filled. I sat next to friends, strangers, critics, an old teacher, the director. The room is noticeably longer than wide and the set—brilliantly, efficiently designed by Eleanor Kahn—looks unfinished. Dry caulk on eggshell walls. At one end: me. At the other, a scaffolding, painted, unpainted, who cares? You can stand on it. You can move it. It doesn’t matter if it looks good, the point is it works. Right?

Volodya, a construction foreman (Kevin V. Smith), works. His workers (Huy Nguyen, Wain Parham) work. His workers, Volodya will tell you, also drink. Too much. And the quality of their work? Subject to how much they drink and the whims of the day. Volodya talks about the whims of his day. He wakes up in a grate in the wall. He researches the price of meat —he’s getting one for his mother’s upcoming birthday—and he inspects the work of these shoddy buildings. He talks about his reticence, his anger, his kindness.

In his moments of frustration, he goes to his car and listens to “Radio Culture,” a state-run radio show of arts and cultures, which he will tell you, he’s never had much interest in.

There is no “story” here. Instead, we are party to Volodya’s experiences: the room becomes him and we introspect with him, stare at who he is and the illusions he has of himself. We watch his empathy, his patience, his dreams challenged by the evils of banality (and vice-versa) all while the slowness of a deeper humanity takes root in him through these mundane struggles.

“Good stories happen to those who can tell them.” I heard that on “The Moth” podcast once and took it to heart. Director Amber Robinson maybe did, too, because she knows how to tell a damn good story.

Smith is focused and energized. He makes Volodya’s despaired fatigue authentic without dragging us down. Meanwhile, he channels Volodya’s most mundane observations and his most private dramas with a flood of life. The elegant movements, designed by Victor Bayona, walk a fine line between abstract and material and enact upon us something beyond pure entertainment or pure intellectuality.

This is amazing, intimate, beautiful, political theater, interested in the functionality of aesthetic slowness. Profoundly good technical work aside, this is a show that has a cis white character speaking for a little more than an hour straight. Could Volodya have been a person of color or a non-binary actor? To ask questions of identity would only expand and deepen this work, already a sublime piece of art. (Jay Van Ort)