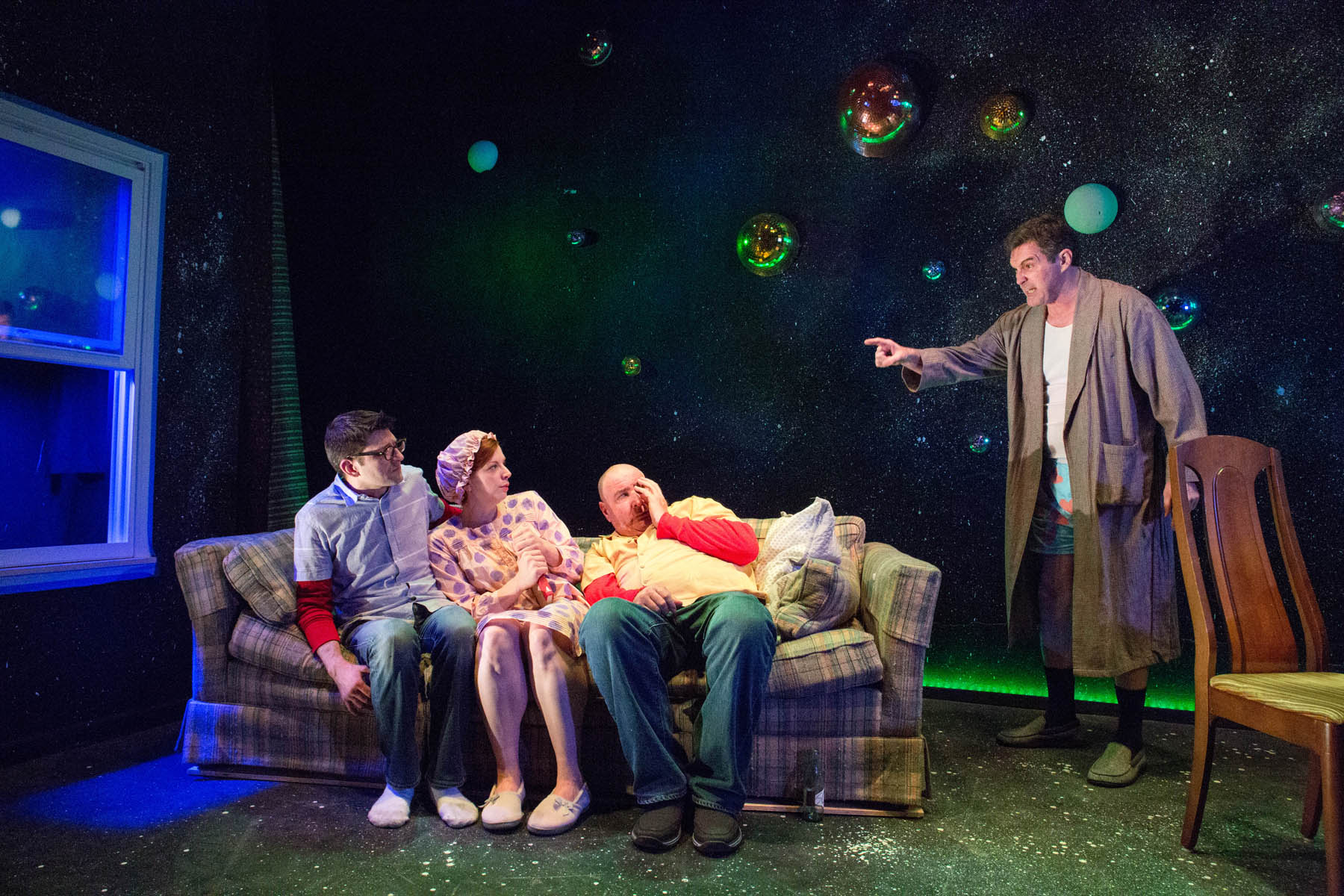 Playwright David Rabe rose to prominence in the seventies with work that took a magnifying glass to the lingering effects of the Vietnam War on the human psyche. In recent Chicago ventures “Good for Otto” and “Visiting Edna,” Rabe brought a microscope to the worlds of mental health and terminal illness. With “Cosmologies,” making its Midwest premiere at The Gift Theatre, where Rabe is an ensemble member, the microscope has ballooned into a telescope with its sights set on space, the universe, and the grandest philosophies of life and humanity.

To concisely summarize “Cosmologies” would be a fool’s errand, but let’s give it a shot:

Teenager Eric (Kenny Mihlfried) has run away from home to escape the apparent burdens of his life and finds himself at a hotel in Chicago. A pimp named Richard (James D. Farruggio) sets Eric up with a prostitute named Teddy (Darci Nalepa), whom Eric is instructed not to kiss. Eric kisses her anyway, leading Richard to stab Eric. As Eric lose blood, we are transported into the depths of his mind, or maybe a parallel universe, or maybe a hallucination where Richard is now his father, or maybe still the pimp; Teddy is his mother, but also still the prostitute; and an escaped convict (John Kelly Connolly) is hiding out in their idyllic fifties-era home.

This all happens in the first thirty minutes of the nearly two hours and thirty minutes of Rabe’s dizzying exploration of philosophy and human values, and before the arrival of a distressed priest (Gregory Fenner) and two cops (Martel Manning, Hannah Toriumi) whose supreme comic antics are a breath of fresh air in a second act that runs out of fumes.

Everyone involved in this production, under the direction of Gift Theatre artistic director Michael Patrick Thornton, is working at the top of their game, from the understated lighting design of Charlie Cooper to Angela McIlvain and Courtney O’Neill’s transformative scenic design. There are brilliant performances across the board from a cast made entirely of Gift Theatre ensemble members. But the ultimate irony of Rabe’s script, filled with as beautiful poetry as any other play in his overlooked career, is that in his search for meaning in the vastness of everything, he doesn’t reach any philosophical conclusion about anything.

Moments of violence and assault, especially toward the character of Teddy in the second act, could arguably be brushed aside with “dream logic,” but that same logic can’t explain why the three actors of color in this production are relegated to the most minuscule characters in the play.

At the top of the second act, Eric waxes poetic (a common theme in this play) while staring out of his telescope into the “limitless inky blackness” of space when the Convict (or maybe it’s his brother at this point?) tells him, “Excuse me, I don’t understand it.” Right there with you, buddy. (Ben Kaye)