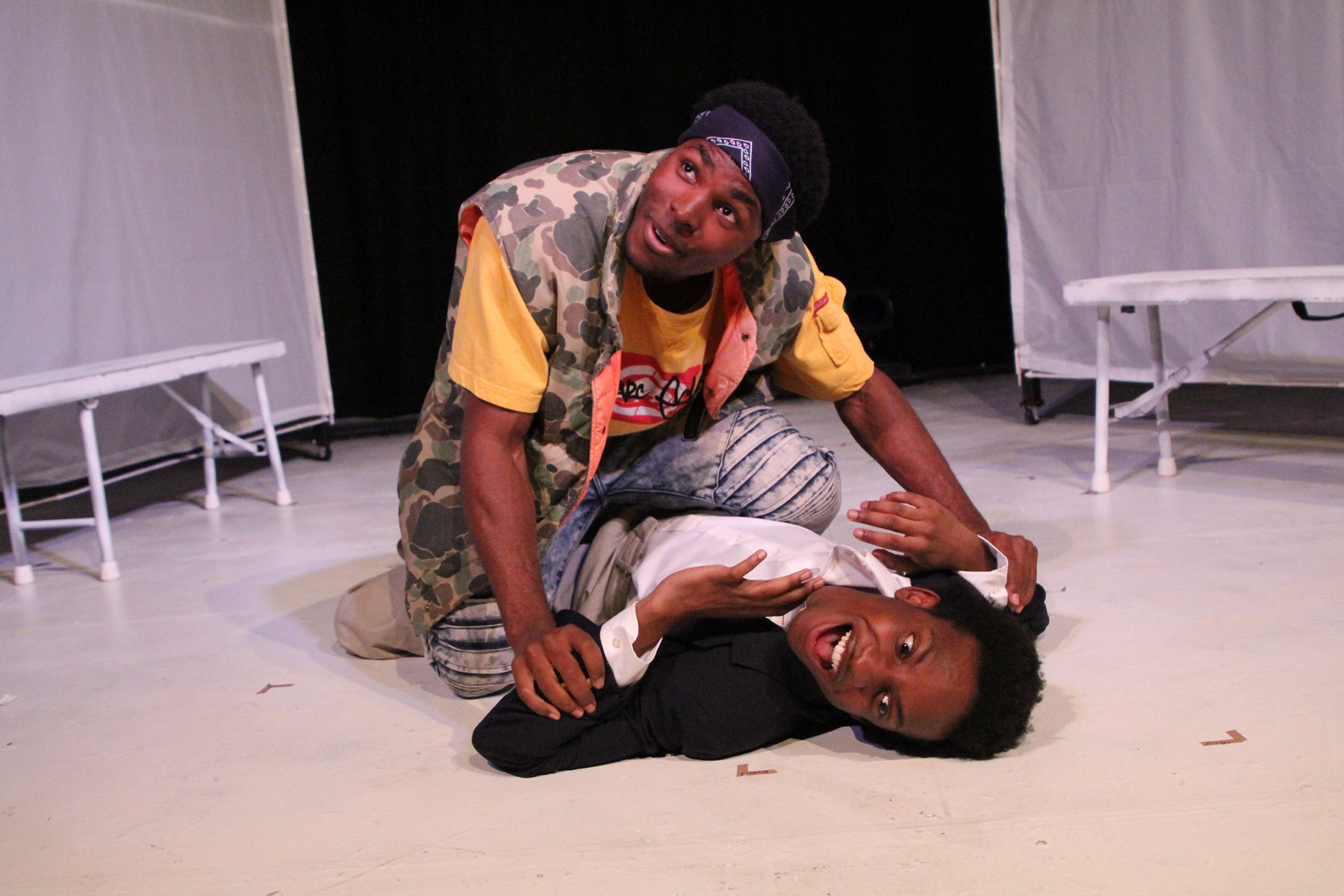 Jalen Gilbert, Jayson Lee/Photo: WHO IS SHE Photography

I’m of two minds. I believe that, as a white person, I am entirely unqualified to speak to much of the content of Tearrance Arvelle Chisholm’s “Hooded, Or Being Black for Dummies,” a play that is about, among other things, two young black men hashing out criteria that quantitatively and qualitatively describe their respective experiences, which are disparate yet deeply linked.

I also recognize the reality that there are white folks out there who, consciously or not, need a fellow white to co-sign on the thoughts, feelings and expressions of people of color in order to perceive them as valid and, in some cases, non-threatening. This is doubly frustrating if you take into consideration the physical, mental and emotional energy extolled just in surviving racism, never mind having to prove its existence while justifying your own. These are not experiences that I have had. But they are the experiences of my friends, colleagues and fellow humans. I believe them and so should you.

“Hooded” is a play attuned to layers and consequences. Prior to the show, an onstage projection (designed by Sid Branca) reads, “You will be instructed when to laugh. Laughing at any other time makes you a racist.” The pre-show announcement, made by Brian Nelson Jr., encourages audiences to keep their phones on, stay scrolling and attendant to the world outside the theater because, “None of this is important.”

It’s gallows humor—about as literal as it comes—and it sets the stage. Marquis (Jayson Lee) and Tru (Jalen Gilbert) meet in jail where the former has been arrested for trespassing (he was “Trayvon-ing”—a jarring meme-ification of a hate crime—in a graveyard) while the latter is there for “being while black.” A series of initially repetitious scenes sets a structural pattern that is picked up and dropped at will throughout. “Hooded” is tonally flexible, moving between philosophical dialogues, satire and abstraction, with each new mood adeptly handled by director Mikael Burke, though it feels at times that the play overflows with more interesting ideas than it has adequate time and space to explore.

The play’s characterization of white people is perfectly pat. Here, self-serving obliviousness and post-racial utopianism is as threatening to black life as outright hostility. What is almost more painful than what the white characters say is how they say it, squeamish in the half-awareness of their bigotry but selfish enough to push forward anyway. And while useful stereotypical shorthand abounds, Chisholm embraces the confounding effects of white supremacy as when Casey Morris’ suburban not-so-bad boy goes full Dolezal, inspired by an instruction manual that bears the play’s title. Confronted by Maggie Scrantom’s insistently insensitive mean girl-type, who goes from being turned on to feeling threatened, the scene is dizzying and discomfiting, like watching a gold medal performance in the sport of appropriation.

It feels like no exaggeration to say that appeasing white people is a means of survival, whether as an individual or a theater company. And so I found myself wondering where I had been accommodated in “Hooded” and where I had been pushed. I felt uncomfortable at times, though I tend to insist that I appreciate discomfort, as long as it proves illuminating. Yet I also acknowledge that a symptom of white privilege is setting the terms of engagement with discomfort while having the freedom to redraw those boundaries at any point. I laughed, even when I was not instructed to, and so by the rules set at the start of the play, I am a racist, which is true in the sense that I am the beneficiary of white supremacy. This internal ricocheting seems like an unenviable measure of success for a production. Yet here I am days later, and I still cannot get this play out of my head even if I wanted to.

I felt actively, and not necessarily gently, called in by “Hooded.” Despite how frequently people of my race, gender identity, sexual orientation, ability, et al are responsible for the continuing minimization of already marginalized people, the sensation of having accountability engendered within me by a work of art still catches me off guard. I expect this has quite a lot to do with a tendency to set myself apart from stage and screen representations of people who look like me, feeling smugly beyond these depictions while failing to recognize the greater implication that I am more like them than I am not like them. Credit where credit is due: “Hooded” is unequivocal in ways that make it unforgettable. It pierces the privilege cloud. And that’s a risky move, one that pays off in a currency set by an unpredictable exchange rate, subject as it is to fragile economy of white feelings.

Outside the theater there is no flashing sign to tell me how and when to feel. And things are no less—indeed they are much more—complex. And I wonder how I’m going to get through and then I remember that was never in question. (Kevin Greene)