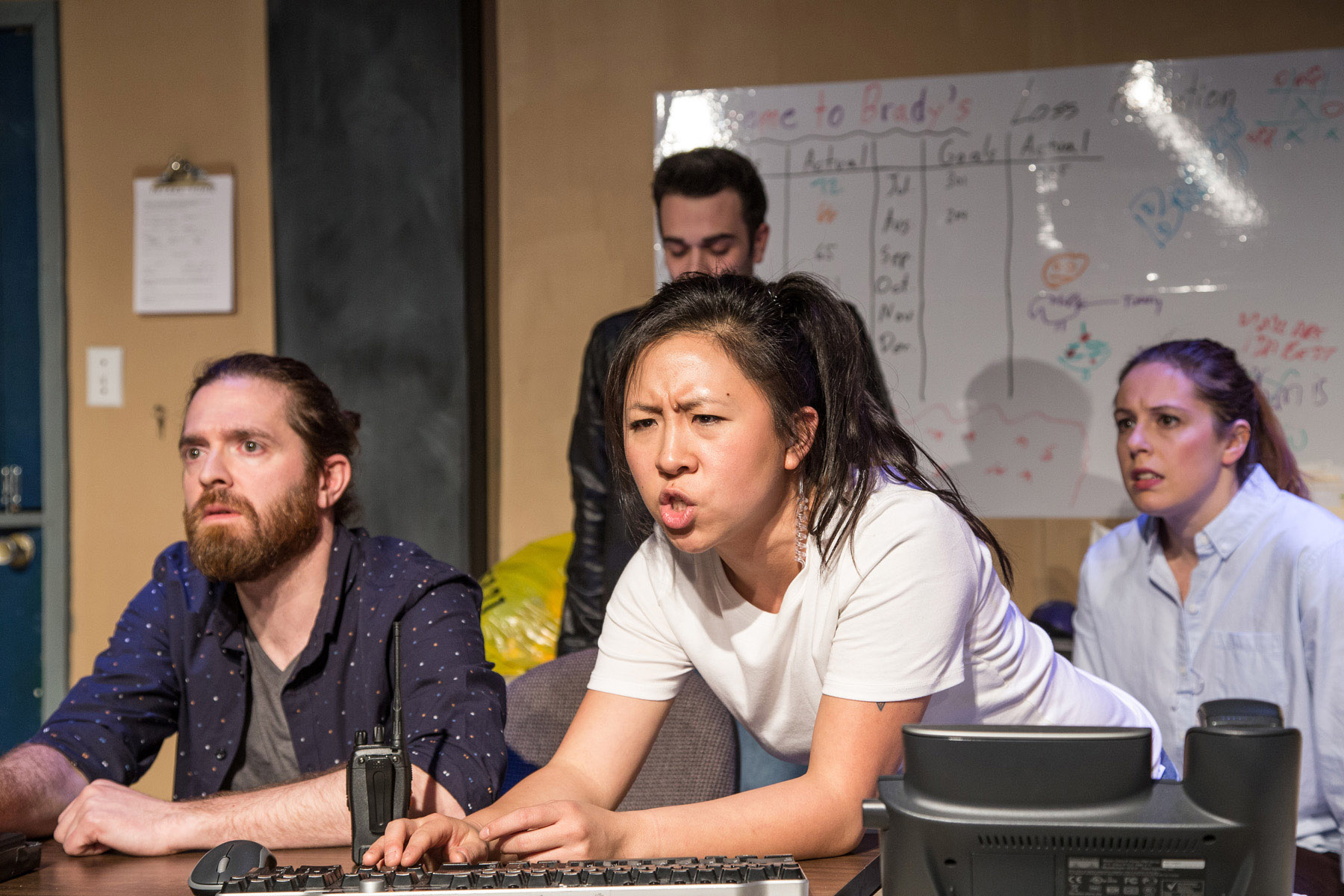 There is nothing plain about “Plainclothes.”

The dialogue constantly overlaps, tensions rise, friendships come to a head, the linoleum floors are unappetizingly beige, unseen corporate higher-ups make life hard for everyone and the first scene made me hungry.

I’ve rewritten this review in my head a million times. I’ve actually re-written it a few times as well. Nothing seemed to do this show justice. I even requested the script from playwright and co-director Spenser Davis in case I wanted to pull quotes. But pulling quotes without entire pages of flowing dialogue would be a crime. Instead, I found myself reading the play in its entirety, twice.

Inspired by Davis’ three years as an undercover security guard for a retail store on Michigan Avenue, “Plainclothes” is the story of a team. A team of plainclothes guards at a store called Brady’s. It’s their story. But it’s also a Chicago story. According to Davis’ note in the program, “Plainclothes” is the first of a trilogy of Chicago-based plays he’s calling “The Mag Mile.”

Like retail, however, the team isn’t isolated. They exist in a store community with salespeople, mall guards, Chicago police and even shoplifters. They feel isolated in their long-forgotten office space, but there is nothing isolated about policing even if (especially if) you’re a store security guard.

This is where I need to stop telling you plot points. Telling you more is detrimental to the work. Theater like this needs to be experienced the way we experience life. Moment to moment, not knowing what is coming next. We don’t hear every conversation in a room full of people talking. You won’t hear every snippet of conversation in this play either. Don’t expect to, or you’ll miss the point.

When you see this show—hoping you look past the conversational nature of this review—think about the times in your life when you’ve been halted. When suddenly you feel trapped between a rock and a hard place. When you see that behind the glimmering facade of the public galleries there is that nasty underbelly of systemic oppression lurking in a back room. Take that uncomfortable feeling and put it in your pocket.

Bring it with you to this show.

And this is the point when I realize I have never written a review without being able to call out certain performers for over-the-top performances. “Plainclothes” is ensemble work at its finest. Even the actors with less stage time shine when they come in. That is an amazingly positive side effect of the workshopping done by Davis and co-director Kanomé Jones. This play is, undoubtedly, a collaborative gem.

If you love wonderfully dingy backrooms like the one designed by Evan Frank: see the show.

If you’ve ever worked retail, shopped retail, seen how the capitalist system is ridiculously oppressive or wondered how social media can negatively impact life: see the show. If you have ever been victimized by or have ever seen others victimized in any capacity anywhere by a system they cannot control: see the show.

If you’re a human being living in, visiting or thinking about Chicago: see the show. (Amanda Finn)