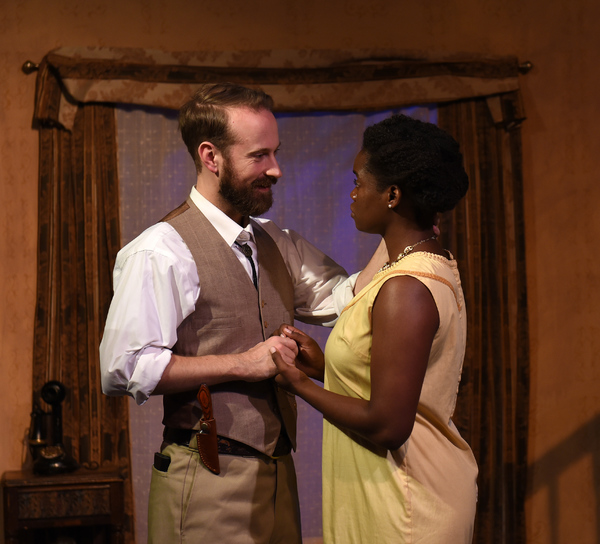 Eclipse Theatre Company closes its William Inge season with his 1957 play “The Dark at the Top of the Stairs,” Inge’s last Broadway hit, thought to be his most autobiographical work.

Set in the home of the Flood family in twenties Oklahoma, his play spotlights the foibles and frustrations of Cora (Aneisa Hicks), wife of traveling salesman Rubin (Chris Daley) and mother to shy teen Reenie (Destini Huston) and ten-year-old Sonny (James Leonardi). The unhappiness is pervasive: Rubin roams the country selling harnesses in a time when cars colonize the roads, while meeting up with mistresses in every little town along the way; Sonny avoids bullying peers and loses himself in movie-star fantasies; Reenie likes playing the piano, but only with the door shut. In their real and metaphorical absences, Cora seems trapped alone in a house that is haunted by undefined shadows, not only upstairs but leaking into the house from every door in Cassandra Kendall’s lighting design.

In Hicks’s portrayal of Cora, the constant negotiation between desire and duty comes alive in a woman of embattled spirit who, by fate and social convention, is defined by her relationship to others. We see this voracious loneliness in Cora’s every gesture, the smothering affection she applies to her children, whether she coddles or scolds them, her alternate commands and entreaties to her wandering husband to come home, her pleas to her sister Lottie (the archly neurotic Sarah-Lucy Hill) to keep her company. When she and Rubin fight, the walls vibrate with their bellows. When she and Rubin kiss, the windows practically steam up. Lottie gulps candy and gnaws leftover chicken to make up for the lack of drama in her life but tells her depressive husband Morris (John Arthur Lewis), “We’d be in the loony bin in less than two days with them in the house.”

School-aged interlopers Flirt (Hilary Schwartz), Sammy (Zachary Alexander), and Punky (Tony Rossi) allude to troubles greater and smaller than the claustrophobic lives of the Floods; the sense of how unremarkable the Floods are lends gray despair to their woes. Under Jerrell Henderson’s direction, Eclipse’s production walks the line between realism and melodrama with strength and ease. (Irene Hsiao)