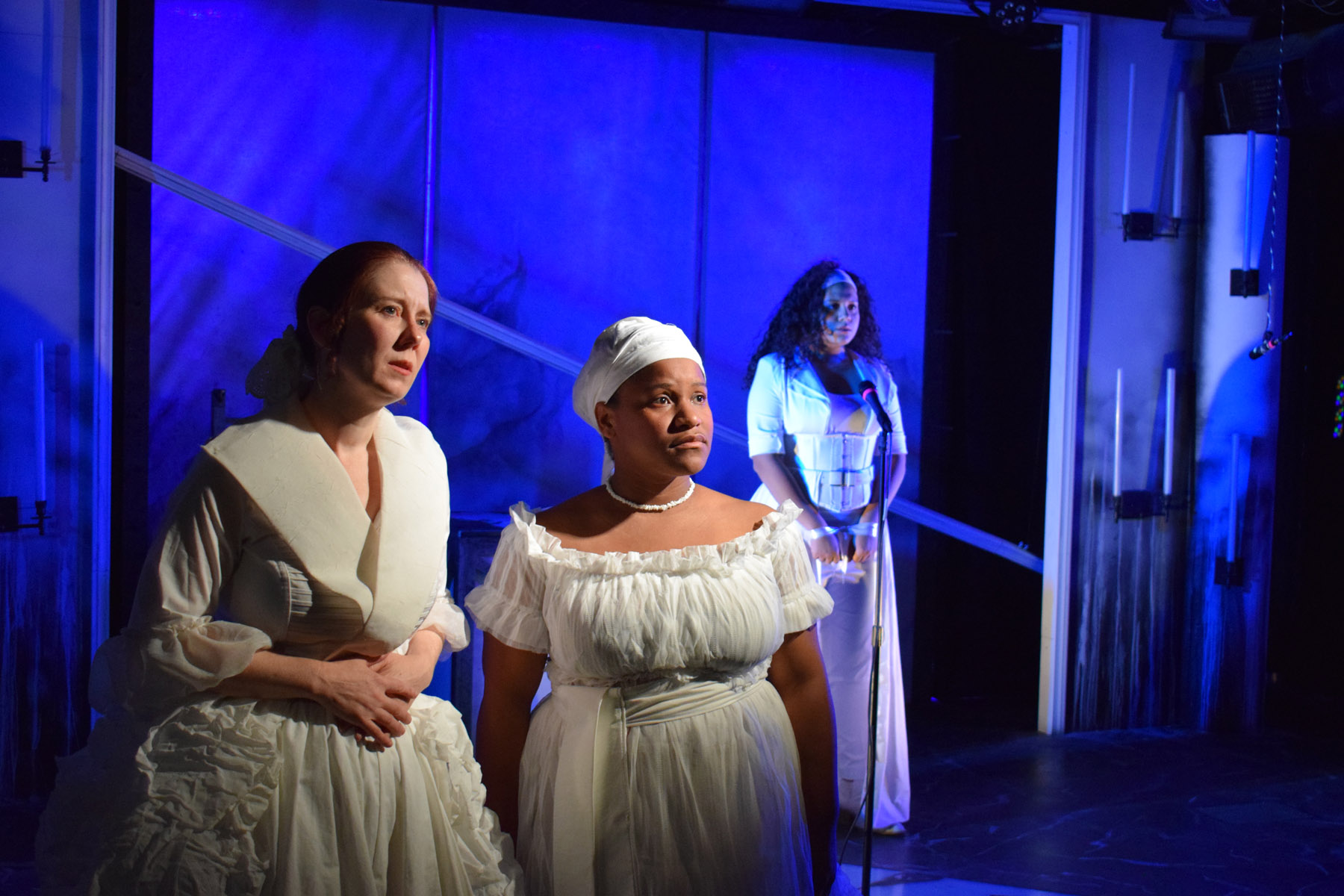 Lauren Gunderson is the most-produced female playwright of the 2018-2019 theatrical season, just as she was in the 2017-2018 season. Audiences across the country have gotten to know her work over the past few years, and many will likely be seeing a production of “The Revolutionists” this year, perhaps similar to the one directed by Denise Yvette Serna at Strawdog Theatre Company.

They might not all be witness to the deconstructive array of creative elements in the scenic and lighting design of Alex Casillas and Claire Chrzan, respectively, and they certainly won’t hear the innovative and engaging musical looping and audio manipulation of Spencer Meeks’ sound design. But they will all watch some iteration of Gunderson’s anachronistic, meta-theatrical French Revolution Thought Experiment, where playwright Olympe de Gouges (Kat McDonnell), abolitionist Marianne Angelle (Kamille Dawkins), assassin Charlotte Corday (Izis Mollinedo), and cake-loving monarch Marie Antoinette (Sarah Goeden) are thrown into a room to ponder that oh-so-simple question: What is a woman’s duty during times of revolution? Gunderson likely sees a lot of herself in de Gouges, an artist fretting over whether making art is an appropriate action in a time where the world is crumbling to pieces. It’s a question many of us artists ask ourselves daily.

You’ve likely already drawn parallels in your head to the current political hellscape we’ve devolved into. (There are enough lines scattered throughout this show to convince you that the play was written an hour ago.) This immediacy is passionately brought to life by the quartet of actors who fill the revolutionary roles. Kat McDonnell is literally fighting for her life. Her words and her sparring matches with Kamille Dawkins are worth the price of admission. Sarah Goeden succeeds in the unenviable task of exposing the humanity of a tyrannical ruler, and Izis Mollinedo has a great deal of fun with her stab-happy heroine.

Serna has crafted a production with a refreshingly bold aesthetic for a story set in the eighteenth century. The actors are adorned in stark, all-white costumes (designed by Leah Hummel), while microphones dangle from the ceiling which characters use to provide dramatic and comedic emphasis to the proceedings. Each of these design elements, on their own, show great artistic promise, though whether they work as a cohesive unit is a question worth unpacking.

It says a lot about how our patriarchal society kept a record of this period in history that Marie Antoinette emerged as the most well-known of this quartet. But with “The Revolutionists,” Gunderson has given de Gouges what she always wanted: an audience willing to listen and to hear that we are all created equal and must all be treated with respect, not just the cisgender white men of this world. Almost three-hundred years later, that idea is still somehow revolutionary. (Ben Kaye)