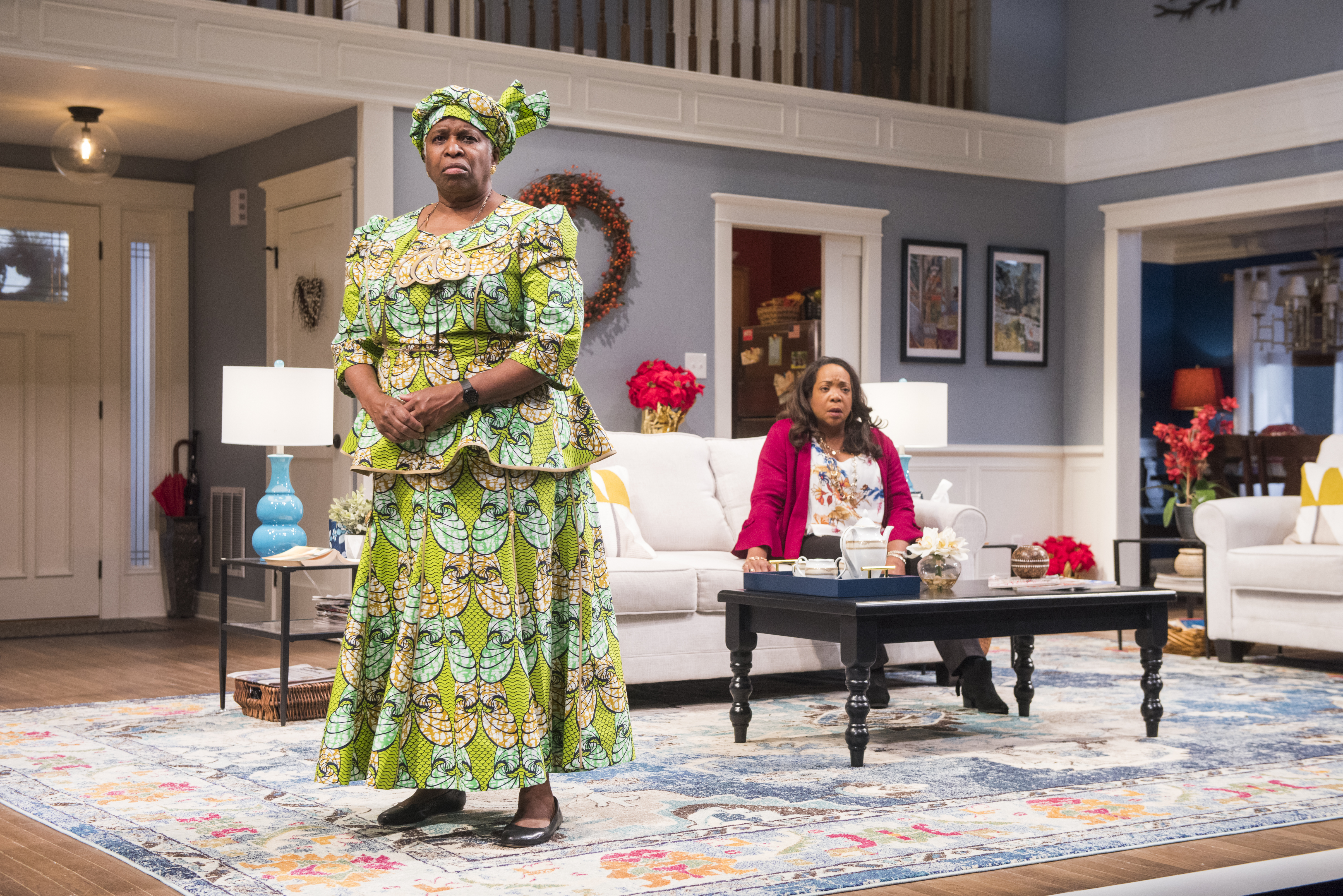 Danai Gurira’s “Familiar,” directed by Danya Taymor, begins as a familiar story: a pending wedding drives tension as bride-and-groom-to-be (Lanise Antoine Shelley, Erik Hellman) navigate the expectations and ideals of their family. How do they have the American wedding of their dreams, while making space for the Zimbabwean rituals cherished by some and dismissed, even denounced, by others? The exploration of role, identity and family loyalty permeates skillfully through each character’s arc, and the journey is resonant. Gurira’s Zimbabwean roots bring new and vibrant life to an old story, as she leans into each character’s cultural biases and discoveries.

To call the play a farce is a stretch. While Kristen Robinson’s set gives the actors ample doors to close on each other, and there are certainly moments of exaggerated physical comedy that deliver in spades, the desire to drive this piece into a farcical space at times overpowers its inherent heart and truth. It takes time for the piece to establish its tone, but as the story goes on and more life is breathed into these spectacular characters, Taymor’s direction of this indomitable cast takes the production to great depths.

“Familiar” exemplifies the kind of theater that major houses, as well as small houses, must prioritize. As the matriarchal trio, Ora Jones, Cheryl Lynn Bruce and Jacqueline Williams thrive, in what I imagine is a rare opportunity to play so closely with their peers on such a prominent stage as Steppenwolf. It is a rarity to see three black women over forty commanding such substantial roles in the same play, each in their power, elevating and challenging each others’ performances to great heights. Jones and Bruce are a match made in heaven, bringing palpable tension and wit to a contentious and heavily-weighted sisterhood.

Among the rest of the cast, there is also much to celebrate. Celeste Cooper, one of the newest additions to Steppenwolf’s ensemble, is a delight to watch, with an exceptional ear for comedy. Cooper excels in an especially endearing scene at the top of the second act, where she and the groom’s brother Brad (Luigi Sottile) bond over questions of family belonging.

As family secrets are revealed, Gurira takes a global conversation about the reconciliation of identity—how we give room to our past while forging our future—and makes it personal. With the great Ora Jones at the helm, in all her truth and mastery, Gurira asks us how we might open the doors to parts of ourselves we have long since closed and that we fear might leave us broken. The result is a profound, intergenerational healing. (Erin Shea Brady)