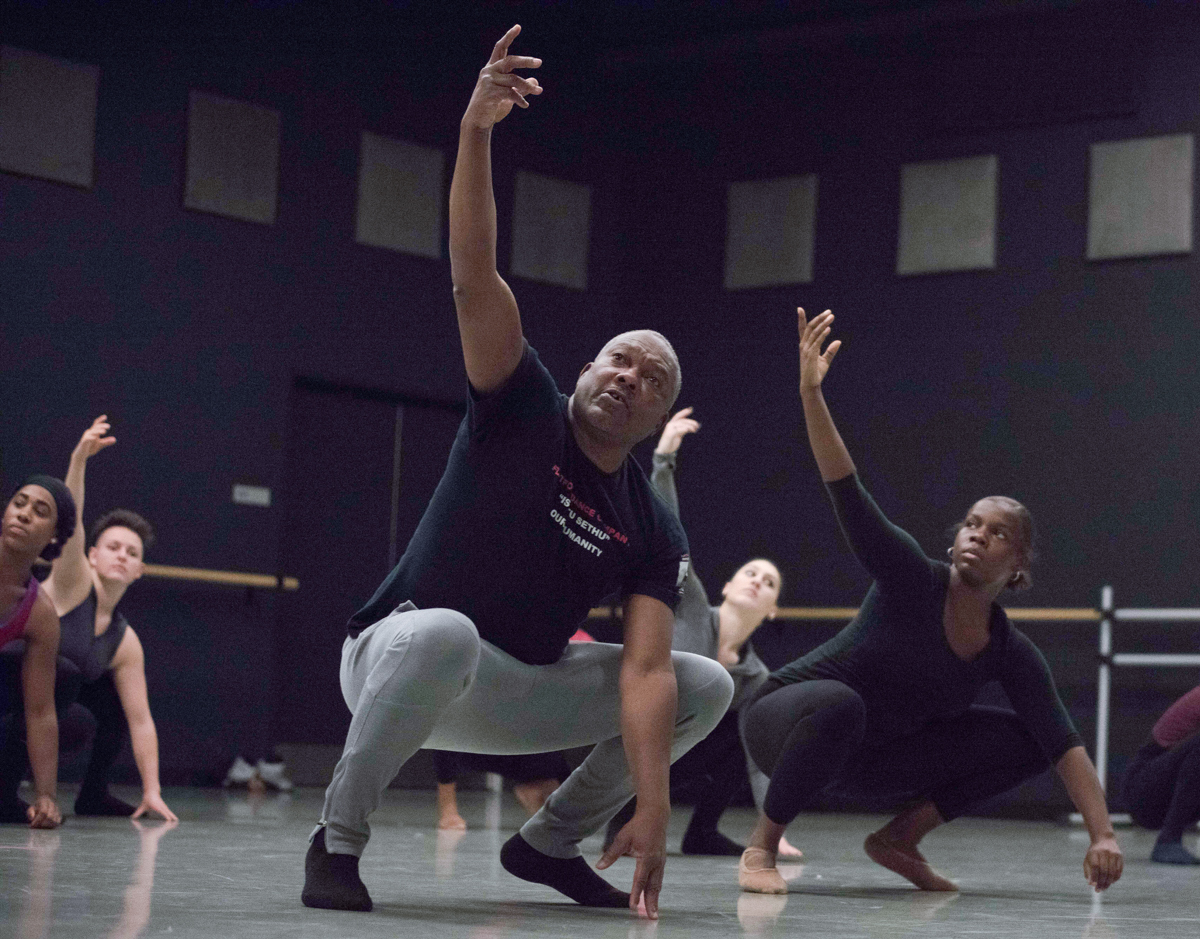 For more than twenty years, Kevin Iega Jeff and Gary Abbott, co-founders of Deeply Rooted Dance Theater, have made and presented dances that celebrate community and nourish the soul through a blend of modern, contemporary and African dance traditions. Deeply Rooted will perform early repertory pieces by Jeff and Abbott along with one new work by Abbott in December at the Logan Center for the Arts, in “An Inspired Past, A Jubilant Future.” Abbott spoke to us about his new piece, “Parallel Lives,” as well as his hunger to continue pushing himself, now in his sixties, as an artist.

Tell me the story behind “Parallel Lives.”

I grew up the only male in the house with eight women. I’m pretty caught up with what’s going on with y’all. I am fascinated with how strong women are. I grew up, not in poverty, but in a pretty poor family and noticed how women who were as poor as each other supported each other. In the highest of highs and the lowest of lows, they always were there for each other. Someone always had their backs, be it feeding their kids or taking care of each other when they were sick. I’ve been touched by so much conversation with the MeToo movement and the way women support one another.

Are there any particular stories that inspired the piece?

It’s such a broad amount of information from so many places. I’ve traveled a lot around the world and I’m fascinated by the plain, everyday people. I’ve always noticed how women have had different experiences and been able to help each other. For example, one of my best friend’s mother had cancer. She was trying to figure out how to deal with it with no money and no health insurance. What my friend’s friend did was take her into her home and cared for her until she died. She didn’t have to do that, but it was such a sisterhood and it was so important that she did this for her friend. And reading different articles about the women who supported the Civil Rights movement: these were mothers and grandmothers out to see humanity prevail. They were plain women who didn’t go to school for communication but they came out and spoke clearly and moved things forward. We don’t see the little women who are out feeding the people or cleaning things for those who get to step up to speak. These people have power. 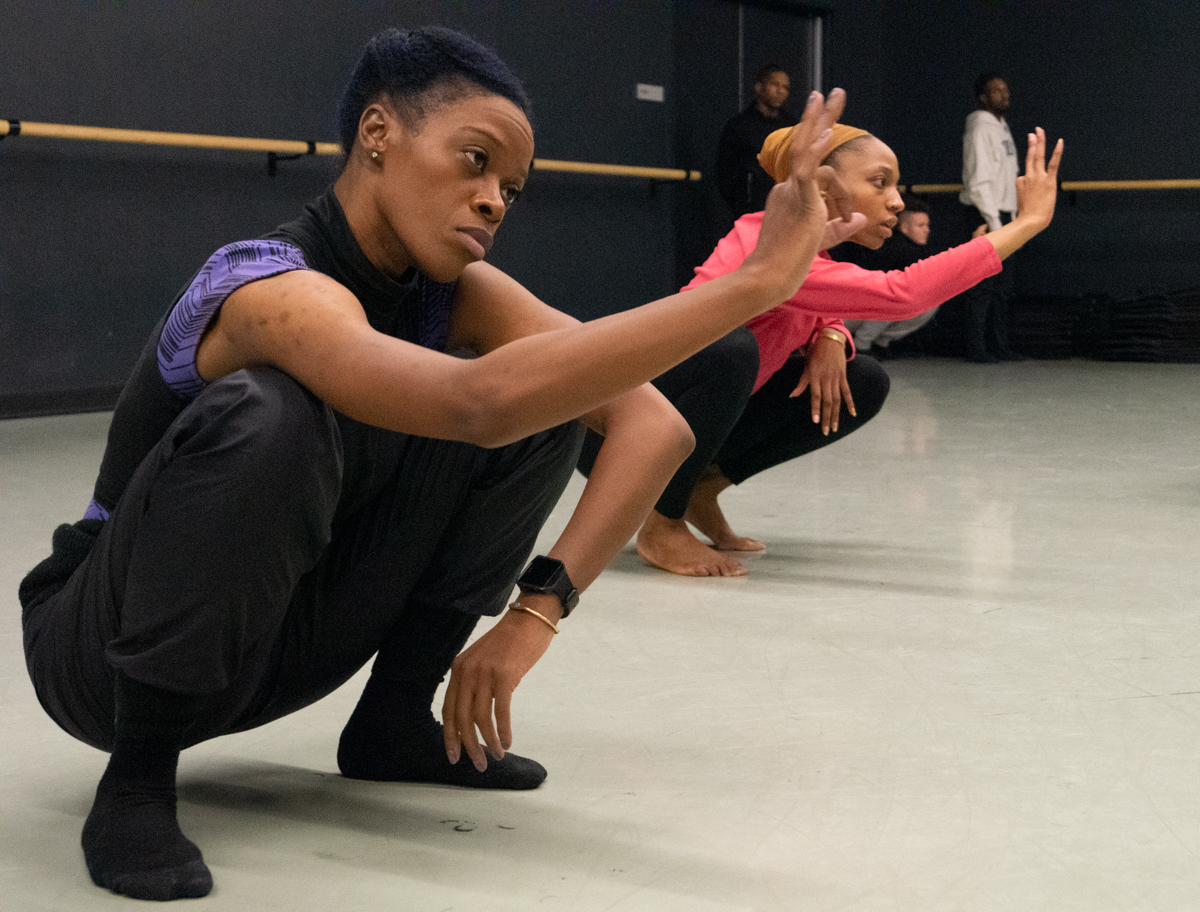 How did you take this subject and begin translating it into music?

I teach at the University of Missouri-Kansas City. The composer works there with me and started talking to me around the same time I started working on the piece. The music began to coalesce the ideas. I saw a village of women who looked out for each other and were skeptical of strangers. I started feeling a protection, a focus on protecting each other. From that the movement appeared: the characters of the women—older, younger, very poor with a great deal of dignity and pride—I took those ideas and started focusing in on the type of movement and how they would move.

I have a hard time talking about my process. I walk in the studio and think of things that I feel and I can start moving that way. Fortunately I have some incredibly smart students and dancers who are willing to let me experiment.

You said you know the composer from the university. Have you collaborated before?

No, this is our first collaboration. I know him because he accompanies ballet classes. He plays with a huge dramatic flair. His playing is so filled with passion and emotion. We started talking about his composing; he brought me his music and we started working it to fit the piece.

How do you feel this new piece sits alongside the other work in the program from twenty years ago?

I think what it does is it talks about where I am personally as a choreographer right now. It’s interesting because I’ve been really worried about staying curious about my creativity. That’s been on my mind lately: making sure I keep working on the tools and my voice as a choreographer. That was at front of mind as I was working on this, but I also tried to let it go and create and not worry if it was phrasing I’d done before. All choreographers have a phrase or two that they use again and again, so I let that go and let the feeling of the piece come out. It’s sort of where I am now. I don’t know if it portends the future more than my knowing that I want to keep creating and keep addressing issues that are important to me and to other people.

Why do you suppose you have this concern for your process and sense of curiosity right now?

I’ve been doing this for forty-five years. I’m sixty-two years old. My body has changed. The amount of physical work I can do has changed. I can still move pretty well for an old guy but my body doesn’t respond as well as it used to. I want to explore ways to move with more intelligence, and bring myself to task in creating and not fall back on what’s worked in the past. I’m going back to school to get my MFA in choreography. Isn’t that crazy? I’ve always had a curiosity about how to improve the tools I have as a choreographer, but I feel as though there’s information inside of me—my heart, soul, head—that needs to be stimulated and I think pursing this MFA will help unlock some of it. And help me connect my interior dots and articulate it better. I’m hoping it will do that. I don’t want to do more choreography, I want to do choreography that means more to me.

I think my skills are better and I’m hoping the choreography is better, but I don’t know that it means that much to me. What’s important is that I get the message out to people and I hope the choreography touches people.

I think Deeply Rooted is something… I wish I had a better word than special. I think it’s growing and evolving and finding its way into, I’m hoping, a space where more people can see us and experience what we have to offer. I’m so damn proud of everything we do because I know why we do it. And I’m not saying we’re better than any other company because I’m not a part of any other company. I can say that what we’re doing is earnest and thoughtful. I hope we continue to inspire people.