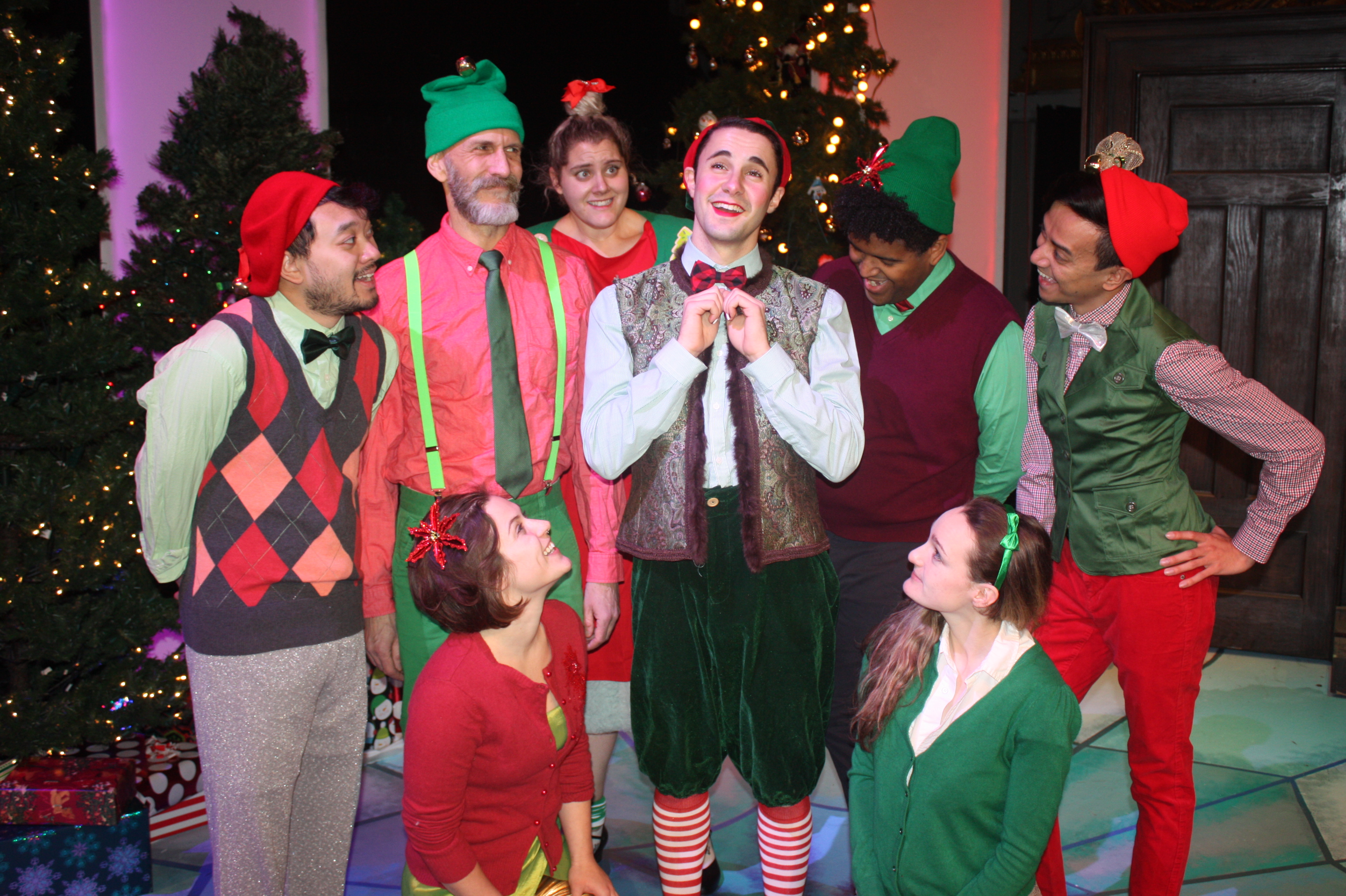 Roy Samra (center) and the cast of “Barney the Elf”/Photo: David Zak

Arts organizations present a cornucopia of theatrical delights to tickle our fancies and warm our hearts every holiday season. One person may value the vaulted ornamentation of Handel’s “The Messiah” while another may only be sated by the calculated writhing of a celebrated sugarplum fairy. Blessedly, there’s something for everyone.

For those who like a little sketch-comedy irreverence, replete with outsized character, sociopolitical innuendo and blue lyrics slathered onto pop songs (and maybe just a little bit ‘o tear-in-the-eye), the fourth annual production of “Barney The Elf” is the very thing. Bryan Renaud and Emily Schmidt’s musical, inspired by the movie “Elf,” played the Greenhouse Theater Center for the past three holiday seasons. Pride Films and Plays’ new production is directed by Michael D. Graham, with several performers appearing in roles they essayed in the past.

Up at the North Pole, Santa is no more, and Santa, Jr. has been left in charge. Lovely and wise Mrs. Claus would have been a better choice, or the Christmas-loving Barney the Elf, who keeps up everyone’s spirits with relentless good cheer. Santa Jr. cares only to Make Christmas Great Again by redirecting the elves’ good energy into higher productivity. Barney gets outed by his own boner when he meets a sexy delivery man, and homo-hating Santa, Jr. banishes Barney. Barney ends up as a janitor in a gay bar in Chicago, where he is befriended by the drag queen Zooey. Zooey helps Barney find self-acceptance. But wait! What’s this? Santa. Jr. can’t keep the sleigh airborne and it’s Christmas Eve? Who will save Christmas?

Roy Samra dances center as the elf of the title for the third time. With molars gleaming and high notes aplenty, Samra deftly toes the line between caricature and real boy so we can chortle one minute and despair with him the next. Dixie Lynn Cartwright’s Zooey is pitch-perfect. Cartwright, a popular hostess/personality in Chicago’s gay scene, is the drag-character creation of Drew Nixon. Cartwright knows how to break the fourth wall without causing the building to come tumbling down. In this genre, that is the best Christmas gift of all. (Aaron Hunt)