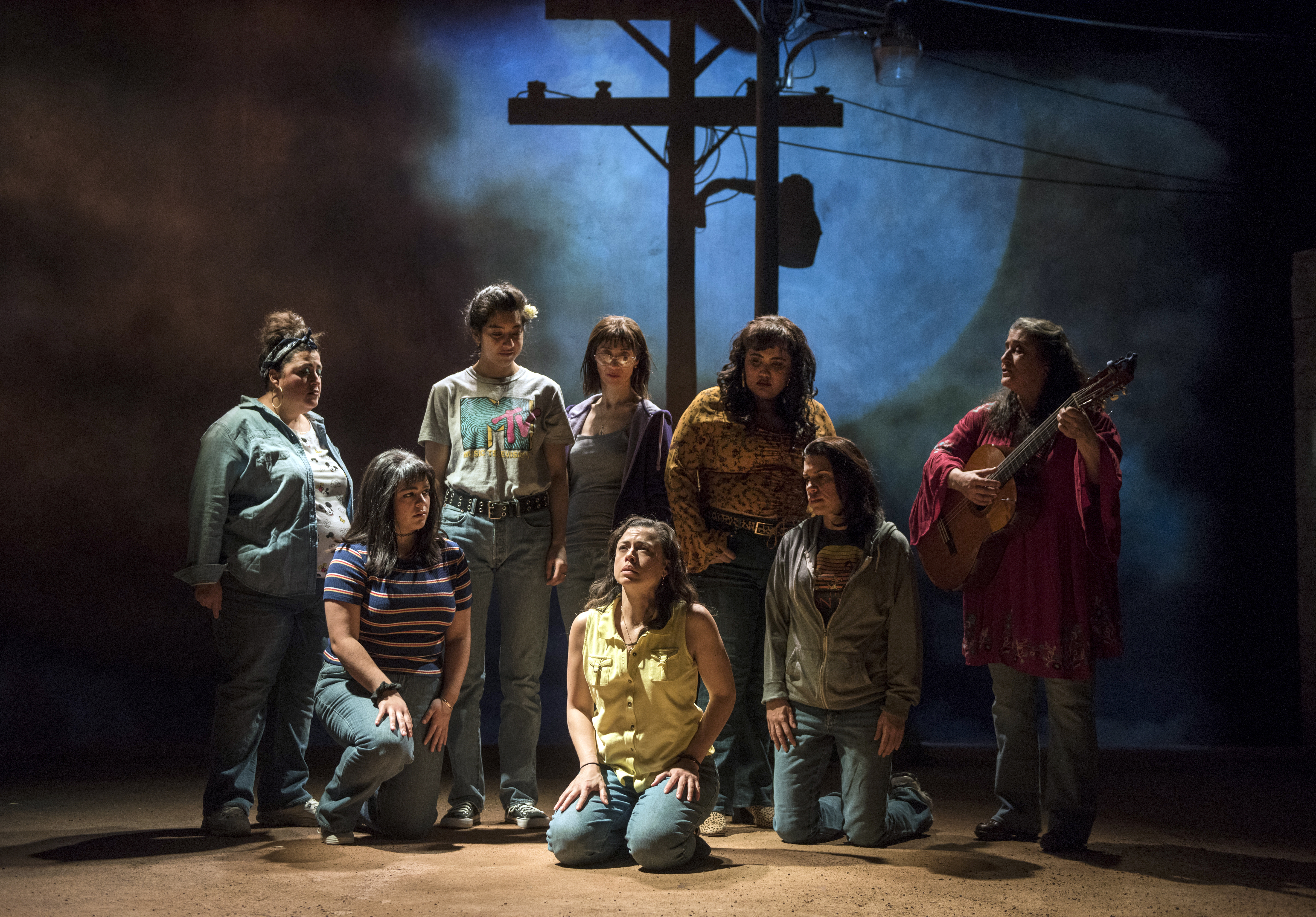 The first thing you’ll notice are the pink crosses. They’re scattered at the downstage right corner of the Upstairs Theatre at Steppenwolf, where Isaac Gomez’s “La Ruta” is having its world-premiere production. The crosses mark the missing women of Ciudad Juárez, the town in Chihuahua, Mexico, where Gomez’s story takes place. Many names adorn the crosses: Maria, Claudia, Olga, Esmerelda. But most of them bear the marker Desconocida, Spanish for “unknown.”

Memory is all we have, and storytelling plays a huge part in keeping the memories of our loved ones alive for generations long after we’re gone. With “La Ruta,” a play inspired by the true stories of the women of Juárez (with names altered to protect their identities), Gomez has crafted an act of storytelling whose primary function is as noble as any act of pure human inspiration one can find in the theater: keeping these women and their daughters alive.

“La Ruta” focuses on Yolanda (Sandra Delgado, a force to reckon with) and her sixteen-year-old daughter, Brenda (Cher Álvarez, playing her character’s innocence to a tee). Brenda’s disappearance after a late-night shift is the inciting incident, with the rest of the play a kaleidoscopic journey jumping from weeks and days before the disappearance, to years after the life-altering event. It is implied that her disappearance is linked to an endless cycle of sex trafficking and trading in Juárez, a horrifically common occurrence. But for those looking for straightforward answers about what happened to Brenda and who kidnapped her, there are thousands of mothers in Juárez who’d like those answers too.

It is no accident that Yolanda and Brenda share virtually no scenes onstage, creating an even larger barrier between the two, with Brenda sharing most of her scenes with her new friend from work, Ivonne, brought to fiery life by Karen Rodriguez. Ivonne’s motivations and attitudes toward various characters through the course of the play shift on a dime, some with explanation bound into the fabric of the scene, some without. Several scenes of confrontation between Yolanda and Ivonne feel like pulling the same tooth over and over again in moments that could be reshaped and clarified.

But even those small structural critiques fall by the wayside when placed beside countless moments of sheer theatrical beauty, brought to life under the seamless, passionate direction of Sandra Marquez. A young girl alone, watching fireworks burst around her. A chorus of women singing to the heavens in a desert graveyard. A final image so powerful and daring in its staging that I wouldn’t dare spoil it. But it will stick with you long afterward.

At a time when our own government is on the brink of shutting down because of arguments over a pointless southern border wall, “La Ruta” represents a lot of things: a powerful step forward for Steppenwolf as an artistic organization, producing a world-premiere script with an all-female Latinx cast. It’s a ninety-five minute argument in favor of theater critics waiting until January to write their “Best Of” lists. But most importantly, it is a promise kept by Isaac Gomez to keep the true stories of the women of Juárez alive, and to make these women known to as wide an audience as possible. (Ben Kaye)