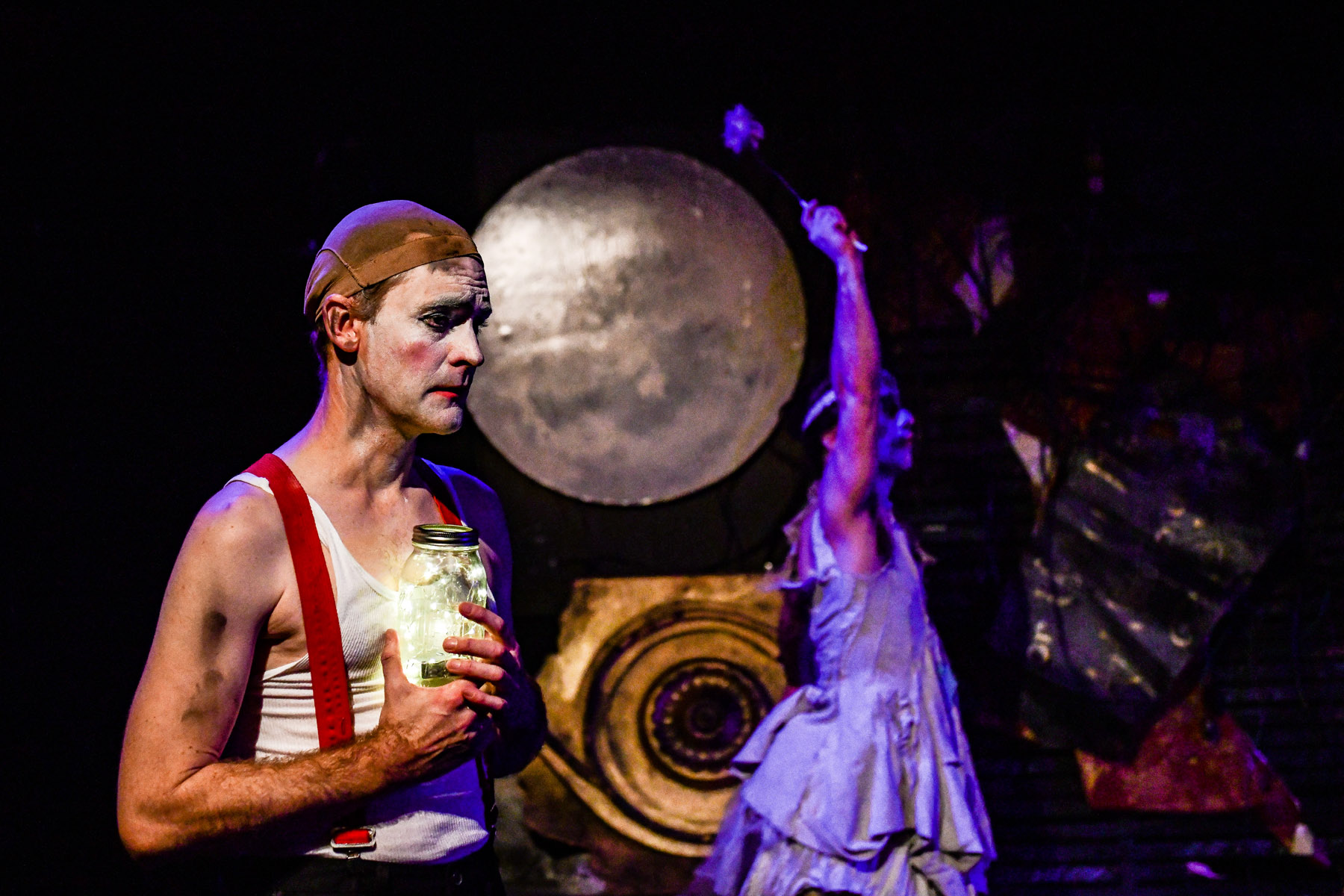 It happens the same way every year. Eddie Foy, Chicago’s favorite clown of the early twentieth century, brought to devastating life once again by Ryan Walters, peers at his fellow performers waiting in the wings. His eyes fill with desperation and his throat catches on the words he is about to utter:

“I don’t want to tell this story.”

And just like that, I am brought to tears. Just like the year before. Because Eddie Foy must tell this story. And we must listen, in what has developed into the Chicago theater tradition that is “Burning Bluebeard,” a Christmas pantomime penned by Jay Torrence and directed by Halena Kays. Playing at the Neo-Futurarium, where the piece originated, for an extremely limited run—best get on that waitlist while you can—“Bluebeard” remains as anarchic, hilarious, and deeply terrifying as ever. It is also, arguably, the best gateway show to bring non-theatergoers to the world of what storefront theater in Chicago can be: absurd, collaborative and deeply, deeply insightful.

The play is based on, and inspired by, the true story of the Iroquois Theatre Fire on December 30, 1903. Through the eyes of five performers and one stage manager (Torrence himself), we are told the story of “Mr. Bluebeard,” the pantomime performed at the Iroquois that fateful day, and the gruesome moment-by-moment replay of the fire that consumed 602 audience members. A slow-motion ballet sequence set to the meticulous detail of the story of the fire is a devastating highlight of the show.

Despite the grim events that led us here, “Burning Bluebeard” is filled to the brim with irreverent humor, riveting dance sequences and enough charm to fill a bucket full of magic cotton balls. Torrence’s play, ultimately, explores what stories mean to us, and, even more, what stories mean to those of us who tell stories. What is the price we tell ourselves we must pay for the perfect story? That perfect moment of moonlight? At what cost must this all come? Isn’t there another way we can find our happy ending? Does life even have happy endings, or must those be left for the illusory stage?

For repeat viewers who may not be interested in returning, I will say you have yet to see the delightful antics of the three newest cast members of this year’s vaudevillian roustabouts: Kaitlyn Andrews, bringing spunk and spirit to the role of aerialist Nellie Reed; Dave Honigman, a sympathetic and witless Henry Gilfoil; and Crosby Sandoval, whose take on the Faerie Queen brings a whole new level of acrobatic tomfoolery. These three fit perfectly with Walters, Torrence and the sly, chaotic Pamela Chermansky. They provide us with a small glimmer of hope for the future of this piece: that even with new players at the helm, “Burning Bluebeard” will bring joy and tears for many years to come. (Ben Kaye)