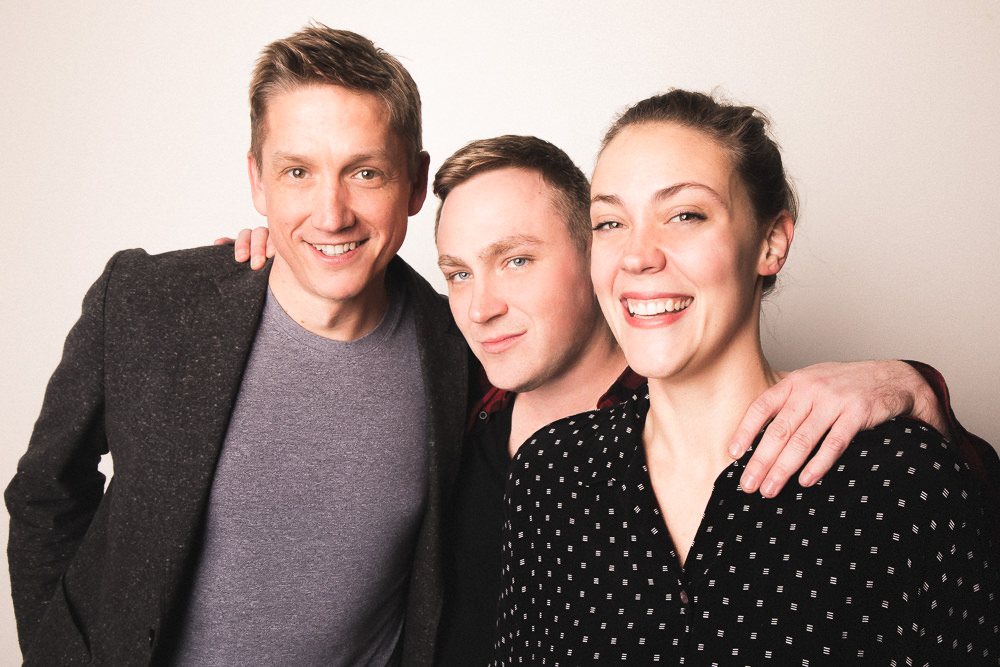 40
Max Truax, Deirdre Connelly and Casey Chapman
Artistic Director, Managing Director and Marketing Director, Red Tape Theatre
Joining the ranks of Free Street, Theatre Y and the recently-shuttered Oracle Theatre, Red Tape Theatre announced that beginning in 2018 they would join the Free Theatre Movement in an effort to make their art accessible to all. And while plays by Howard Barker and Bertolt Brecht may have been tougher sells for expanding the company’s audience, they found unprecedented success in Young Jean Lee’s “The Shipment,” a play about African-American tropes and stereotypes in media and entertainment, directed by Wardell Julius Clark with associate director Sydney Charles. The company has taken this success quickly to heart. Their next production, free to all, will be “In The Blood” written by Pulitzer Prize-winner Suzan-Lori Parks and directed by Chika Ike. 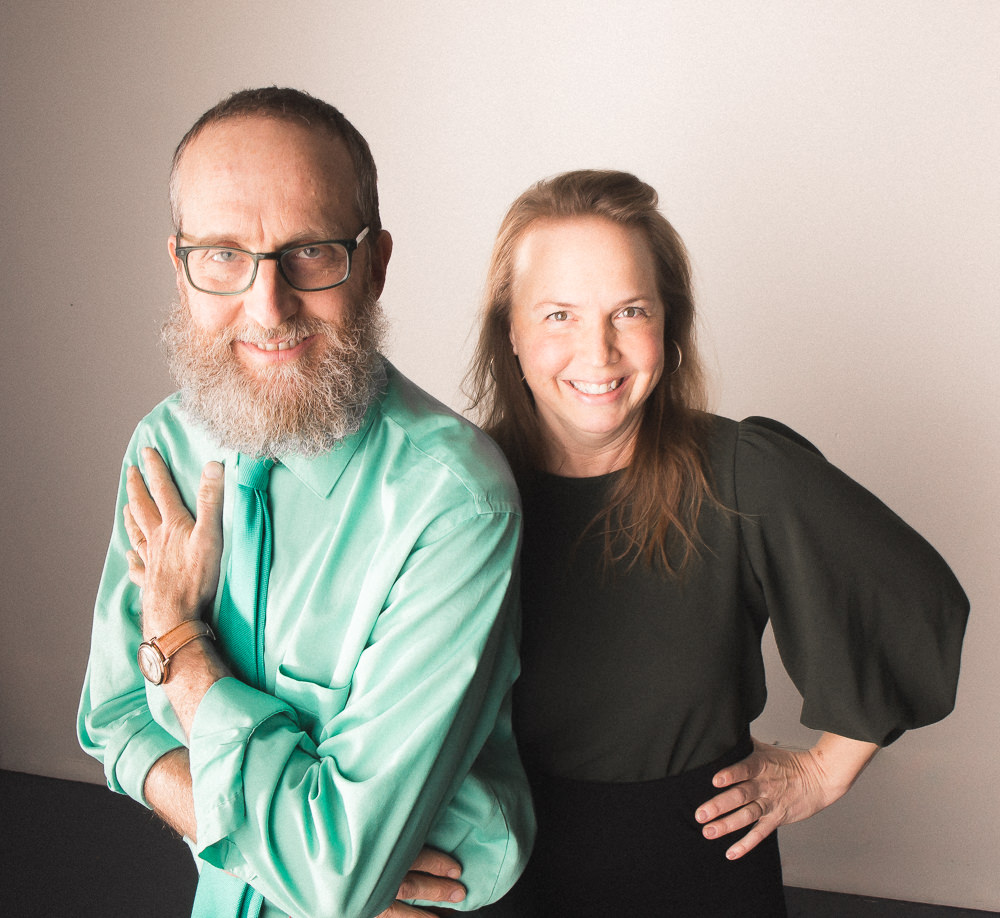 39
Blair Thomas and Sandy Gerding
Artistic Director and Managing Director, Chicago International Puppet Theater Festival
Anyone who has seen Blair Thomas’ imagination manifested, in the context of Redmoon Theater, of which he was a co-founder, or his eponymous puppet theater company—for example his fantastic, utterly transporting all-puppetry rendition of “Moby Dick” at the MCA—can attest to the uncanny emotional power of an object animated by a master’s hand. Two years ago Thomas, with support from Gerding, made a move to establish Chicago as a mecca for the art of puppetry with the inaugural Chicago International Puppet Theater Festival, a twelve-day event series that drew companies from around the globe. The festival continues to grow, and the 2019 lineup includes productions by master puppeteers from Japan, Israel, Chile, all parts of Europe and the United States, held at the Art Institute, the Neo-Futurarium, Links Hall, the Studebaker Theater, the Logan Center, the Chicago Shakespeare Theater and the Beverly Arts Center.

38
Bert Haas
Executive Vice President, Zanies Comedy Clubs
The longest-running standup comedy club in Chicago, and the fourth longest-running in the country, Zanies just celebrated its fortieth anniversary. Executive vice president Bert Haas has been a part of the company for nearly as long, beginning his tenure in 1980. And while Haas started as a waiter, he didn’t sling drinks for long. He quickly moved into management, started booking talent in 1982 and has never looked back. To celebrate their anniversary, the club, like a comedic St. Nicholas, delivered forty comics to its storied stage in a single night. It’s a gimmick Zanies has used before (thirty comics for its thirtieth anniversary, thirty-five for its thirty-fifth), but the comics who got a chance to deliver their truncated routines didn’t seem to mind. After two hours the stage was cleared, the tables bussed and the staff, Haas included, headed home. For this Chicago institution, which books comedians seven nights a week, there would be more laughs every day to come.

37
Julieanne Ehre
Founder and Director, Pivot Arts
Julieanne Ehre has a lot to be proud of, as the multidisciplinary organization she founded six years ago has established a strong foothold in Chicago’s performance scene. The recipe for success: promoting innovative new work in cooperation with established venues and presenters— from Chicago Filmmakers to the Goodman Theatre. Pivot’s annual weeklong summer festival is now a staple on the arts calendar, presenting live theater, dance, film and music at venues across the North Side. And the organization doesn’t keep still in between. Most recently, Ehre collaborated with Peter Taub, former programmer for the MCA Stage, curating a site-specific dance performance series, and teamed up with Defibrillator and SITE/less on the Video Corpo Dance on Film Festival. On top of that, Pivot partners with Loyola University on an incubator program geared toward work that blurs boundaries between creative disciplines. 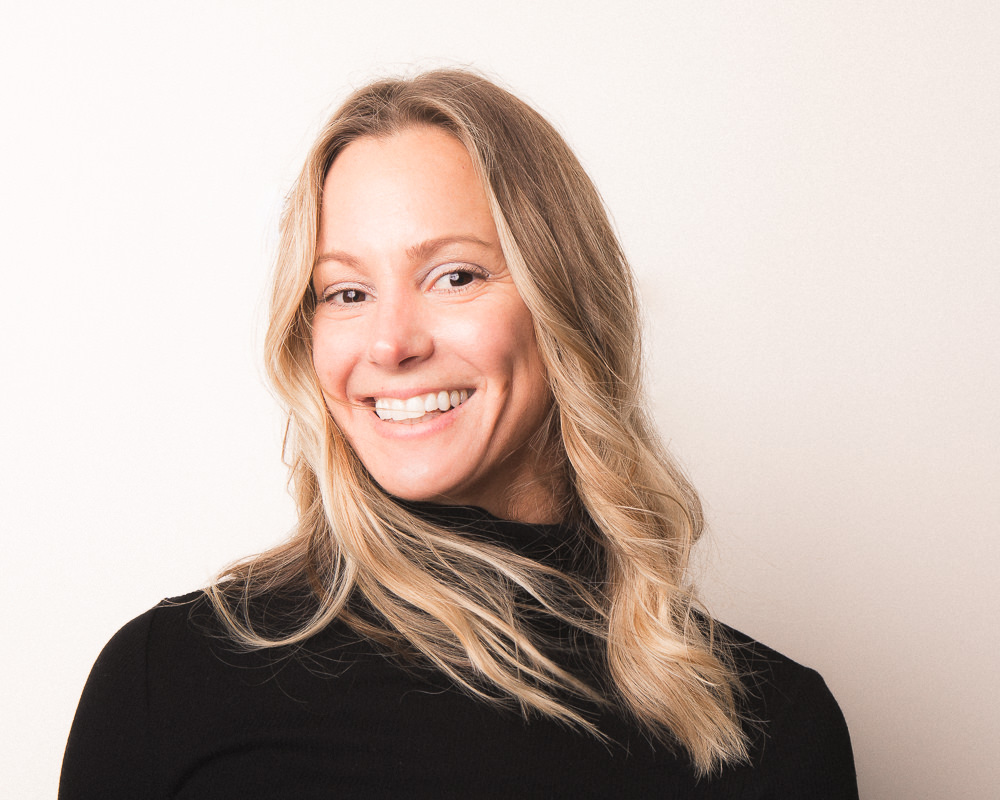 36
Lori Berko
Deputy Director, University of Chicago’s Arts + Public Life Initiative
Seeking to redress the geographical imbalance of arts spaces in the city and capitalize on the rich entertainment history of Washington Park, the University of Chicago’s Arts + Public Life (APL) initiative unveiled its capstone project: the Green Line Performing Arts Center. Completing the Arts Block, a collection of cultural and commercial spaces running along East Garfield Boulevard between South Prairie Avenue and South Martin Luther King Drive, the Green Line Performing Arts Center is tucked, cozy and compact yet readily accessible, underneath the Garfield Park Green Line stop. The 6,600-square-foot space includes the E&A Theatre, a black-box venue with seating for more than eighty; the Harris Studio, a rehearsal and performance space; and a lobby and outdoor courtyard for public programs and exhibitions. With the Green Line, APL will nurture existing community relationships while expanding opportunities for aspiring and established theater artists through education and training programs, tech and front-of-house career opportunities and an expanded artist residency program. In its inaugural season, the theater will host The GreenLight series, a rotating sample of storytelling, music performances, comedy, theater and dance works. 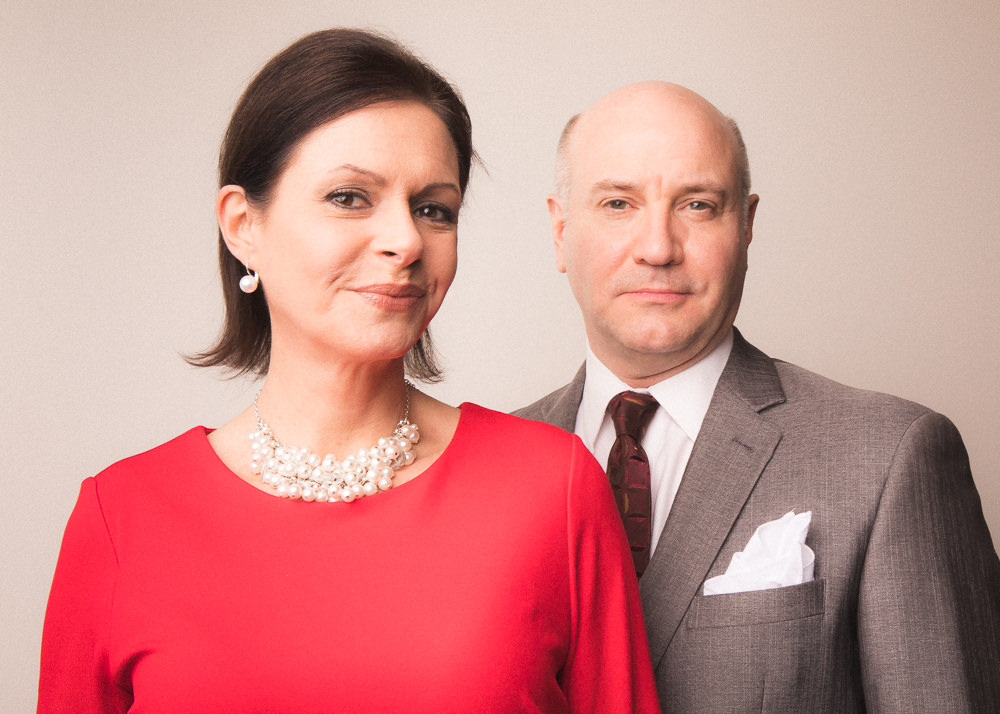 35
Michael Weber and Jeannie Lukow
Artistic Director and Executive Director, Porchlight Music Theatre
In the world of so-called “straight” theater in Chicago, it’s possible to take for granted the word “premiere,” given the frequency it’s attached to words like “world,” “regional” or “local,” so much so that some are more likely to notice its absence than its presence. The same cannot always be said for musical theater, where mega-hits of the past rear their heads almost every season. Porchlight Music Theatre, though, has averaged a premiere a year since its inception 1995. And non-premieres are selected for their potency. The runaway hit of the 2016/17 season, Quiara Alegría Hudes and Lin-Manuel Miranda’s “In the Heights,” ran for seventy-eight performances and was extended four times. The show’s success, auspiciously timed to “Hamilton”’s arrival in Chicago, allowed the company to move to a new, permanent home at the Ruth Page Center for the Arts. Since the move, the hits have kept coming: from the contemporary, ripped-from-the-headlines workmanship of “Billy Elliot” to the singular, show-stopping performance by E. Faye Butler in “Gypsy.” And while the remainder of the 2018/19 season may not have the hook of a premiere, what it does have is sure to pique audience interest: “A Gentleman’s Guide to Love and Murder,” “A Chorus Line” and an enticing line of auxiliary programming in the guise of the Porchlight Revisits and New Faces Sing Broadway series. 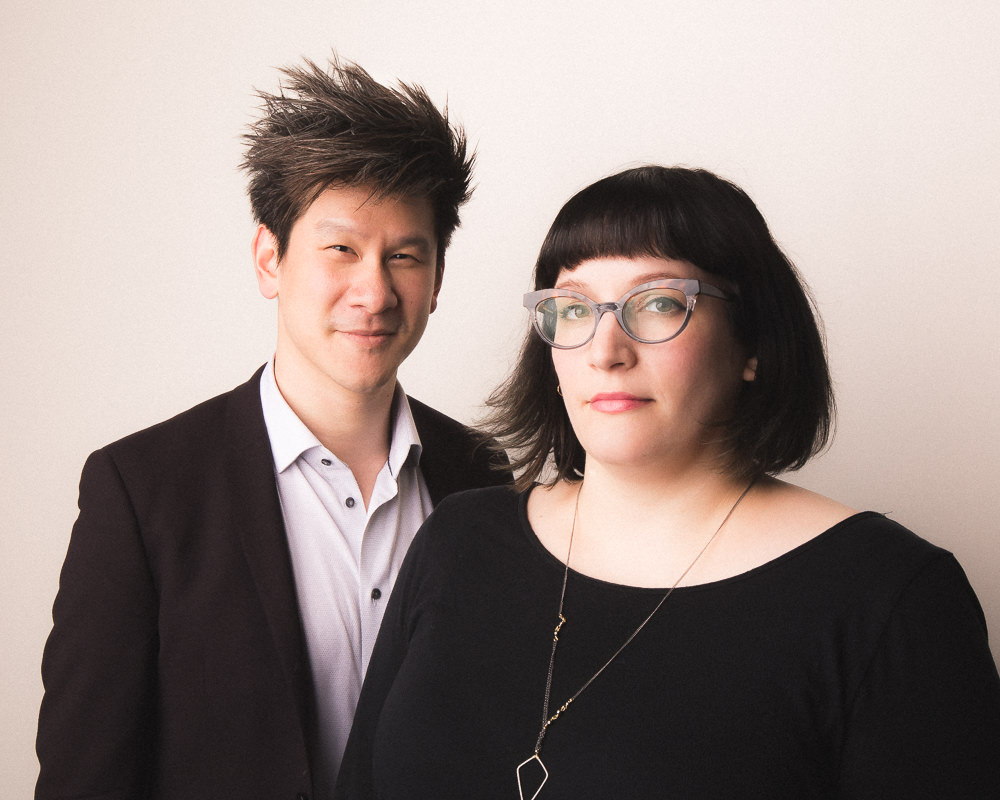 34
Billie Howard, Steven Wang and Barbara Egel
Artistic Director, Executive Director and Development & Marketing Coordinator, High Concept Labs
High Concept Labs turns ten this year and the organization that started as a humble, warehouse studio space has quietly blossomed into a full-fledged arts organization that sponsors over a dozen artists each year in four-month and year-long residency programs. Last year’s grantees produced puppetry, classical theater transformed into multimedia extravaganzas, modern dance with motion capture, and sound compositions inspired by the experiences of sight-impaired people—and these artists were selected in partnership with 3Arts, an organization dedicated to the advancement of female artists, artists of color and artists with disabilities. High Concept Labs held more than fifty events last year in venues as large as Mana Contemporary in Pilsen and as small as Logan Square’s Comfort Station. With Howard as High Concept Labs’ first artistic director and Egel joining the team in their new offices in the Harris Theater, the organization is only picking up momentum. It’s great news for emerging Chicago artists making work that doesn’t fit neatly into any one box. 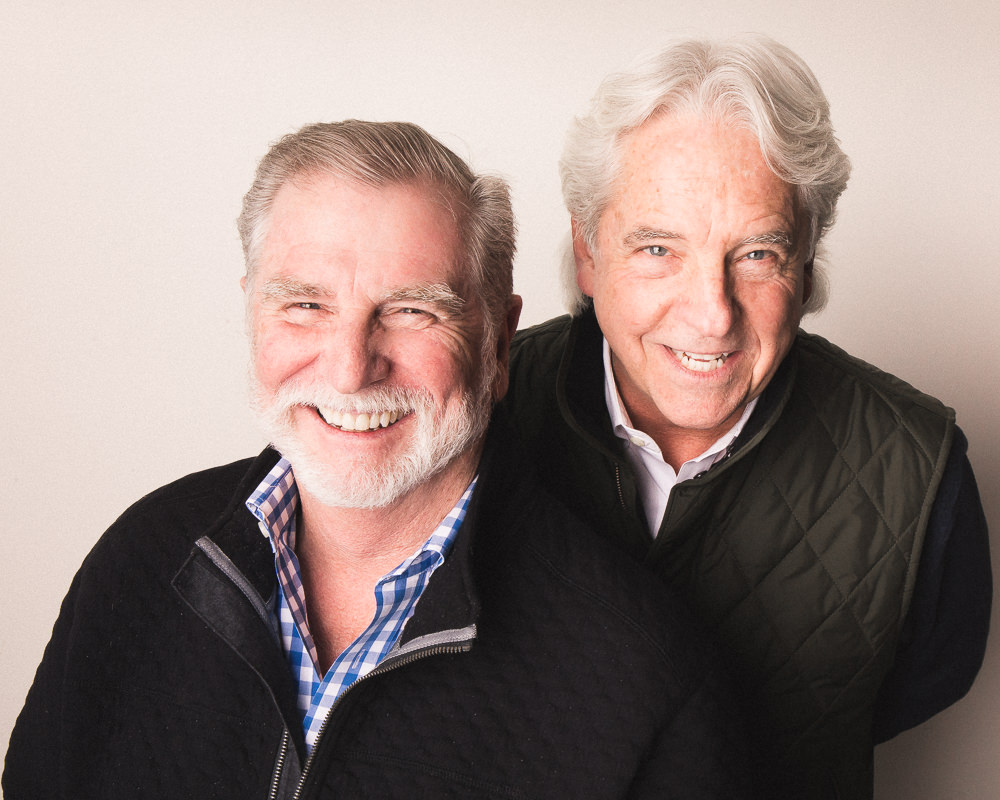 33
BJ Jones and Timothy J. Evans
Artistic Director and Executive Director, Northlight Theatre
Northlight Theatre ranks as one of the premiere destinations for theater in the Midwest, deftly transporting that defining Chicago belief in new work to Skokie. And while the carless among us may be out of luck, the company thoughtfully navigates other accessibility concerns through education programs that serve thousands of students from the greater Chicago area as well as a new initiative known as Arts for Everyone that aims to provide free tickets to each of the company’s productions. Regardless of your income and location, Northlight endeavors to make everyone’s experience worthwhile with quality productions of new and exciting works by some of the country’s most accomplished and exciting playwrights featuring many of the city’s finest artists. Case in point: the upcoming productions of “Nina Simone: Four Women” and the world premiere of “Landladies” by Sharyn Rothstein. Understanding that building a sustainable artistic future requires cooperation, the company recently made director Mikael Burke their first ever artistic fellow, a position that contributes to the casting and season selection process. 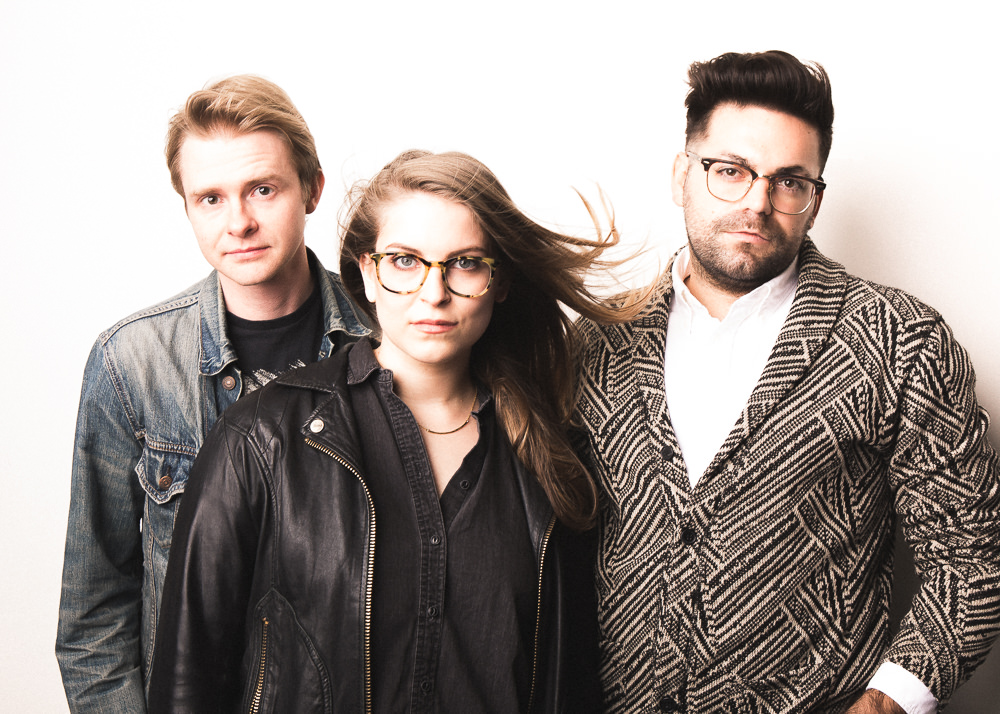 32
Hutch Pimentel, Amanda Fink and Andrew Cutler
Artistic Director, Managing Director and Associate Artistic Director, First Floor Theater
First Floor Theater made a name for itself among young storefronts with daring theatrical aesthetics and meme-friendly marketing tactics (their social media game is supremely on point). Add a stellar lineup to that, year-after-year, of some of the most promising and acclaimed young playwrights in the country including Jiehae Park, Leah Nanako Winkler, Nathan Alan Davis, Lucas Baisch and Tearrance Arvelle Chisholm, whose play “Hooded, Or Being Black for Dummies” made a splash last fall. Coming up in 2019: the world premiere of Dan Giles’ politically charged romantic travesty “Mike Pence Sex Dream” followed by the Chicago premiere of Halley Feiffer’s complex familial drama “I’m Gonna Pray For You So Hard.” 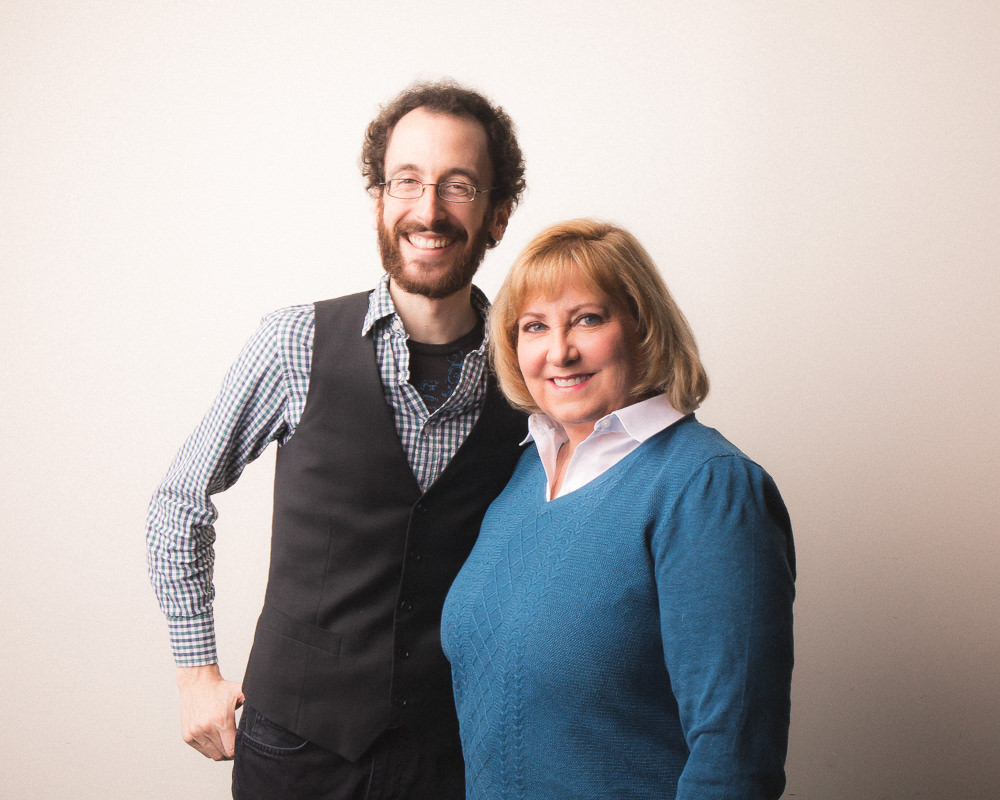 31
Josh Sobel and Carol Cohen
Artistic Director and Executive Director, Haven Theatre
Who would have guessed that one of the biggest hits of the 2016/2017 season would have been a musical about death and dying? Josh Sobel and Carol Cohen did. Written by Young Jean Lee, directed by Sobel, led by rising star Isa Arciniegas and backed by a multihyphenate band, “We’re Gonna Die” charged through its initial run at the Bookspan Theatre at The Den, the company’s home space since 2016, and was remounted in Steppenwolf’s Lookout Series. Since then, Sobel has switched gears to “Fear and Misery in the Third Reich,” a timely primer on the mechanisms of fascism and a reminder of Brecht’s talents and perceptions. That show was followed by the slightly more fantastic but no less horrifying world premiere of Isaac Gomez’s “The Displaced,” part of a mini-movement of horror narratives that swept through the city in the sweltering months of summer. The young company also fosters emerging talent through its Directors Haven initiative, an annual showcase of early-career local directors. And with upcoming local premieres helmed by Lili-Anne Brown and Monty Cole, the company stays effortlessly ahead of the curve.