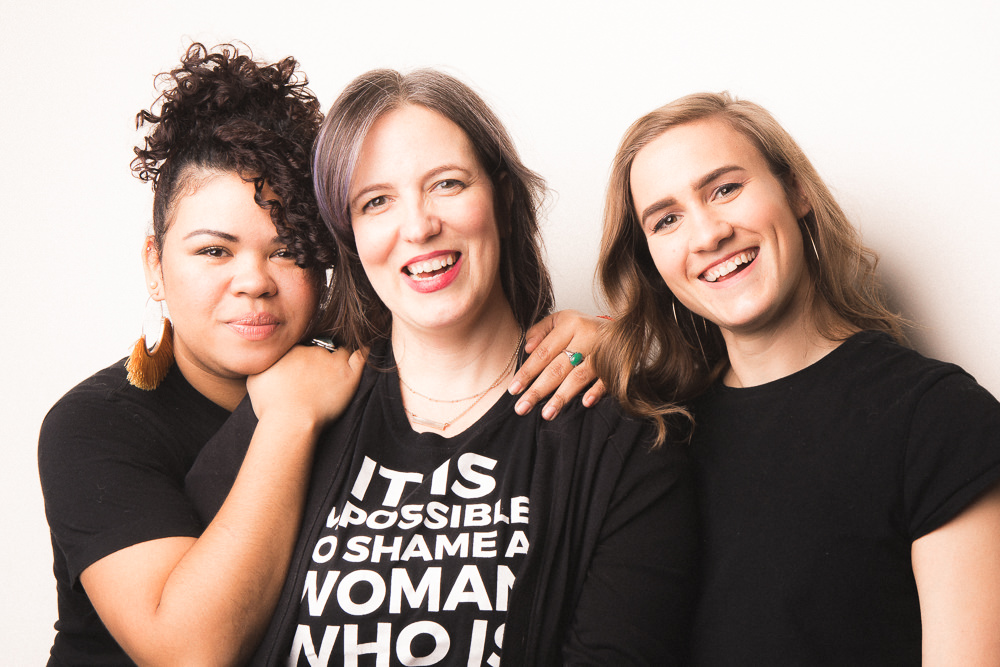 10
Coya Paz, Melissa DuPrey and Katrina Dion
Artistic Director, Director of Production & Community Relations and Director of Youth Programs & Development, Free Street Theater
It was in 1969, after the West Side uprising and the Democratic National Convention police riot, that the city of Chicago gave a giant truck, converted into a mobile stage, to a young and idealistic performance group. Thus was born Free Street Theater, under the direction of a Goodman School of Drama alumnus with the revolutionary name of Patrick Henry. “It was a pretty radical impulse back then,” says artistic director Coya Paz, who chairs the theatre studies department at DePaul University, and who shares FST leadership responsibilities with Melissa DuPrey and Katrina Dion. “We know that free out-of-doors theater won’t fix Chicago’s structural problems. But it does create an opportunity for people to come together and uplift each other.” As FST celebrates its half-century, making it one of the city’s longest-running companies, it continues to serve the twin goals of joy and justice. The multi-generational-racial-lingual troupe, which performs mainly at city parks, is developing “50 in 50,” a self-described “theatrical flash mob” that will put on fifty plays in each of Chicago’s fifty wards. “Still/Here,” a manifesto of neighborhood survival, will open this summer. The play’s title applies as well to this purpose-driven, community-based company, which continues, year after year, to provide relevant, pay-what-you-can theater to underserved audiences. 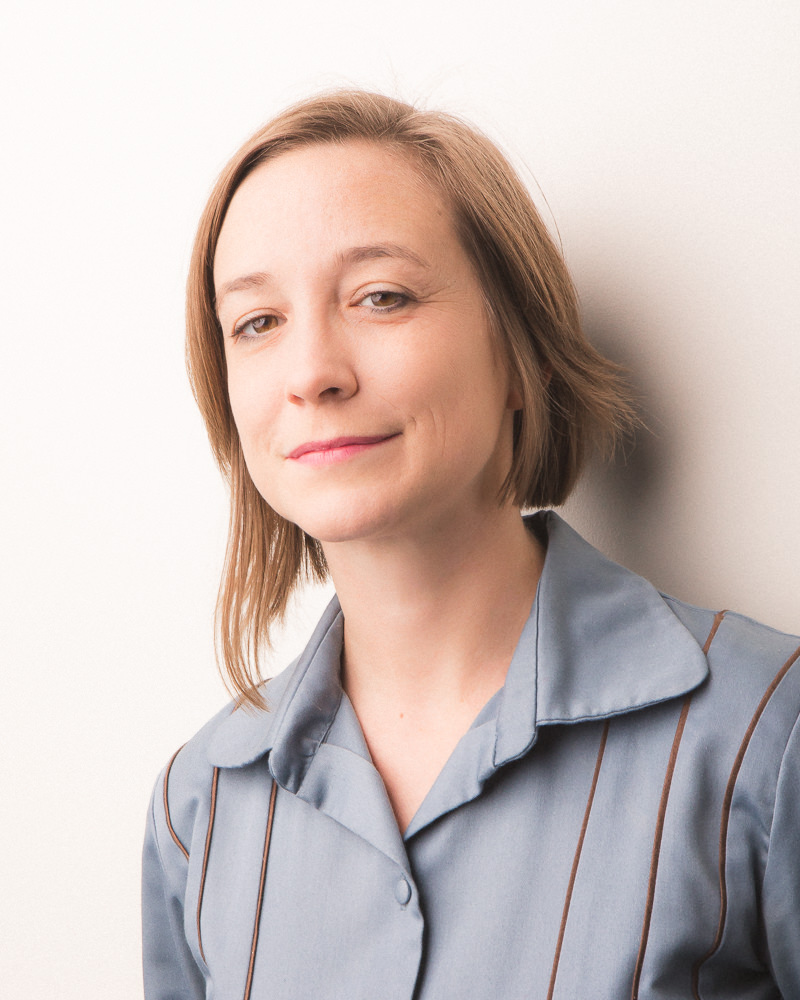 9
Ellen Chenoweth
Series Director and Curator, Dance Center of Columbia College
About a year ago, Ellen Chenoweth took over what she describes, with self-acknowledged bias, as the best place to see dance in the country. She may be biased, but may also be right. The black-box theater on South Michigan Avenue has no parallel: you’re never more than ten rows from the action, which takes the form of top-shelf performances of all genres, provided by internationally renowned troupes, homegrown companies and everything in between. Tickets are never more than thirty bucks, there’s no bar and the lobby is little more than a hallway. Nothing to do here but focus on great dance and, after opening-night shows, talkbacks with the artists. Chenoweth deepened the dance discourse this year with On The Ground, an invitation to writers to follow the season and post their reflections on the Dance Center blog. The 2018/19 season has been a curatorial collaboration between Chenoweth and her predecessor Bonnie Brooks. Next season Chenoweth takes the reins in full. Her intent: dig deeper locally, spread the net wider internationally. 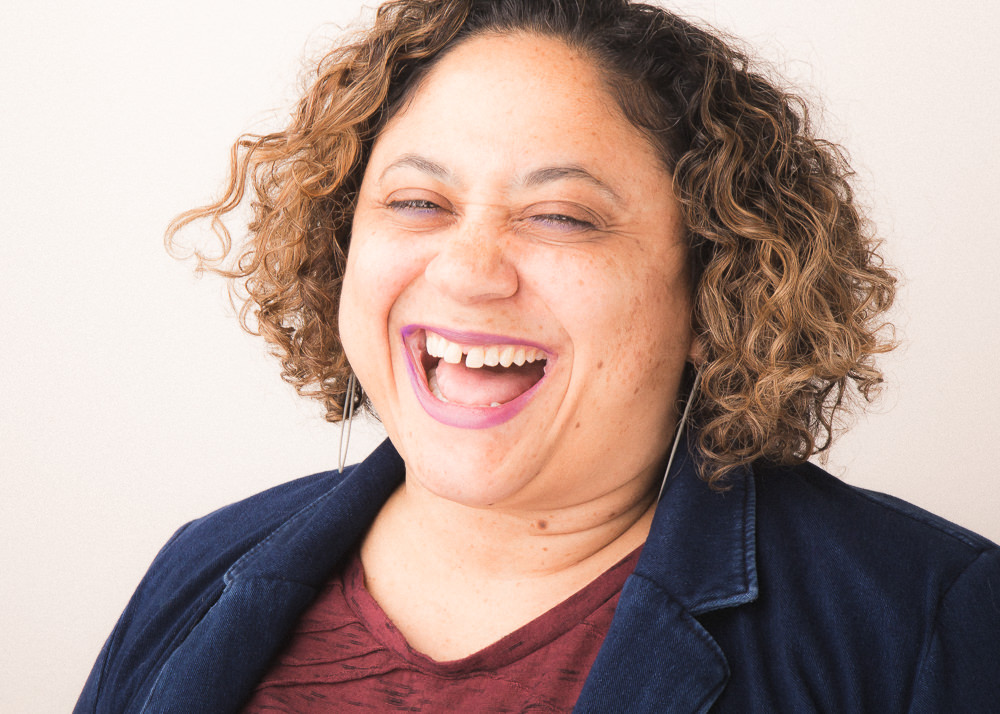 8
Meida Teresa McNeal
Artistic Director, Honey Pot Performance and Arts & Culture Manager, Chicago Park District
As a working performance artist, Meida McNeal has been awarded just about every dance and multidisciplinary performance grant mentioned within this list: High Concept Labs Sponsored Artist, Links Hall Artist in Residence, Chicago Dancemakers Forum Lab Artist, plus a Fulbright and at least a dozen more. But it’s McNeal’s work as a performance scholar and administrator that lands McNeal on this year’s behind-the-scenes list, which makes one wonder how she finds time to manage Arts & Culture for the entire Chicago Park District and cultural centers while running Honey Pot Performance and producing scholarship on postcolonial Caribbean performance. The answer: McNeal is a powerhouse creatively, intellectually and all-around, roll-up-your-sleeves energetically.

7
Tim Rater
President and Chief Executive Officer, Paramount Theatre
Still in its relative infancy, as theater companies go, Paramount Theatre continues to capitalize on the success of its Broadway Series, which launched in 2011. A $2.5 million grant, awarded last year by the Dunham Fund, is being applied to the company’s Act 2 Capital Campaign, the capstone project of which is the creation of the Paramount School of Performing Arts, currently under construction. The School will “encourage and train young actors, dancers and musicians for a culture-filled life, nurture the arts in Chicago’s western suburbs and add to the excitement, cultural and economic activity in Aurora’s downtown business district.” One new turn deserves another: this season will see the Paramount’s first world premiere. The first major project from the company’s New Works Development Program, “August Rush” will be a co-production with Arlington, Virginia’s Signature Theatre and will feature actor-musicians a la “Once” and “Million Dollar Quartet.” And while it seems that theater lovers need little incentive to head to Aurora, the chance to see a Broadway-quality musical before anyone else is an opportunity that no one will want to miss. 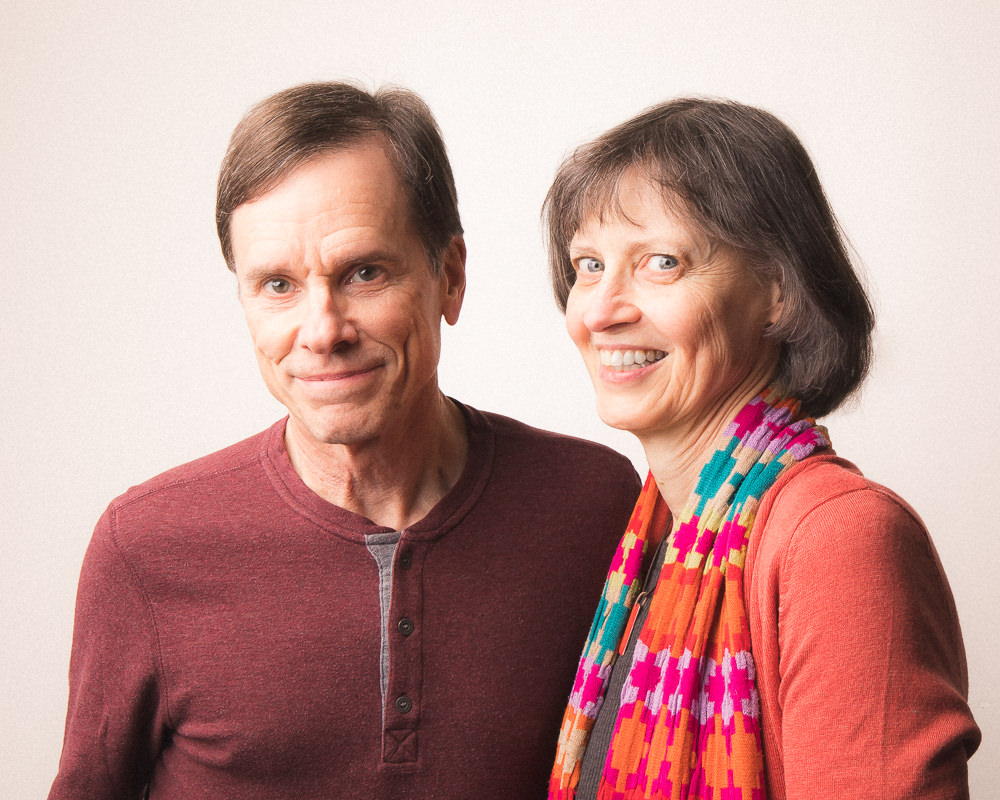 6
Michael and Mona Heath
Michael and Mona Heath see more theater than you—330 shows in 2018 alone. It’s not a competition, but it is, nevertheless, a fact. The couple is motivated by a deep admiration and love of storefront theater and a radical sense of transparency. Their website not only lists the theater companies they support through grants and donations from a donor-advised fund at The Chicago Community Trust, but also an explanation as to why they support each company and production. If their name sounds familiar, it’s because you’ve seen it in the back of a program or heard it in a pre-show announcement or, in their highest-profile project to date, visited the Den Theatre’s Heath Main Stage. Yes, they are those Heaths. What is most refreshing about Michael and Mona is their low-profile approachability. While you can find them at most opening nights, where you won’t find them is banging down the doors of the companies they support demanding access and privilege. In an age that can feel defined by quid pro quo, the Heaths simply give. 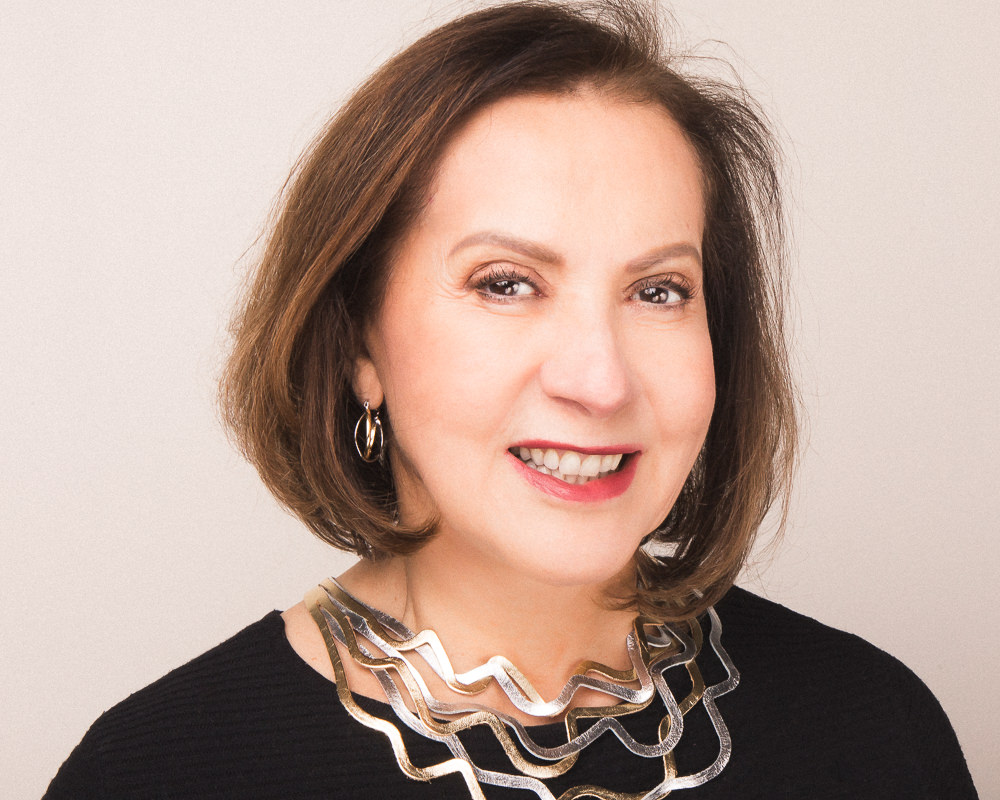 5
Myrna Salazar
Co-Founder and Executive Director, Chicago Latino Theater Alliance (CLATA)
Founded in 2016, the Chicago Latino Theater Alliance (CLATA) quickly established itself as one of the city’s premier new theatrical organizations. Its signature program, the Chicago International Latino Theater Festival, known colloquially as “Destinos,” premiered in 2017 as a month-long run of performances and productions at Chicago Shakes, Steppenwolf, Victory Gardens and the National Museum of Mexican Art in Pilsen. In its second outing, the festival expanded to seven weeks and included venues such as Aguijón Theater in Belmont-Cragin, The Miracle Center in Logan Square-Hermosa, and UrbanTheater Company in Humboldt Park as well as Teatro Vista and Water People Theater, in an effort to ensure that the international festival drives traffic to local Latinx institutions. With her experience at the International Latino Cultural Center of Chicago, coupled with the support of the MacArthur Foundation, Joyce Foundation, The Field Foundation and Department of Cultural Affairs and Special Events, Salazar’s nascent but successful festival has the space and funds to expand exponentially.

4
Mark Kelly
Commissioner, Department of Cultural Affairs and Special Events
Along with League of Chicago Theatres’ executive director Deb Clapp and outgoing mayor Rahm Emanuel, DCASE commissioner Mark Kelly named 2019 the “Year of Chicago Theatre,” a first-of-its-kind initiative designed to capture the attention of locals and out-of-towners alike with strategically placed advertising as well as $200,000 in grants and tie-in events across the city. DCASE has also “shifted its focus from being a dance presenter to a supporter of Chicago’s dance community,” hosting the Chicago Dance Month kickoff, collaborating with See Chicago Dance on the second annual SummerDance Celebration in Millennium Park, working with the Chicago Dancemakers Forum and presenting Elevate Chicago at the Chicago Cultural Center. The Department also showcased dance throughout the summer at Jay Pritzker Pavilion, including the Stomping Grounds Grand Finale.

3
Julia Stasch
President, MacArthur Foundation
In what turned out to be a professional and highly considerate mic drop, MacArthur Foundation president Julia Stasch awarded the whole of the 2016 MacArthur Award for Creative and Effective Institutions to Chicago arts organizations. Less than two years later, she announced that she would be stepping down from the position she has held since 2014. The Foundation’s “Chicago Commitment” remains a core value, with 2017 grants awarded to Albany Park Theater Project, Black Ensemble Theater, the League of Chicago Theatres, Emerald City Theatre, Goodman, Northlight, Steppenwolf, Court and Writers Theatre as well as Chicago Danztheatre Ensemble and Hubbard Street Dance. More recently, the Foundation awarded the International Connections Fund to the Auditorium Theatre, Blair Thomas & Company, and Links Hall. With the announcement last year that the Foundation will invest $24.3 million over five years to continue its support for Chicago-area arts and culture organizations, local institutions can count on the MacArthur Foundation even after Stasch moves on to her next venture.

2
Heidi Stillman and Rachel L. Fink
Artistic Director and Executive Director, Lookingglass Theatre Company
The leadership of the inimitable Lookingglass Theatre Company keeps a comparatively low profile, perhaps because the art the company makes tends to speak for itself. Under the guidance of artistic director Heidi Stillman, who took the position in 2016, the company, well-known for high-flying fare, has taken on grounded material that reflects our increasingly sober reality: Alexander Zeldin’s exquisite “Beyond Caring” and Dickens’ appropriately titled “Hard Times,” which was adapted and directed by Stillman. Even David Kersnar and Althos Low’s vision of Jules Vernes’ “20,000 Leagues Under the Sea” was anchored by an inescapable history of colonialism. Elsewhere, Kevin Douglas’ “Plantation!,” his follow-up to “Thaddeus and Slocum,” tickled ribs while tracing the roots and branches of America’s racist heritage. All that rigging doesn’t come cheap! Rachel L. Fink, the company’s executive director, brings a good deal of experience in managing interests and investments from her time as managing director of Theatre Bay Area. The company will continue to balance buoyancy and weight with upcoming productions of “Act(s) of God,” penned by ensemble member Kareem Bandealy and directed by Stillman, and David Catlin’s contribution to The Year of “Frankenstein.” 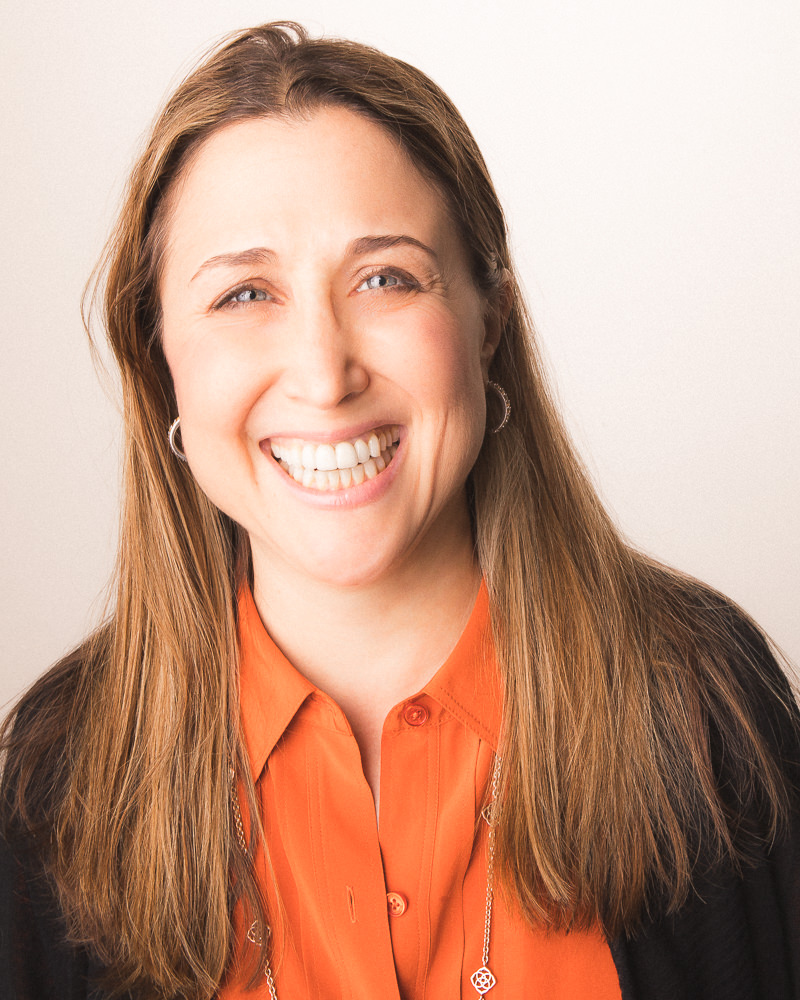 1
Chay Yew and Erica Daniels
Artistic Director and Managing Director, Victory Gardens Theater
There may be no theater in town better known for programming beyond the stage than Victory Gardens. The Director’s Inclusion Initiative, begun in the 2015/16 season, aims to “encourage and develop talented and emerging Chicago stage directors who identify as people of color, disabled, women, transgender, gender non-conforming and LGBTQ,” and has served as a shortlist of the city’s most promising young directorial talent. The Next Generation Fellowship, launched in 2018, is a “professional development program for rising career persons of color interested in theater leadership.” Victory Gardens also partners with Chicago Public Schools to bring drama to schools and students to the theater. Additionally, there is robust public programming around the company’s productions each season. The Resident Theater Program serves as an incubator for a few storefront companies, several of whom are also represented on this list.