They’re coming: backlit paper cutouts, dolls sculpted of foam and wire, shape-shifting scenes of sand, wood-carved likenesses of old men and whimsical figures on strings, all descending on Chicago from around the globe to relate stories of pathos, bathos, absurdist comedy, horrifying injustice and transcendent beauty—our most human dramas given profound life by lights, a curtain and humble bits of cloth or string. The Chicago International Puppet Theater Festival, running January 17-27 across the city, is the only one of its kind in the United States, and Chicago—originally home to the Works Projects Administration’s series of puppetry and marionette plays and progenitor of the term “puppeteer”—is perhaps its natural home. It’s also the creative playground of Blair Thomas, founder of the festival, one of the masterminds behind the now-defunct Redmoon Theater and a consummate artist who has been playfully poking holes in the boundaries of theater in Chicago for the last three decades. I spoke with Thomas about the festival, the resilience of collaboration, and the need for the irrational in art.

What was the impetus for the Festival?

In many ways, the Chicago International Theater Festival that ran from 1986 to 1996 had a formative effect on my career as a young artist. I wanted to generate a similar experience for artists in Chicago in the absence of that festival. Two public puppetry festivals in 2000 and 2001, one of which I initiated—Puppetropolis sponsored by the city of Chicago—[offered] an example of how a festival could be organized, in that it was collaborative. I had always harbored the idea to restart a festival and, when I brought it to my board, they asked how in the world can we do that? At the time we were barely a $100,000 organization. How could we organize a festival on that scale? Nationally, I was aware that our country didn’t have a national puppet theater festival at all.

I used my relationships with institutions I’d worked with that had presented puppetry in some way—the Art Institute, the Field Museum, Links Hall, the MCA, and everyone took it on. It was set up to spread out the burden of what it takes to put on a festival so when we try to do it again and one presenter says they can’t do it, it doesn’t fold.

It raises the profile nationally, too. in the same way the Chicago International Theater Festival changed the dynamic. I witnessed it because I arrived in 1985 and Steppenwolf and kitchen-sink drama, playwright-theater dominated. And then in came this stuff that was from a different planet to us. The audiences saw the work, the critics saw the work, the landscape changed. I’m trying to advance the art form. We are in the fourth decade of a renaissance of puppetry, nationally and internationally. That continues to be dynamic and the form continues to show its power in ways that are historically unprecedented. People who haven’t seen contemporary puppet theater will be shocked; they have no idea this is going on.

What sparked this renaissance?

What sparked the renaissance was the original Renaissance and the suppression of irrational thought. Rational thinking came to dominate; things that were considered irrational lost all credibility and had to go somewhere. For a while, they went nowhere. Then in the nineteenth century we had a lot of ghost stories. In the twentieth century fantasy literature emerged, then fantasy film emerged. The puppet theater turns out to be the domain of the irrational. There’s a puppet in front of you, you know it’s a puppet, it’s a fabricated thing. It looks like it’s alive. Your brain can’t process that irrational experience.

Along with the dominance of rational thought, there’s the proliferation of mediated images. Almost everyone is experiencing technology as the way images are impressed upon our sight, so when you go into the theater and see phenomenal images in front of you that are not digitally mediated it’s shocking. CGI is castrated from [holding] any real power because we know the bus didn’t actually flip over. But in the puppet theater, it’s in the same room with you and it becomes heightened compared to what’s outside the theater door. And it’s just fun. If a puppet went down the street, everyone would look. 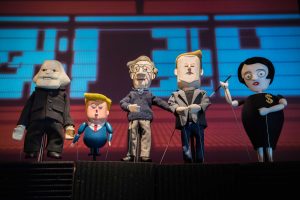 How did you approach curating the festival?

I respond to work that excites me, but I’m also trying to have a broad range of work that will reach audiences who are young and who are old and… cynical. We have work for many different ages and preferences. Having silly puppet theater and serious puppet theater, having technique-based work and traditional work. Puppetry comes out of two categories: the sacred and the profane. Satire is in the profane. Things that are quietly moving are in the sacred. The form can easily move in-between. If you see “Manufacturing Mischief,” it’s a satirical piece. If you make a little puppet of Donald Trump and you put it next to a puppet of Noam Chomsky that’s just gonna be funny. Whereas the sacred: “Ajijaak on Turtle Island” when the turtle enters it’s a profoundly beautiful thing to see on the stage. So puppet theater is going to fit in those categories with a lot of nuance in between. 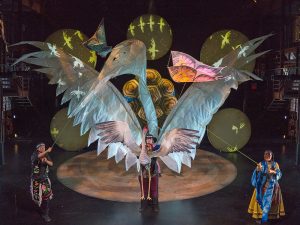 I read on your website that Chicago can lay claim to the term “puppeteer.”

It’s true. The story of the director who was working with the theater after World War I in the Fine Arts Building where we have our offices: her puppeteers, her performers at the time would be called showmen. And she thought, well, they’re reciting Shakespeare and operating marionettes, this is not a showman. So she combined the term puppet and muleteer [or “mule driver”]. What’s interesting is how the work that is happening today wouldn’t be possible without the coining of that term. At the time, in 1914, that was the Modernist period when the puppetry we’re seeing today was hatched. Artists were using puppetry in the theaters and cabarets similar to what’s happening now. There was a strong interest in the primitive arts at the time and puppetry had a connection to the primitive arts. Today puppetry is being used to make theater and it’s not like it’s purely a hand puppet show or purely a marionette show. Today, all of a sudden a giant puppet could come into the space and that’s part of the vocabulary. 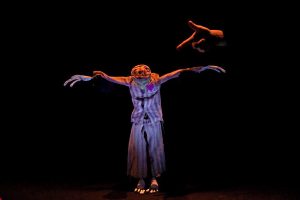 Most of the stuff in the festival is nontraditional. A very good example is Plexus Polaire, whose “Chamber Noire” is about the woman who made an assassination attempt on Andy Warhol. She plays older and younger versions of this woman. There’s a dialogue between the puppet and the puppeteer that’s very unusual. Or “Schweinehund.” Andy Gaukel is telling a wordless story about a man accused of being a homosexual in World War II and placed in a concentration camp until he is eventually released. He’s using puppets and Bunraku. He’s also using his hands and boots and film projection on a scrim to create a composite image, without any spoken word. It’s a very powerful and palpable telling of that story.

Can you speak a little about the physical relationship between the puppet and the puppeteer? I usually write about dance, about human bodies moving in space. In puppetry, the body of the puppeteer is the source of the art, but less visible, or not where the focus is supposed to be.

In the period of time when the notion of “thing theory” is in the zeitgeist, even attributing a will to the non-sentient material that functions similarly to will in a sentient being. We’re very aware the performer’s ego is part of the foundation of bringing the object to the stage. But there’s a quality to the performance that is fundamentally different if the performer is working with an object that is made out of foam, versus one made out of ice or paper. So the material world has an intelligence that the puppeteer has to be able to translate and engage with. On the most simple level, if the puppet has been anthropomorphized, there’s that. But what the puppet is made out of is very important and becomes part of the relationship the audience witnesses, between the human and the non-human. The non-human world has something to speak to us and it speaks in a non-human language; the puppeteer needs to be responsive and is the translator or the ambassador for that knowledge. For the most part, we humans turn to other humans to find out what’s going on. We might look to the natural world to see what species we’re killing off or what’s preserved, but it’s about how it effects us. Mostly audiences will look at puppetry as anthropomorphized versions of themselves, but there’s more going on.

For example, this year Mocrep is not anthropomorphizing. Mocrep is a group of musicians who work with objects based on musical scores. A lot of people would say “why is this in a puppet festival?” and those people shouldn’t see it, they should see Teatro del Drago’s “Pinocchio.”

What do you hope for the future of the Festival?

That it’s here in ten to twenty years. But we only present every two years, so we’re looking to do more programming in between. We want to make audiences hungry for high-quality puppet theater. And demanding of it.