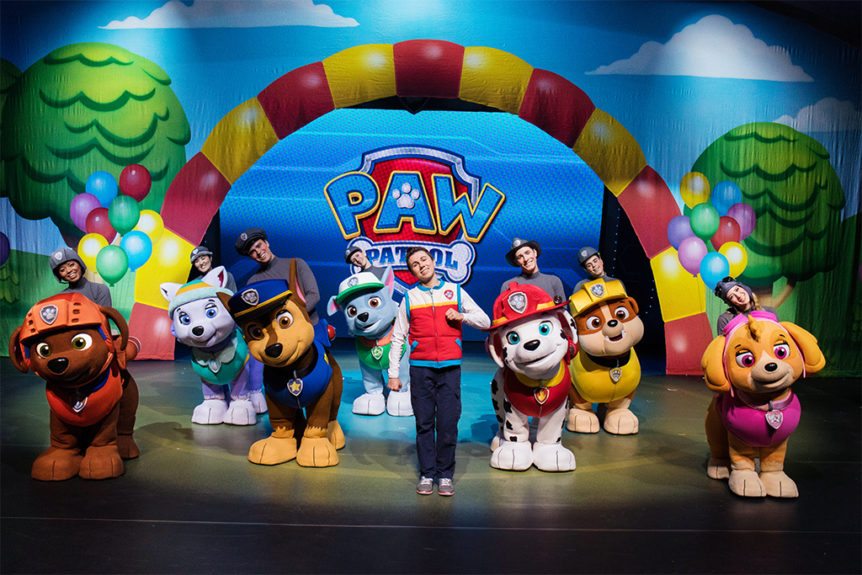 The cast of PAW Patrol Live!

“Is that about dogs?” a woman coming down the stairs behind me from the State/Lake train station said to her travel companion Sunday evening, suspiciously eyeing the exclamatory “PAW Patrol Live!” on the historic Chicago Theatre’s marquee. Is it about dogs, ma’am? Dogs?!

Okay, technically yes, that’s exactly what it’s about. Good guess. But, while the members of the PAW Patrol are in fact dogs, they’re also much more: they’re an elite squad of rescue pups, each with a very particular set of skills, like a group of miniature, canine, very polite, Canadian-accented Liam Neesons from “Taken.” And yes, they have Canadian accents. Because in the TVOntario/Nickelodeon media empire of a world created in 2013 (and five seasons later has infiltrated the minds of toddlers and preschoolers everywhere, along with their parents’ televisions and wallets), dogs can talk.

What? No, of course other animals can’t talk. That would be crazy. Only dogs. Also dogs can drive vehicles. Because they have to be able to get places to rescue people and other (nonverbal) animals, which is what they spend the majority of their time doing in their seaside home of Adventure Bay.

A peek down any toy or clothing aisle in any major retailer will reveal that this is a very popular thing. And along with the expanding “PAW Patrol” universe of merchandise, apparel and animation, since October 2016 there is also a “PAW Patrol Live!” touring stage show. In fact, there are two different shows, simultaneously touring the country.

Even the most cynical and anti-commercial among us have to see this as a huge live-theater win. Jobs. Shows. Ticket sales. Little tiny butts in seats, experiencing live theater in the year of our digital lords 2019. Potential future theater patrons. Don’t forget that.

The show that stopped by the Chicago Theatre for six performances over two days on a snowy mid-January weekend was “Race to the Rescue,” the original 2016 show. (The other, newer, show is called “The Great Pirate Adventure”). Over the course of seventy-five minutes—with a fifteen-minute intermission midway through that featured strong encouragement to go to the lobby and pick up some exclusive souvenirs—the members of the PAW Patrol find themselves in a race with the sneaky and mustachioed Mayor Humdinger (mayor of the neighboring—and frequently rivalrous—town Foggy Bottom) to find three clues and cross a finish line.

It’s a thin plot and really, come on, it doesn’t matter at all. The point here is that we’ve got a framework to get the beloved characters from the cartoon onstage, in person, to ask us to wave branded pom poms, cheer as loud as we can and please (really) buy some merchandise while you’re here. The plot also gets us—and our heroes—to a number of very different locations, all wonderfully realized by the simple (but detailed) set pieces and the elaborate digital display splashed across the back wall.

With this digital backdrop we go from a beach to a snowy mountain to underneath the ocean with scene changes that are so quick they’re hardly noticeable. The performers—some portraying humans, some portraying dogs in what look like very effective crosses between giant puppets and full body costumes—stay amped up throughout, with that wide-eyed, over-excited delivery style that appears only in kids’ shows.

“I’m a fire pup and I’m fired up,” quips Marshall, the fire engine dog, early on. Marshall, we are all with you on that sentiment.

Is “Race to the Rescue” a money grab from a big commercial entity? Maybe. Is the script overplayed and underdeveloped? Sure. Are there less gimmicky, more emotionally resonant children’s theater options available in the great city of Chicago? Absolutely.

But is the talented, young, diverse cast of “Race to the Rescue” getting paid to travel on a national tour right now? Are youngsters across the country excitedly coming out for live theater? Did my two-year-old son look up at me and say, “Can we go to a show again daddy?” as we left the theater amid a throng of laughing, screaming and tantruming preschoolers? Yes, yes and yes.

“Race to the Rescue” has passable songs, near-constant audience interaction, and cool, constantly changing sets. My son was enrapt the whole time. Anyone looking to raise a theatergoer could do much worse than jump on the bandwagon of one of these television behemoths crossing over to live stage.

So yes, this is a show about dogs. But it’s about so much more. Like buying popcorn and merchandise. (Zach Freeman)