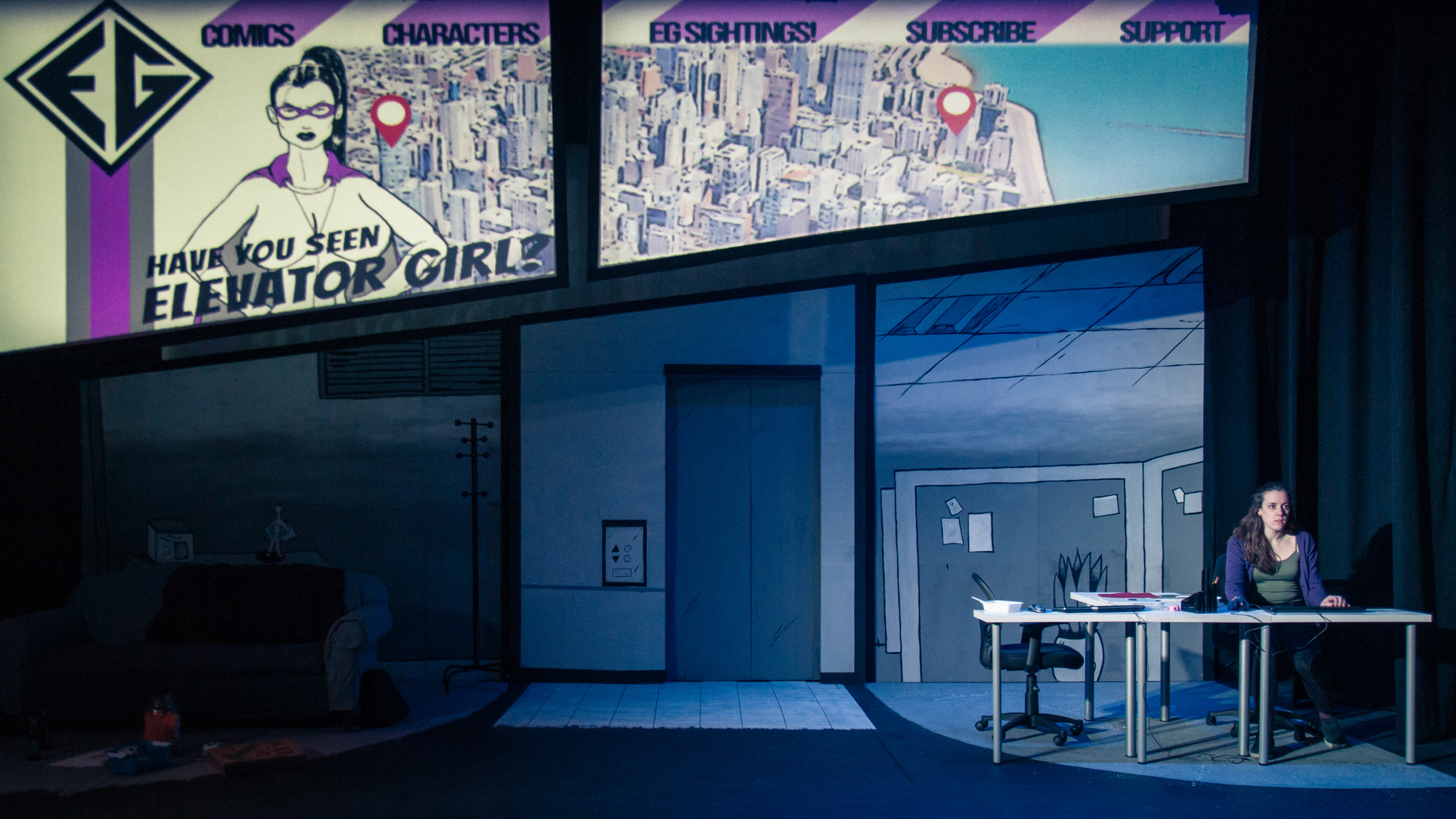 How can the American Theater battle the forces of Toxic Masculinity that consistently pervade society?

First and foremost: Megan Chaney’s scenic design for “Elevator Girl,” a comic-book panel-inspired set with a functioning elevator door, immediately conveys a sense of the universe that we’re stepping into for the evening in a playful and exciting manner. On top of that, Erin Pleake’s projection design, including some supremely intricate moving silhouettes, is one of the most impressive pieces of design I’ve seen on the storefront level (and then some) in quite some time.

The play is about the lives of Vanessa (Alex Madda), Peter (Sean Wesslund) and Richard (Alexander Utz), three characters who are friends mainly by necessity of the plot. (Richard’s childish sexist behavior becomes tired within his first scene). Peter is trying to come up with a new comic-book hero (whether they work for a major publishing house, or if this is an independent effort, remains unclear), when Vanessa throws him the bone of EG, completely ignoring any of the ludicrousness and inanity that comes with the hero’s central premise. Again, a character who fights potential sexual assaulters by… sexually assaulting them. That this character is created by Vanessa, a character who we learn is a sexual assault victim herself, with little-to-no qualms about the implications of EG, erases any sense of believability.

The primary explanation given for EG’s purpose is that this is a sick “revenge fantasy” for these men. A woman surprising them with sexual favors is giving these men a taste of their own medicine. This, of course, discounts the experiences of many men who are also the victims of sexual assault, a point that the play brings up far too late. In fact, the general pushback against the concept of EG doesn’t arise until much further into the narrative when the character has become a viral sensation, which, based on the character’s premise alone (alongside the authorship of the EG comic book given solely to Peter), seems implausible in 2019 Chicago, outside of 4chan forums and alt-right circles.

With a pace that is somehow both extremely rushed and painfully slow, and dialogue that makes Archie Comics sound like “Watchmen,” “Elevator Girl” attempts to spark valid and important discussions about sexual assault and gender tropes in the comics industry. But by building its arguments upon a foundation that is inherently flawed, this elevator isn’t going up anytime soon. (Ben Kaye)