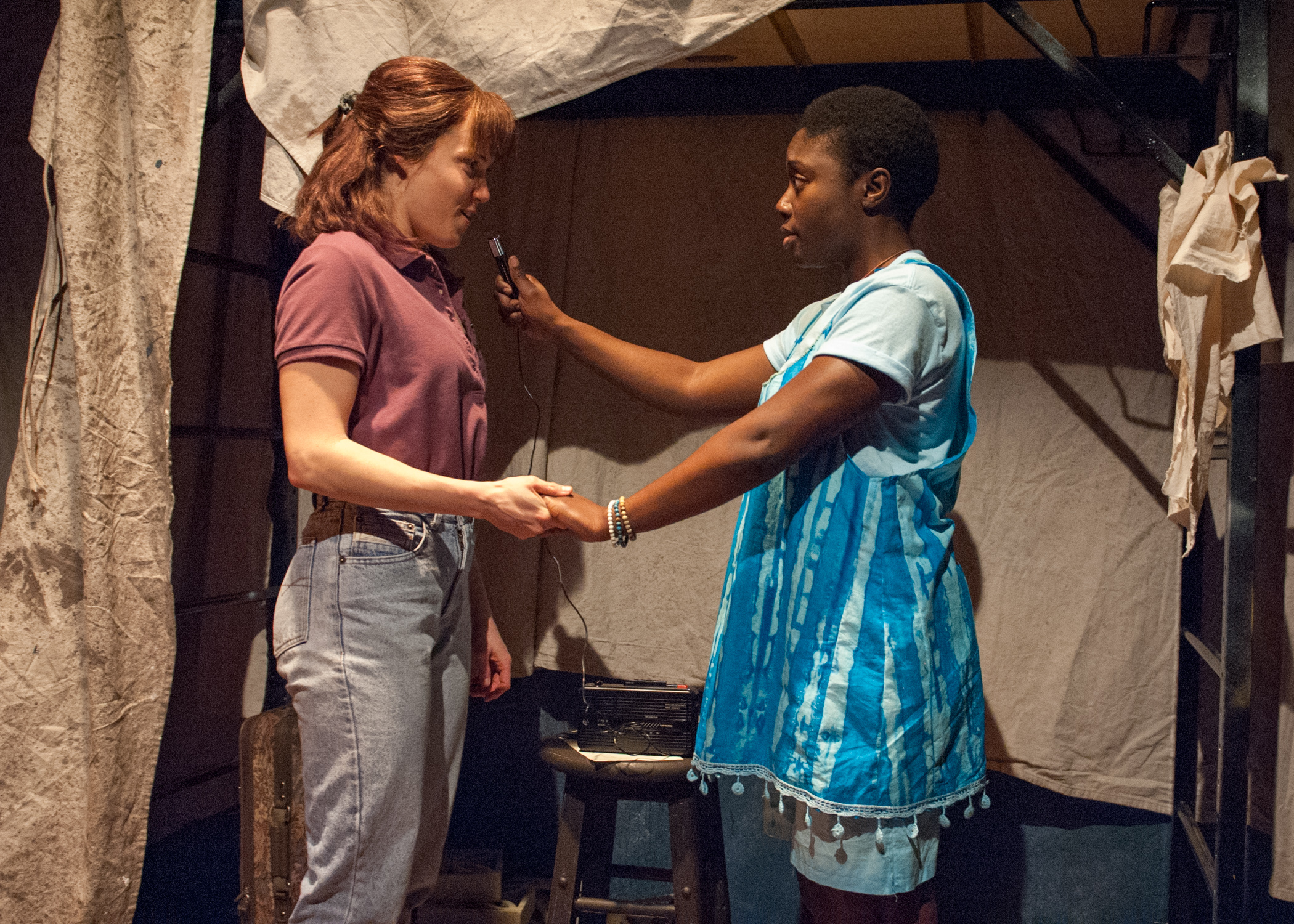 “Time goes by so slowly
And time can do so much”
– The Righteous Brothers, “Unchained Melody”

Adiel and Chris have one night to plan the rest of their life together. They’ve snuck into the church that Chris’ pastor father helped build in Northern Uganda. There are candles placed in tin cans scattered throughout the pews. Flower petals have been ritually adorned along the floor. And an altar is awaiting the makeshift nuptials of these two young women, ready to move into the new millennium together.

“Cardboard Piano,” Hansol Jung’s emotionally rich drama, making its Chicago premiere at TimeLine Theatre Company, is as delicate and priceless a work of theater as the object of the title, which is brought to life in a story that Chris (the heartbreaking Kearstyn Keller) shares about how her father gave her a cardboard piano that she ripped to pieces in frustration. But the pastor taped the piano back together again: a broken object to be fixed. And so, we are led to believe, anything that is broken can just as easily be fixed.

But what does it mean to be broken and to be fixed? Can a broken soul be mended through forgiveness? What are we truly willing to forgive? Isn’t everything, in some way or another, truly broken? Sure, a piano made of cardboard can be fixed just like that. But what if there are just some things that can’t be fixed?

I’m doing my best to avoid discussing specific plot details of “Cardboard Piano,” a work that is best discovered as a slow simple melody, several notes played one by one, before emerging as a painful chord. Under Mechelle Moe’s gorgeously paced direction, it eventually becomes clear that Chris’ planned marriage to Adiel (the fearless Adia Alli) will fall to the wayside as an unexpected visitor (Freedom Martin in a blistering performance) interrupts the ceremony with earth-shattering repercussions.

The second act takes place many years after the first—respect is due to the brilliant tech crew that makes this transformative scenic transition happen over the course of intermission—and while certain actors may play different characters in each act, the violence, hatred, and pain that rests in their hearts still lingers onwards, culminating in the brilliant performance of Kai A. Ealy, completing the show’s quartet of actors, as a man whose capacity for forgiveness is put to the ultimate test.

As with many of TimeLine’s productions, there is a brilliant lobby display to supplement the production (in this instance, designed by Dina Spoerl), here including pieces about LGBTQ+ activism, spiritualism vs. religion, and the history of the Truth and Reconciliation Commission, providing some hints as to what you’ll be grappling with during what I’d call the first must-see show of 2019.