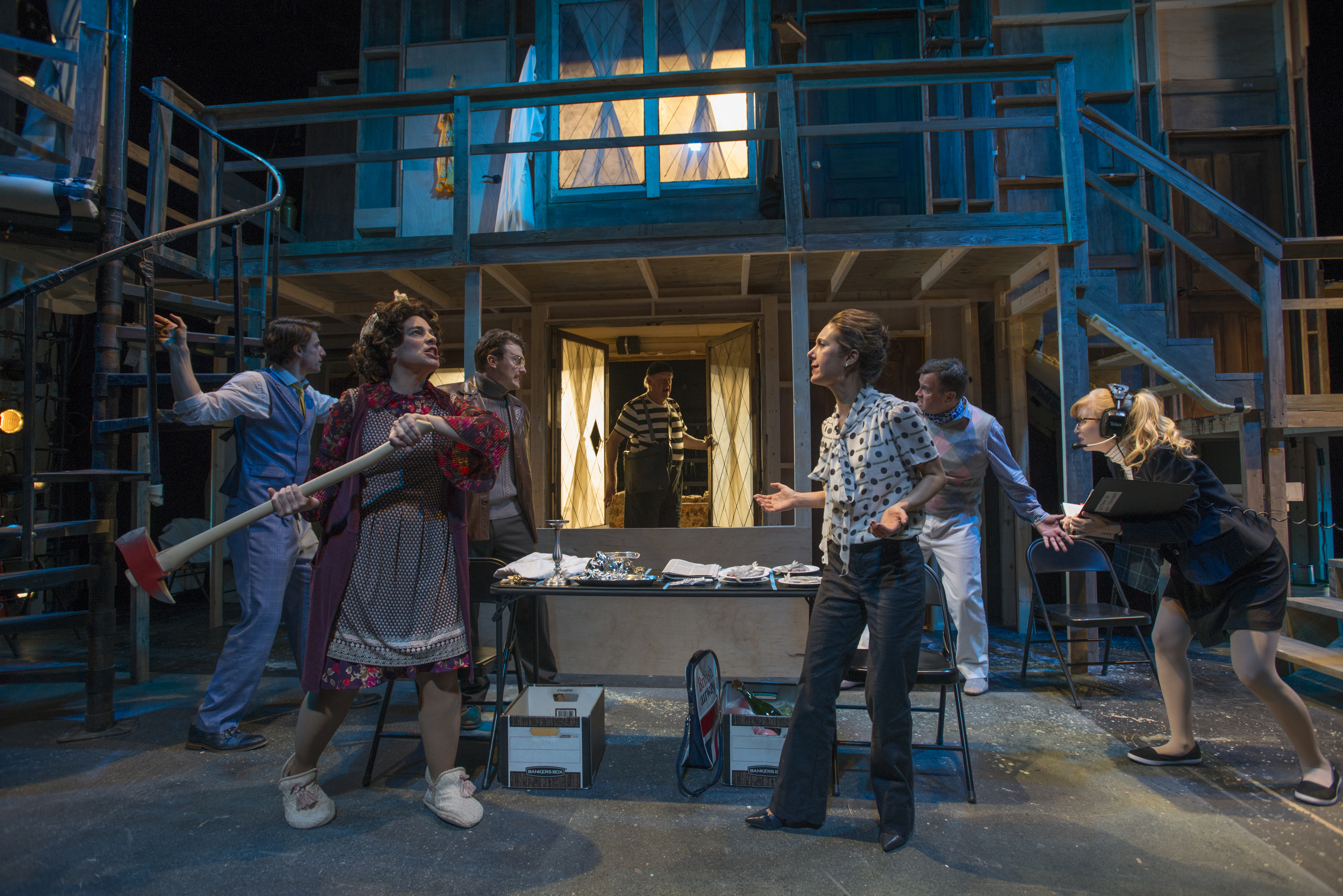 Cast of “Noises Off” at Windy City Playhouse/Photo: Michael Brosilow

“Getting the sardines on, getting the sardines off!” is how third-rate British theater director and first-rate cad Lloyd Dallas (played by Mike Tepeli) sums up the fourth-rate sex farce he’s helming (titled “Nothing On”) to his fifth-rate cast. The line’s emphasis on the mechanics of theater, devoid of feeling or meaning, sums up “Noises Off,” Michael Frayn’s 1982 backstage comedy. Windy City Playhouse’s revival is consistently amusing and technically excellent but cannot conceal the calculated emptiness of the author’s conception.

The piece is a three-act Rube Goldberg device of crazed movement and synchronized split-second timing which breaks down disastrously by final curtain. The play’s gimmick is that we see the same funny-awful play-within-a-play three times, twice from the front of the stage and once behind it, allowing us to spy on the hectic inner workings of “Nothing On,” as well as the performers’ toxically entangled romances and jealousies.

Windy City specializes in immersive experiences, which means the audience moves en masse to the theater’s cramped backstage area for the second act. In the capable hands of director Scott Weinstein and set designer Jeffrey D. Kmiec the trick works, shredding the show’s fourth wall and making us part of the dysfunctional drama. The play reaches a peak of hysteria the second time around as the increasingly angry and inebriated actors confront and sabotage each other, turning the over-controlled, scripted mock farce into the appearance of a genuine fiasco, which paradoxically makes for better theater.

But the third time is no charm. We’re subjected to the Keystone Kops pacing of a plot that’s so deliberately inane it’s not worth paraphrasing, about thwarted trysts and tax-evading homeowners and doddering burglars and vanishing sardines. Despite the best efforts of a game and professional cast—including Rochelle Therrien as a talent-free, contact lens-losing actress who murders the part of the lingerie-clad ingénue, and Will Casey as a hammy, sodden old trouper playing the stripe-shirted cat burglar—this time the slapstick sound and fury really do signify nothing and go nowhere at all.

It’s a crowd-pleasing show performed to exhausting perfection here, but there’s something off amid all the noise, which hits afterward, like heartburn following a too-rich meal. Maybe it’s the lack of human touch in any of the two-dimensional characters, or the snarky sadism that pervades the script, or the absence of any point to the unrelenting madness. There’s no Charlie Chaplin-style commentary here about the soul-killing rhythms and demands of a mechanized, factory-style environment. In fact, Frayn’s play seems to relish the misery of its characters, who apparently deserve their victimhood due to their graceless mediocrity. “Noises Off” is exactly what it purports to parody—showbiz as a kind of cruel machine—and every one of the many laughs it extracted from me made me feel a little bit worse about myself.