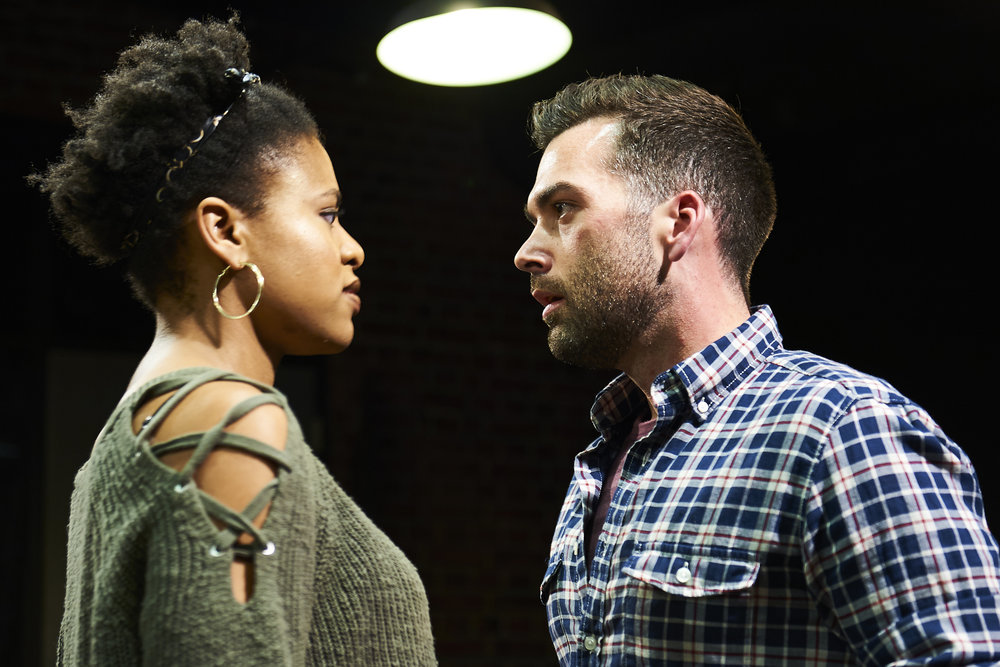 Up to now, the defining mantra of playwright Ike Holter’s work has appeared to be “tough but fair.” With few exceptions, the general (and frequently very specific) ribbing between his characters has felt like it came from a place of love. Don’t eat the meat at Nunley’s; everybody knows it, him most of all. Even the betrayals are best understood in terms of self-protection, though, honestly, that has never made them any easier to witness. Holter is immensely talented at shifting an audience’s moral allegiance from one character to the next. The end result is the destabilizing sense that everyone is right, at least about something. Word around town is that he’s set his sights on Hollywood. The thought of Holter’s work getting in front of not just hundreds or thousands but potentially millions of people is diabolically pleasing. His consistent volley of one liners, quips and non-sequiturs softens you up like a mallet. And before you know what’s happening, you’re being sliced open by the cleaver of his dramatic acumen. Holter is a master technician of emotion and he knows his audiences well.

“Red Rex,” Holter’s meta dramedy about a storefront theater company of the same name, set in the fictional fifty-first ward of Rightlynd, is the penultimate work—both sequentially and in terms of production—of his seven play Chicago-set series (the saga will conclude with “Lottery Day” at the Goodman later this year). And while I had the misfortune of missing “Exit Strategy,” from my cushioned and comped perspective, Holter’s work turned a corner at “The Wolf at the End of the Block” and has never looked back or ceased charging forward. And while “Red Rex” feels like a natural continuation of “Rightlynd” (which premiered only a few months ago; this is the Holter way), it reminds me most of “Sender,” a rather unflattering sendup of Wicker Park millennial hipsters and the sordid lengths to which they will go to preserve their fragile autonomy.

Holter has a knack for writing both within and without communities, seeing them as they are and how they want to be. And while it’s tempting to say that by leveling his incisive gaze at Chicago’s storefront theater scene he noshes on the hand that feeds, “Red Rex” deals in legitimate criticisms of our humble cottage industry and its echoes to international conflicts regarding race and gender, representation and justice. Couched in observations about the insecurities of actors, the egos of directors, and the grit of techies, not to mention the fidelity of playwrights, “Red Rex” has the undeniable whiff of authenticity about it. Where plays like “10 Out of 12” and “Red Bowl at the Jeffs” possess more inward-facing anxieties, sequestered as they are in single locations with nary an outside perspective in sight, this is Rightlynd. A recurring joke concerns the absence of locked doors. The outside world can—and does—walk right in.

Buffeted by moments of tenderness (a conversation between a stage manager and a set designer finds Holter at his most effectively empathetic), “Red Rex” is dominated by cruelty. It has not one but two near-irredeemable villains, one who gets what’s coming, the other living with a ramrod running from spine to sphincter, which I suppose counts as its own kind of comeuppance. The play has a lot to say about white entitlement, though as far as the audience-as-target approach goes, the border between what whiteness hears and what whiteness will listen to is not fixed and is subject to unscrupulous and unsubtle whims, a reality with which Holter is undoubtedly aware. Who knows if the theater people who will flock to see this play (and they should flock) will recognize themselves in the more socially sinister elements of the plot. My hunch is probably not. Such is the unfortunate side effect of widespread wokeness, which these days feels more like preemptive exculpation for anyone who has read Ta-Nehisi Coates and attended a SURJ meeting. What does it take to conceive of yourself as a force of passive destruction, culturally or existentially? Frankly, more than many of us are able to muster most of the time. Woe is we, or whatever.

On opening night, I couldn’t help but fixate on an attendee who wore a t-shirt that read “Be An Ally,” a message so on the nose that I wondered if they were a plant. As anyone with a pink pussy hat in the back of their closet might tell you, virtue signaling is a brand whose stock is undeniably on the rise. Apparel activism appeals because white people want to have conversations about race the same way that we want organic vegetables and responsibly-sourced wool shoes: as a reward for opting into narratives centered on our moral righteousness and spiritual (if not economic) generosity disseminated by powerful institutions for their own financial gain. Theater is no exception. We are known to be an industry that postures self-awareness while regularly practicing something closer to opportunism. The relentless meanness here smarts, but then again maybe it ought to. (Kevin Greene)