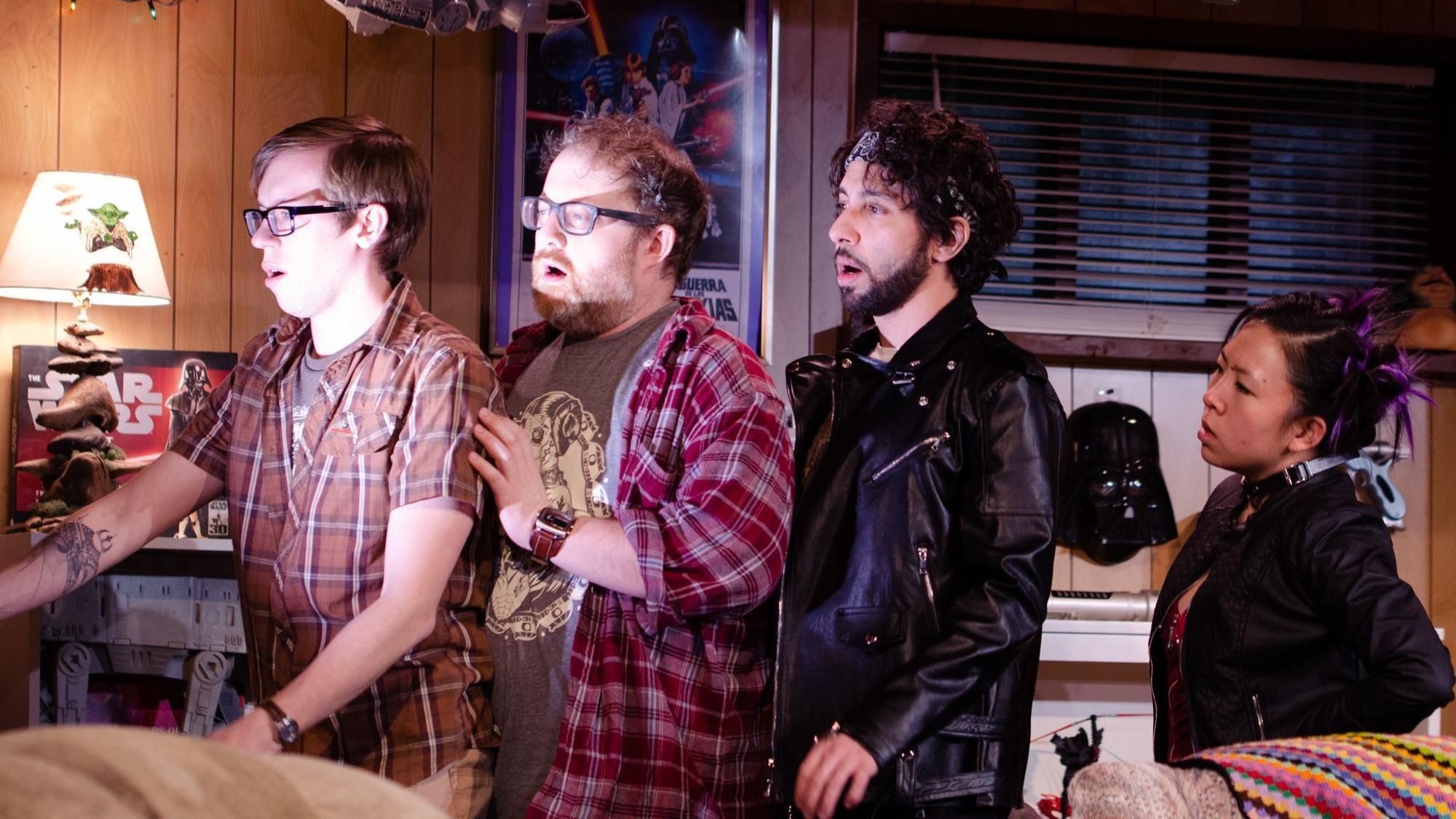 I’d be remiss if I didn’t begin by saying  an entire room in my home is dedicated to nerd-dom. My husband Kyle is an unabashed “Star Wars” fan. I married into the culture: we even had a lightsaber battle to the “The Imperial March” as our grand entrance at our wedding reception, though to be fair, that was my idea.

As for me? I love the Porgs from “The Last Jedi” and C-3PO is my favorite character. I also like to jump into conversations by saying, “What’s a Star War?” and “Jar Jar Binks is a Sith Lord.”

The basis for “All Childish Things” is simple: Dave (Eric Eilersen), Max (Bobby Richards), Carter (Alberto Mendoza) and Kendra (Stephanie Shum) are planning to rob a toy warehouse of a trove of expensive “Star Wars” memorabilia. They’ve planned the heist for months and the night has arrived. And yes, there is squabbling about the importance of the galactic franchise pointed directly at Carter’s girlfriend Kendra, whose title of “nerd” is questioned.

As a person who has attended conventions, the concept of not being “nerdy” enough is painfully real. The hard outer shell of Shum’s Kendra felt all too familiar. So, don’t be a malfunctioning little twerp and say one fandom doesn’t belong if the others do. Singling out the one woman in the show repeatedly—lookin’ at you, Dave—brings up a whole other issue. Women not being accepted in fan culture is a real problem, but this is a comedy that doesn’t dive into that can of space worms.

If the trio of “Star Wars” bros from “All Childish Things” were in a room with me they’d probably call me a “scruffy-looking Nerf Herder.” I dabble in their world, nothing more. So who am I to talk about it? In fact, Max would probably Chewbacca-growl at me. Which I wouldn’t mind, because Richards’ Chewbacca growl is delightful.

So I had to take my husband to this play and warned him he’d be featured in this review. As a mere nearsighted scrap pile, I need to step aside to acknowledge the real fan.

From the get-go, Kyle was enamored by the set. Between the achingly familiar Midwestern wood-paneled basement designed by Angela Weber Miller to the impressive “Star Wars” collection curated by Cassy Schillo and Wendy A. Huber, Dave’s nerd cave gave us a lot to talk about before the show even started. We were fond of the bumper stickers decorating the column in the center of the room. I desperately want to acquire the R2-D2 beverage cooler and Kyle particularly loved the lightsaber lamp. There is even a Jabba the Hutt figure on the windowsill. It’s hard to see, but I giggled when I found it. For a show literally rooted in the value of merchandise, it’s only fair for the characters to be literally surrounded by a ton of merch, vintage and new.

Collectively, our main gripe is the text. Playwright Joseph Zettelmaier crams so many references into the show that it becomes clunky and unnatural. If the intention is to solidify the stereotype of the overhyped nerd, it works. It is funny, but clunky, too, it is.

Also throughout the show there were moments so caught up in the moment that the physicality and vocal variety got lost in the mix. Even so, you don’t want to miss Mendoza rockin’ out in a rocker or Eilerson bonding with Richards over childhood nostalgia.

And like any good franchise there is that actor that solidifies our love of it. In “Star Wars,” it’s Alec Guinness for Kyle and Carrie Fisher for me. And for “All Childish Things,” it’s Joe Foust.

But I will say this: if you’re hesitant to attend a show that makes you laugh until you ugly-cry go see “All Childish Things.” Resistance is futile. (Amanda Finn)