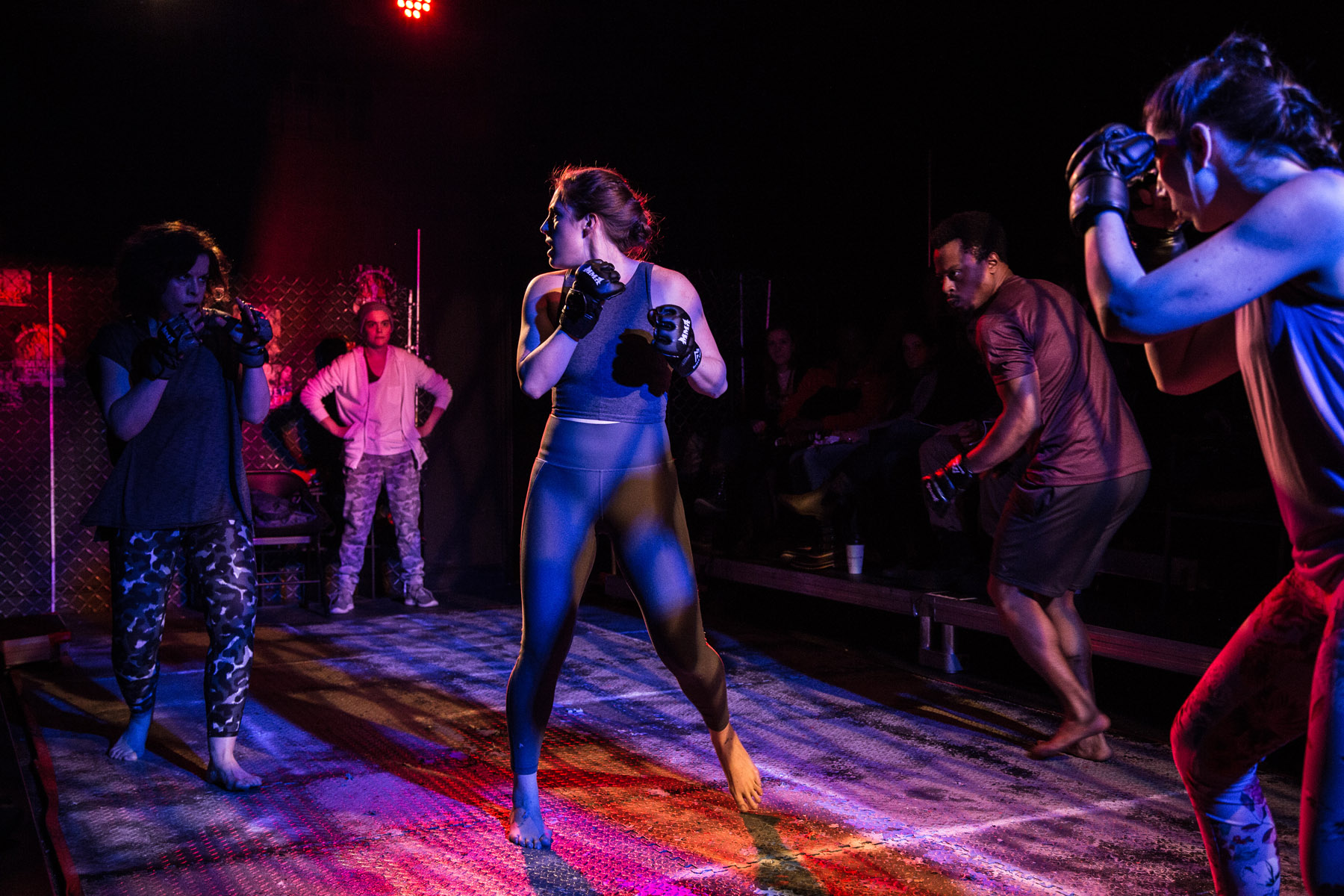 Stephen Spotswood’s “Girl in the Red Corner” is fast-paced. A tight hundred minutes with a brief intermission and the scene work follows suit: no air between lines or punches; no time to think. Mid-aughts alt-rock leads transitions. It’s entertaining, and the politics of femme anger and conflict are nothing to turn your nose up at. As Broken Nose Theatre’s artistic director, Elise Marie Davis, notes in the program, all those fight-y plays we’ve seen in the last few years (Red Theater’s “Chad Deity,” the Neo-Futurists’ “Seven Fights,” Victory Gardens’ “Sucker Punch”) are really dude-heavy. So, yeah. It’s a femme and non-binary fighting show.

Davis plays Halo: recently divorced, currently unemployed, blue collar, furious. Counter and coach to her is Gina (August N. Forman), former opioid addict, current MMA fighter, and tough-love/tough-shit practitioner extraordinaire. This pair forms the quiet, furious center of the show, with punches like punctuation at the end of their rage. Halo’s family and their fights orbit and strike, breaking into the safety of the gym. Forman and Davis are magnetic together. The former’s slow, vulnerable opening up is excellent acting work and demonstrates how good acting can overcome an okay script.

“But,” you begin to think, “mysterious reviewer! Feminist play, entertaining, quick? Fighting? What else do you want?”

That’s the question, right? Despite Forman’s captivating work and Davis’ long shape, there’s still another two-thirds of the play that doesn’t involve Forman and that’s where things feel a little wanting. The other ensemble members do good work, but Spotswood’s play shares more in common with movies where a close-up replaces actual acting work. Scene changes are awkward after the second round of angsty middle school favorites. Despite the scene work being fleshed out, the script leaves no space for the character growth. Apart from Davis, none of the characters make active decisions on stage, instead they veer all scenes toward catharsis.

Director Elizabeth Laidlaw rolls into this. She grounds the show in the moment-to-moment with all the actors. To their credit, they do what they need to do. The show ultimately feels like a vindication of Halo’s zealous bullheadedness as the Only Right Way because nobody else gets to develop. Between these nitpicks and the noncommittal design (What’s that scoreboard doing? What’s up with the medical posters?), the artist in me needs a little more substance.

But for a pay-what-you-can show? Craft issues aside, it’s got some clever lines and Davis losing her shit at a Comcast customer feels righteous and good. Go for it. (Jay Van Ort)