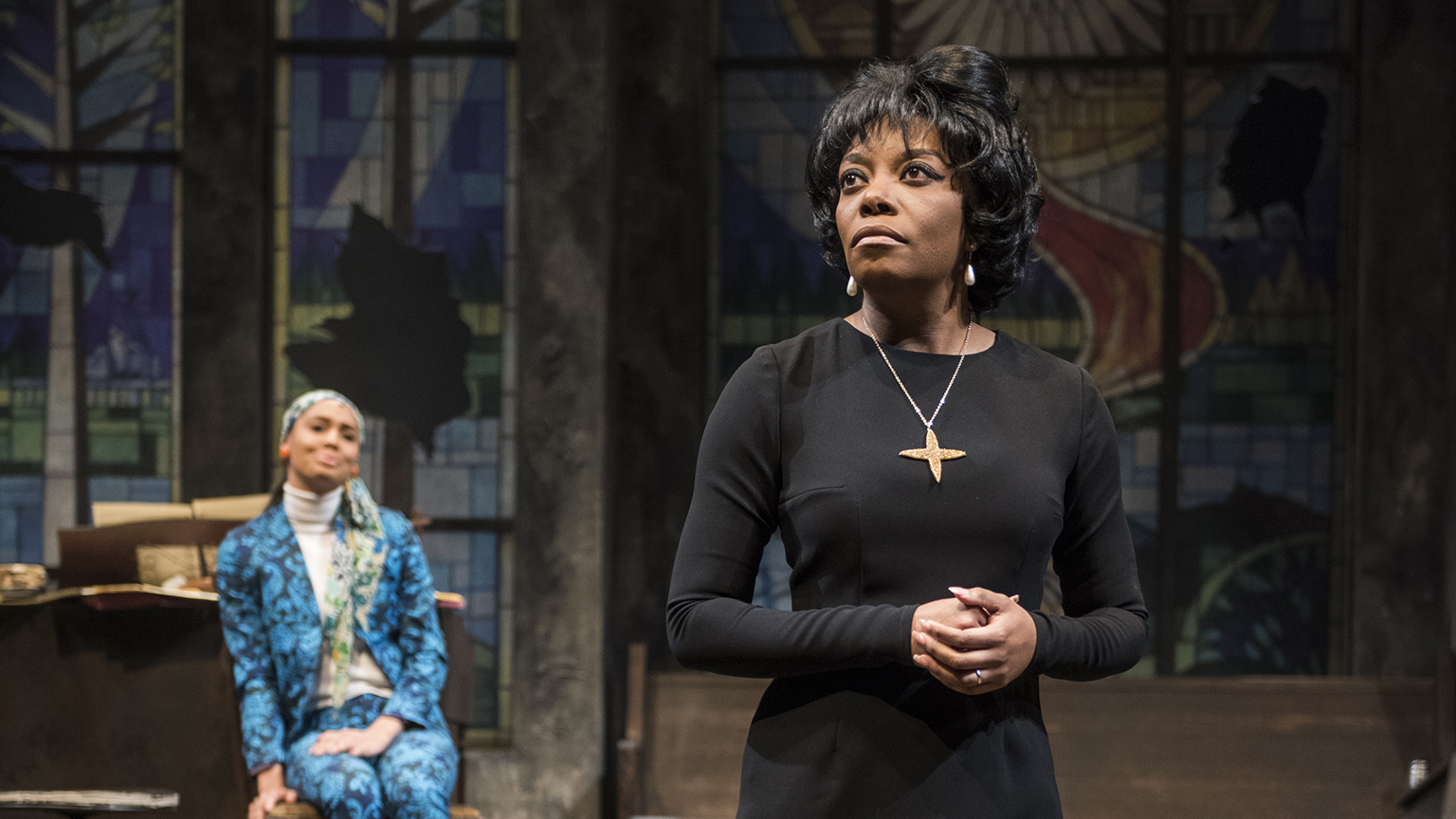 Forget the Lady Gaga remake: with Sydney Charles’ electrifying performance in the title role of “Nina Simone: Four Women,” a real star is born at Northlight Theatre. The script has as many kinks and quirks as Nina Simone’s brilliant, troubled, complicated personality. But the dozen or so songs in this play, as sung by Charles and three fellow actor-vocalists, soar above the plotless and inert framing story, bringing us face-to-face with Simone’s fiery genius as composer, singer and righteously indignant voice of the civil rights movement.

Under the flowing direction of Kenneth Roberson, Charles gives us a full-force blast of Simone’s powerful sandpaper wail, her edgy, uncompromising intellect and her diva personality—she bristled at comparisons to Billie Holiday, preferring to be mentioned alongside Maria Callas—which compensated for deep-seated anxieties and insecurities. Charles acts and sings her heart out and was deservedly met with rapturous applause by the opening-night crowd.

The renditions of classics such as “Old Jim Crow,” “Sinnerman,” “To Be Young, Gifted and Black,” “Mississippi Goddam” and “Four Women” are as memorable a set of musical moments as we’re likely to experience on a local stage this year, and I suspect, and hope, they’ll lead audiences to investigate Simone’s opus on CD and YouTube. Costars Deanna Reed-Foster, Ariel Richardson and Melanie Brezill have equally rich and expressive voices, a reminder of the depth of African-American talent in the Windy City that deserves wider exposure in area theaters. As the show’s onstage pianist, Daniel Riley also deserves a shout-out, although his self-effacing presence means we miss Simone’s keyboard artistry, which rivaled her singular, bewitching voice.

In the program notes, author Christina Ham says she accepted the commission from Minnesota’s Park Square Theatre, where the play premiered in 2016, on the condition that it not be a jukebox musical. But this show would have worked better dramatically as a tune-centered revue, focusing on Simone’s mastery of the cabaret form. As it is, the dialogue is contrived and sometimes leaden, with the artist’s biography conveyed in Wikipedia-like chunks of bland exposition.

Worse, the situation on stage is confused and confusing. Set within Christopher Rhoton’s frighteningly realistic depiction of Birmingham’s Sixteenth Street Baptist Church soon after it was bombed by the Klan in 1963, killing four black girls, the play brings Simone together with pious Aunt Sarah (Reed-Foster), who cleans homes for a living; middle class, mixed-race Sephronia (Richardson), a movement organizer, and hard-drinking streetwalker Sweet Thing (Brezill). This quartet, with Simone singing the part of the embittered and tough-as-nails Peaches, constitutes the four women of the play’s anthemic title song. But do the four adult characters also represent the murdered children, whose deaths triggered Simone’s conversion from entertainer to engaged activist? There’s a suggestion that they do, but the girls’ innocence and tragically wasted potential seem worlds apart from the hardened, culturally circumscribed characters of the song. And are the three other figures on stage separate people or are they aspects of Simone’s own turbulent psyche, which harbored feelings of shame and rage and was torn between her need to be recognized as an artist and her desire to be of service to the cause?

There’s no hint of an answer to these questions in the play, which features lots of attitudinizing but little action, movement or resolution of tension. The Nina Simone we see is more icon and emblem than fleshed-out human being. Even when, in a climactic moment, Simone takes off her stylish wig to reveal her thick and kinky hair, it seems more a performative gesture than an unveiling.

What the show does have is its music: the purified essence of a life that was brave, messy, committed and unhappy. Thanks to a gifted and inspired cast, the numbers shine here like jewels in a tarnished setting. (Hugh Iglarsh)