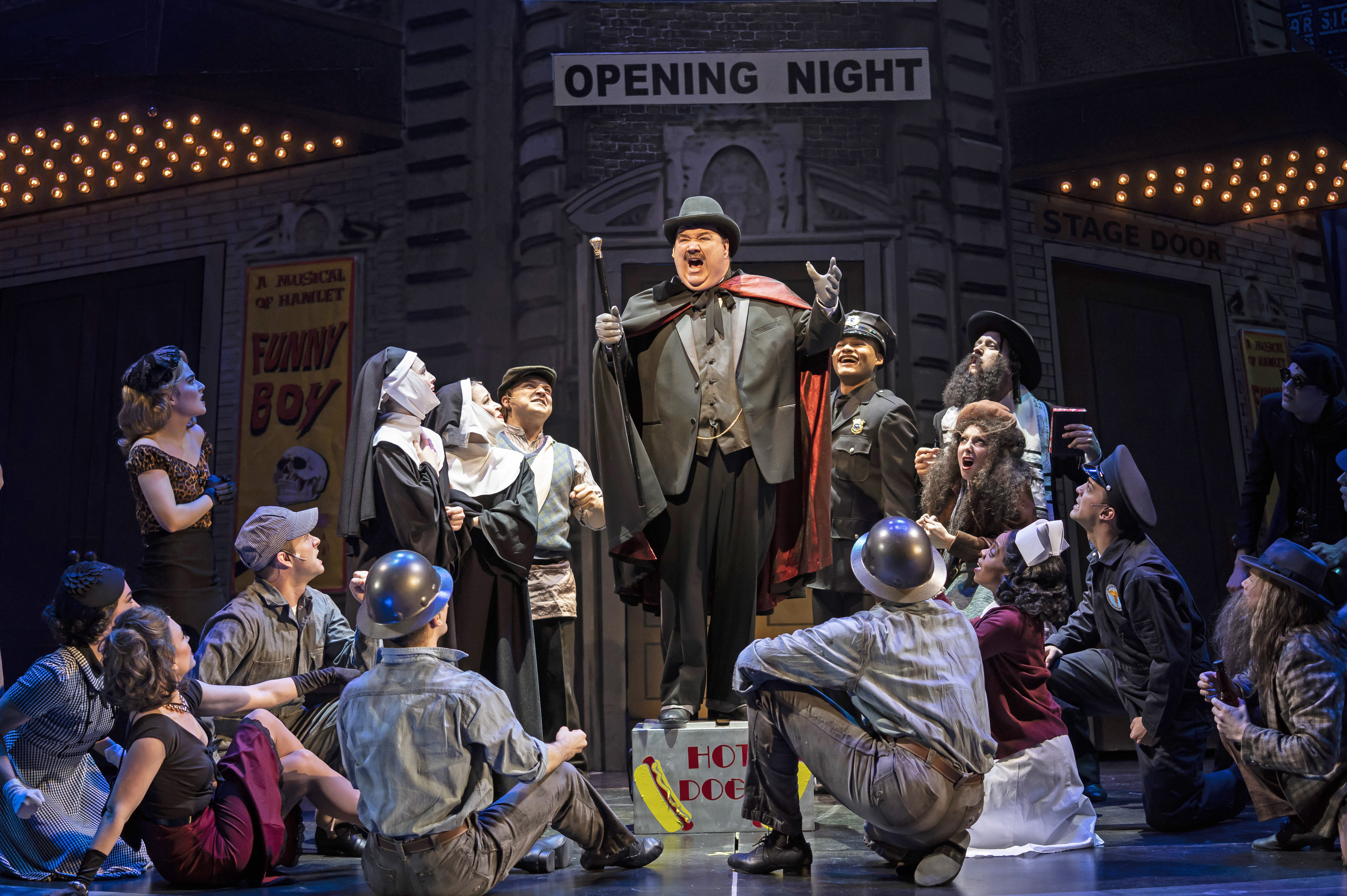 Blake Hammond (center) with the cast of “The Producers”/Photo credit: Liz Lauren

Although not yet springtime for Paramount in Aurora, their near-perfect production of the musical comedy “The Producers” is a good enough reason to make the drive.

Winner of a record twelve Tony Awards (which is, ahem, one more than “Hamilton” got), “The Producers” is based, of course, on the 1967 Mel Brooks-directed comedy, which starred the legendary Zero Mostel and the not-yet-legendary Gene Wilder. The original production of the musical featured Nathan Lane and Matthew Broderick. That type of talent, paired with the comedic genius of Mel Brooks is not easily duplicated. Director Jim Corti manages to meet and actually rise above lofty expectations by not only effectively staging a hilarious musical, but also adding little (and maybe not so little) touches, the most endearing being a humanizing kiss between two male leads.

The play begins with an over-the-hill producer, Max Bialystock (Blake Hammond), suffering yet another misstep on Broadway. This time it’s a musical version of “Hamlet” entitled “Funny Boy.” Inspired by a conversation with his timid, nervous accountant, Leo Bloom (Jake Morrissy), Max sets out to produce the worst musical possible, which, due to creative accounting, would result in a tremendous profit, so long as it closes after only one night. Leo reluctantly joins Max, and together they purchase the rights to a whimsical take on the Third Reich, “Springtime for Hitler.” Funding for the production comes primarily from a large collection of little old ladies, all smitten with the big Broadway producer.

Blake Hammond and Jake Morrissy deliver solid performances, both significantly stronger in the second act. The true strength in this production, however, is the stellar performances of the supporting cast, featuring veteran actors Ron E. Rains (the almost-definitely Nazi war criminal who penned “Springtime for Hitler”), Sean Blake (the openly gay director who ends up playing the Fuhrer with a limp-wristed “Heil!”), and Adam Fane (the director’s assistant-boyfriend), who injects the right amount of slapstick energy.

But nothing compares to the sheer spectacle of the staging of “Springtime for Hitler,” which includes dancing girls dressed in Nazi regalia with sausages and steins of beer on their head. Brenda Didier’s creative choreography is engaging and the production takes full advantage of its twenty-one piece orchestra. Altogether, this is one impressive production. (Noel Schecter)