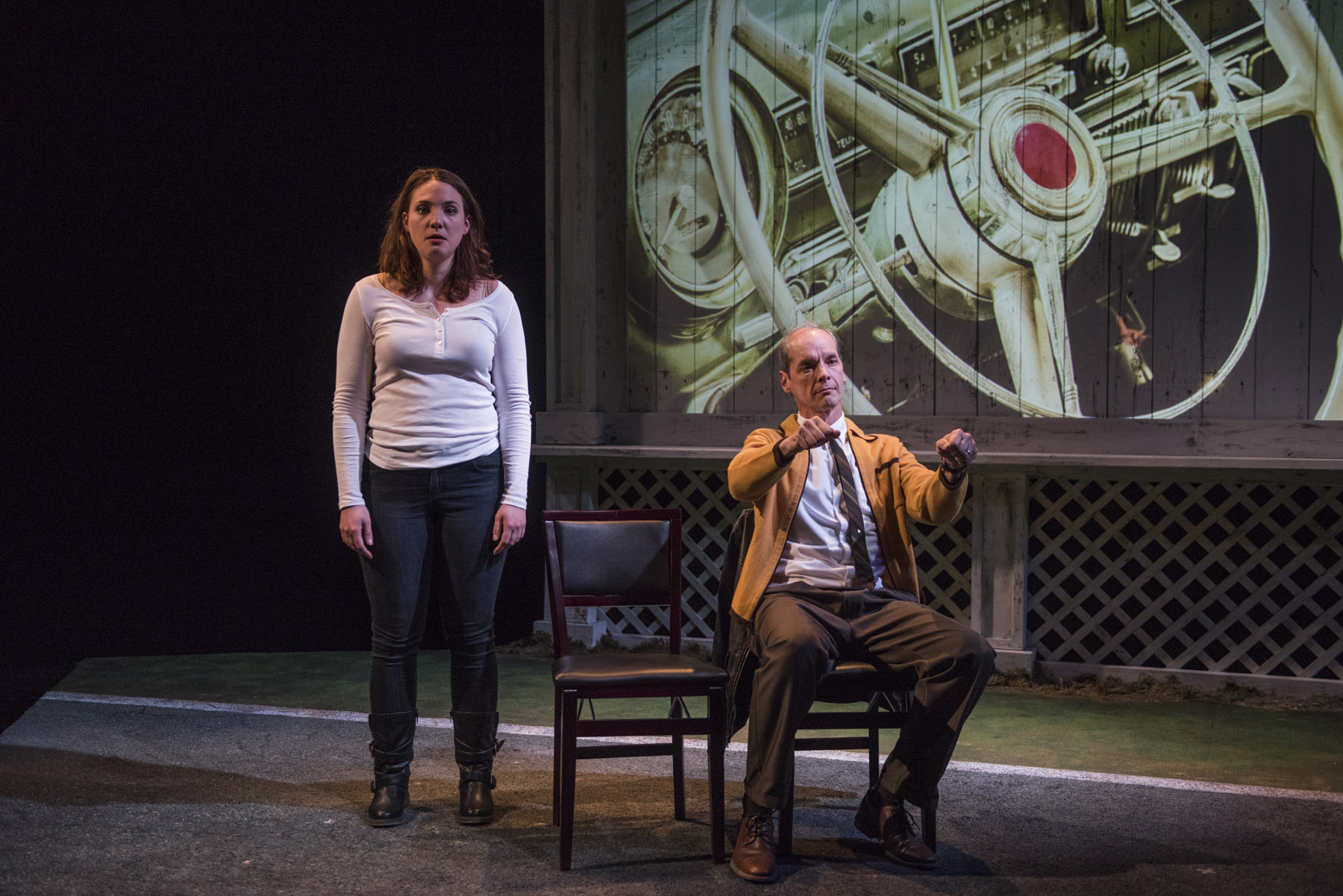 There’s a relationship on the brink of turmoil embedded in Raven Theatre’s production of “How I Learned to Drive.” Not the one between Li’l Bit (Eliza Stoughton) and her Uncle Peck (Mark Ulrich), which makes up the core of Paula Vogel’s still-resonant play. Nor the one between Li’l Bit and the rest of the men in her life. No, it’s the strained push-and-pull between the devastatingly emotional performances onstage and the larger-than-life projection design, which removes any hint of subtlety from the scenes.

Scenes of Li’l Bit and Peck driving together have a gigantic steering wheel projected above. A nerve-inducing photoshoot session has—what else—a giant camera in the background. And the climactic hotel room scene where Peck has shown up to celebrate Li’l Bit’s eighteenth birthday is undercut by the backdrop of a pile of evacuation plan maps. It can feel at times as if director Cody Estle and projections designer Tony Churchill thought we needed that little extra jumpstart to understand each scene. Some stories don’t need that explicit of a road map.

These choices are equally frustrating in moments where the projections work in the play’s favor. Many scenes are supplemented with fifties- and sixties-era billboard ads for cars, cigarettes or alcohol, usually an ad that uses female sexuality in an exploitative manner. In these moments you can see where Estle’s production could have really shone, using design elements to create an aesthetically coherent, hard-hitting commentary on the material.

The physical landscape of Li’l Bit’s memory is arguably the bread-and-butter of what makes Vogel’s play tick. This is, for all intents and purposes, a memory play, shifting back-and-forth in Li’l Bit’s mind, giving us a sense of how her relationship with Peck and the toxic masculine influences of her upbringing shaped the person she is today. Li’l Bit is crafting this world for us, and moments where the world is too overt in its presentation are in danger of removing us emotionally from the world.

All that being said, Vogel’s script holds up remarkably well over two decades since its original staging. Within our contemporary culture that is, thankfully, a lot more open to hearing and recognizing stories of sexual assault and coercion, there is a lot to ponder in the strangely complex and nuanced relationship built between Li’l Bit and Peck, especially in Stoughton and Ulrich’s onstage relationship. Stoughton is especially noteworthy, navigating a range of ages in a short amount of time, all filled with a palpable truth and heartbreak. Her performance is worth the price of admission.

Estle’s work with this cast is the true strength of this production, creating a sense of unity and clarity in the tight-knit ensemble. Kathryn Acosta is a scene-stealer navigating multiple women in Li’l Bit’s life. Their storytelling is emotionally resonant and exists as the heart of this “Drive.” If only there wasn’t the constant impulse to shine a light on an image we can already see, clear as day. (Ben Kaye)