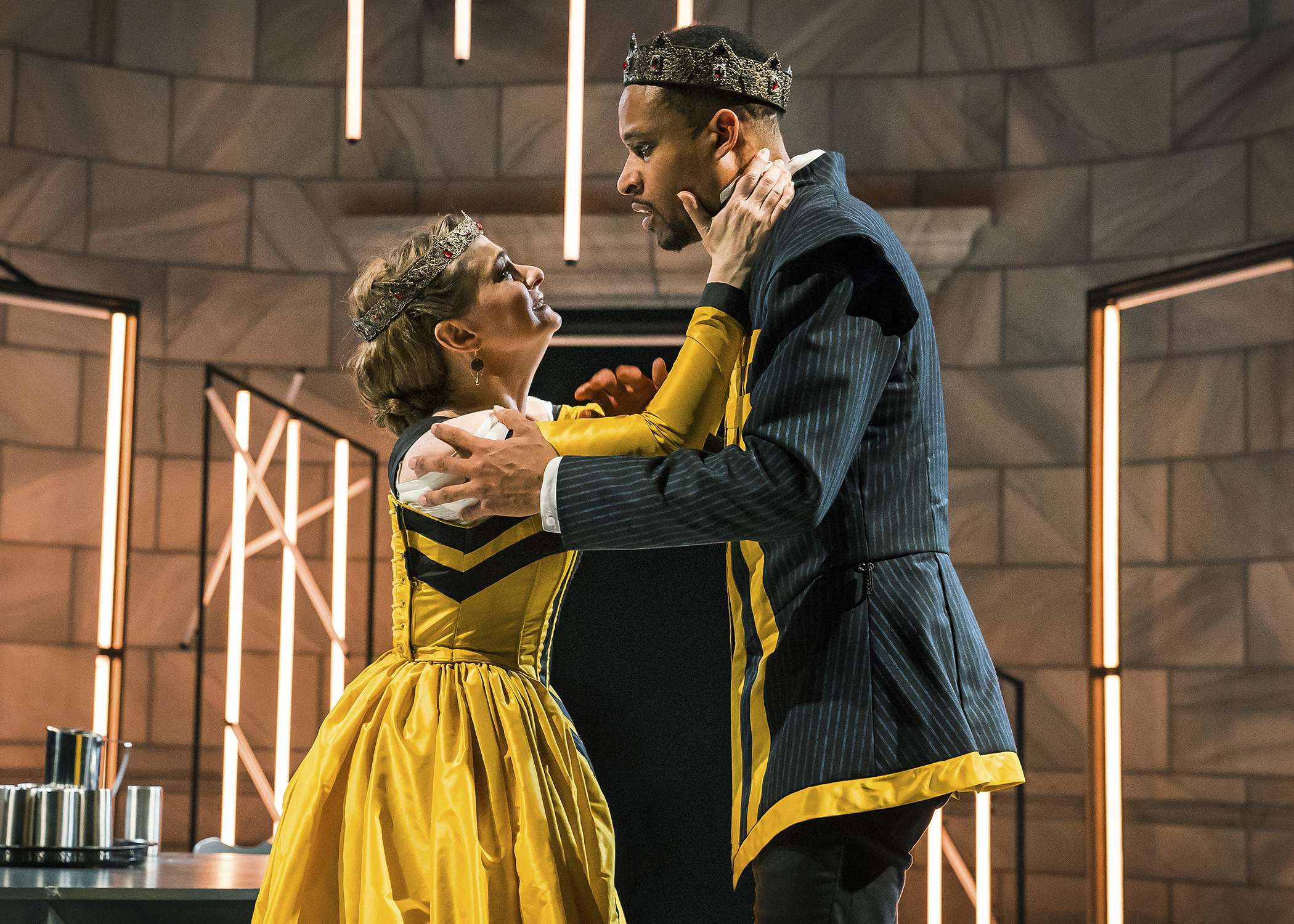 For fans of director Marti Lyons, “The Favourite”—Yorgos Lanthimos’ cinematic answer to the question, “What if Stanley Kubrick cared about the inner lives of women?”—served as a neat placeholder between opportunities to witness her most recent local productions: Jen Silverman’s “Witch” at Writers Theatre, one of the artistic high-water marks of 2018, and Chicago Shakespeare Theater’s latest Short Shakespeare! entry, “Macbeth.”  Stylistic and thematic symmetries emerge, from anachronistic idiosyncrasies (at one point Eric Parks’ Banquo offers a perfectly timed “Whaaaaat?” as if he was auditioning for a T-Mobile commercial) in period settings, to complex, nuanced portrayals of femme fury. Although perhaps the most immediately identifiable similarity is this production’s pressing concern with the present, as it is hedged ever closer on all sides by eternity.

Lyons wastes no time in this airtight abridgment. The opening scene (choreographed by Erin Kilmurray, Flyest of Honeys) finds the three Weyard Sisters (Caroline Chu, Emma Ladji, Caitlan Taylor) moving in tight, unnerving synchronicity to jagged synths (courtesy the musical wunderkind Mikhail Fiksel) while Paul Toben’s fluorescent light design pulses and shifts, with Mieka van der Ploeg’s leather and lace costumes and Richard Jarvie’s bold makeup design completing the aesthetic vision. The whole thing is vividly nightmarish and infectious; I found myself fondly remembering the time I saw The Knife in concert. Plot is folded into movement with an ease that belies exhausting hours of fight calls. Chicago Shakes got their money’s worth from Matt Hawkins.

The production is not just a technical marvel, although it is that for sure. It is also dramatically steely and sharp, the kind of Shakespeare that will have you setting aside your preconceived notions of what you think Shakespeare is and embracing the coulds and cans of imagination. Lyons has an uncanny ability to push beyond good directing and good acting into a sublime storytelling realm, which pairs especially effectively with Shakespeare. I was lucky enough to see a midweek matinee alongside five-hundred CPS students, and was treated to an opening speech by cast member Cage Sebastian Pierre, who encouraged us to follow the emotion of the scenes rather than the words, suggesting that seeing Shakespeare was more like listening to music than reading a book. Despite being the poster ghost for the highest of literary brows, this advice (offered between support for verbal reactions and reminders to turn off smartphones) indicates that Shakespeare’s relevance goes beyond contemporary threads and into something thicker about how we tell and engage with stories, about who we see when we look out and who we are when we look back in.

And with that we were transported to an impossible Scotland, of yore and morrow simultaneously. Ruthlessly and efficiently cut, this “Macbeth” hits its iconic lines in stride though new ones stood out to me this time around. “A country almost afraid to know itself,” a character diagnoses of Scotland; meanwhile, in the present tense of history, our president declares a state of emergency over a seriously misrepresented humanitarian crisis. Later still I found myself breathless during Amir Abdullah’s performance of the climactic “Tomorrow” monologue, Macbeth’s grief so palpable that it became like a physical presence in the room. Indeed, the mark of good Shakespeare (and this is very good Shakespeare) is the urgency of the emotion. As one cast member noted during the post-show talkback, Shakespeare’s work was never meant to be read. It was meant to be seen, heard and felt. For a scribe whose writing has been endlessly analyzed, there is simply no substitute for the word made flesh. And at $22 a head (for those under eighteen), Chicago Shakes is making a good-faith effort to promote that profound transubstantiation with accessibility in mind.

Aimed at capturing the attentions of young audiences, this production, in addition to being a directorial and acting masterclass and exhibiting the kind of professionalism one reasonably expects when entering into Chicago Shakes’ ever-evolving campus at Navy Pier, is also an example of just how the theater industry might combat accusations of irrelevance. It is not enough to continue churning out “Hamilton”s and “Dear Evan Hanson”s. Theater companies need to crucially recalibrate their programming for an audience raised on technology, whose expectations for entertainment are simply different than previous generations. There is no putting this genie back in its tablet and an obstinate attitude toward the perceived scruples of youth will only hasten a downfall more rapid than that of this play’s anti-hero. “Macbeth” is nothing if not a series of dire warnings: all our yesterdays have lighted fools the way to dusty death.

There is an encouraging lesson here: if all theater was designed to be seen by high-school students, especially those from school districts of diverse socioeconomic, racial, ethnic and religious demographics, while respecting young people’s ability to grasp complex human relationships and social context and nurturing their innate curiosity, which eagerly grabs the baton of knowledge at the limits of their experience, then the whole industry might be infinitely improved. Someone tell the Macbeths of the world, with their vaunted and vaulting ambition, that tomorrow need not be so dreary and dreamless. (Kevin Greene)