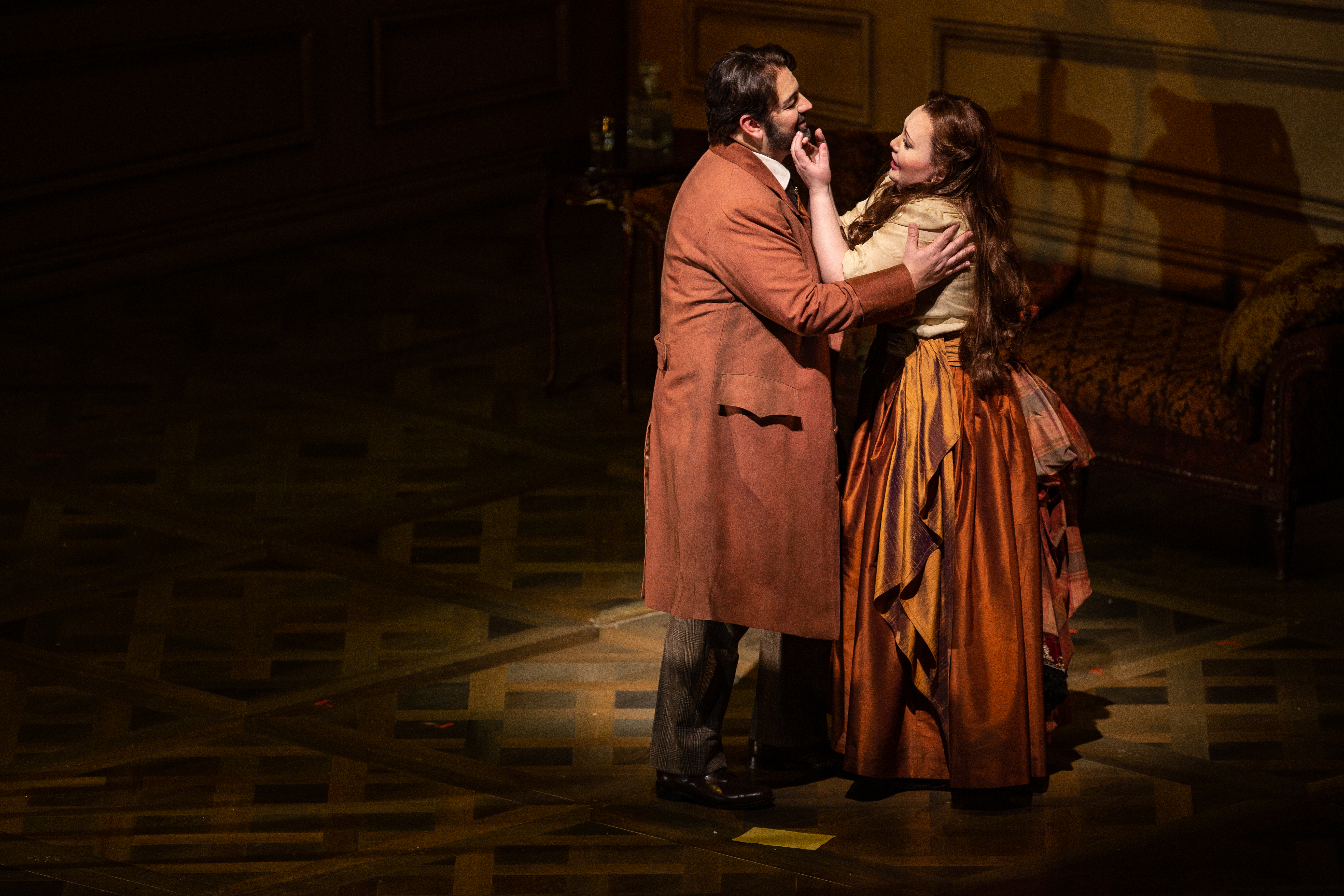 A dim figure seated behind a lace scrim rises, collapses to the floor, and crawls to her feet before a mirror, where a servant anchors her into the stable silhouette of a silk gown. The raked stage tips forward, offering a feast adorned with sartorial and gastronomical confections—costumes, croquembouches—more than you can see or eat, glittering under sepia light. The shadows of the guests multiply and tower like an army phalanx, looming menacingly behind a laughing crowd. A toast—“like champagne may you sparkle forever”—is a fervent declaration of devotion.

But we all know nothing that sparkles is forever, especially not a blazing love that precedes the first act. The guests depart, and the hostess sings her first aria: Albina Shagimuratova, with her glistening soprano clear and bright as a stream, washing away the night. I must always be free to enjoy the pleasures of life, she sings, alone in a dark room.

Verdi’s “La Traviata” tells the tragic story of the courtesan Violetta—a woman who commits, whether to pleasure or at last to love—and what happens to her in a world where nice women aren’t seen or heard at all. Lyric Opera’s lavish production, directed by Arin Arbus, shimmers between two visions: the teeming splendor where Parisian high society frolics and the private rooms where Violetta converses with her lover Alfredo (Giorgio Berrugi) or, less fun, with her lover’s disapproving father (Zeljko Lucic), who convinces Violetta to leave Alfredo in order to preserve the conferred familial honor of a daughter we never see.

Berrugi is passionate and impetuous as the youthful Alfredo, dogged by his stolid father’s cautious ideals. Shagimuratova’s voice shines across the range of Violetta’s experiences, supple and bright in merriment and romance, glowing faint as an ember as she succumbs to heartbreak and a conveniently unnamed nineteenth-century malady. What the design team—Riccardo Hernandez’s set, Cait O’Connor’s costumes and puppets, Marcus Doshi’s lights, and Christopher Ash’s projections—achieves is remarkable: a hypnotic show of light and shadow that reveals the hellish parade marching ominously alongside every human body. (Irene Hsiao)