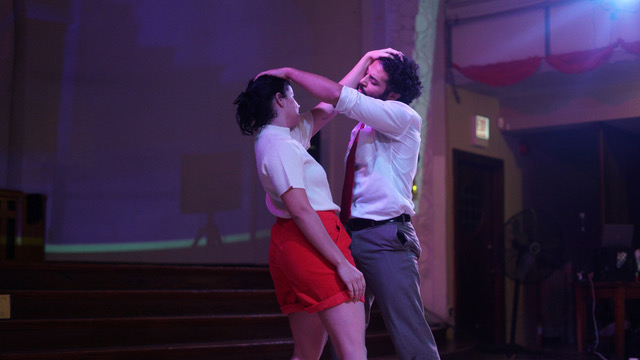 It’s happening to you right now. Whether you’re two, twenty-two or eighty, getting older is a reality that none of us can avoid.

Thanks to advancements in medicine, technology and scientific research, we may live longer than ever before, but we still grapple with the idea of what it means to be “old.” With many young people wanting to seem older and many older people wanting to seem younger, we may need to rethink our culture’s approach to aging. This is a tricky task in the storm of media and advertisements that promote anti-aging ideologies and products to help us seem older or younger or anyone but who we are. However, we can choose to look past aging’s Botox-filled face to the heart of the matter and find the valuable wisdom and enriched beauty that longevity and experience bring. We can choose to embrace getting old with a sense of grace, appreciation and some much-needed humor. But Chicago Danztheatre Ensemble’s (CDE) new work “Getting Old Sucks” does this as it takes a whole-hearted look at the ups and downs of growing older through interwoven stories about this inevitable reality that connects us all.

In the same vein as much previous CDE work, “Getting Old Sucks” is a multidisciplinary performance that addresses social issues and encourages community conversation around the chosen topics. This work incorporates dance, music, circus arts, theater and an array of visual elements to explore the aging process through individual experiences, which together offer a broad perspective making the show’s message relatable to young adult and older audiences alike.

Directed by CDE ensemble members Scott Dare and Michele Stine, the one-hour performance was collaboratively devised by an intergenerational ensemble of twelve, ranging in age from nine to sixty-eight during an eighteen-month process. The directors, both of whom also work and teach with Actors Gymnasium, collected interviews with people of varying ages about how they relate to the idea of getting older to use as fodder for the developing performance. Together with the ensemble, Dare and Stine have created an immersive performance that communicates stories which reflect a depth of human experience, from grief to glee, growing in meaning with the passing of time.

“I hope people leave the show with a new appreciation of people of different ages,”, Dare told me recently. “I think so often, especially in these super-polarized, charged times, it’s really easy to look at someone from a different generation or different geography and say, ‘You’re different and we can’t connect.’ I think this show is saying ‘You know what? We’ve all aged. We’ve all been through life. We’ve all skinned our knee. We’ve all had birthdays that we’ve celebrated alone or celebrated with family.’ That lived experience may be unique to you, but it’s also something that we’ve all been through in some way, shape or form.” Relishing this sense of connectedness makes the inevitable hardships of getting older easier to bear and the joy encountered along the way all the sweeter. (Alyssa Motter)