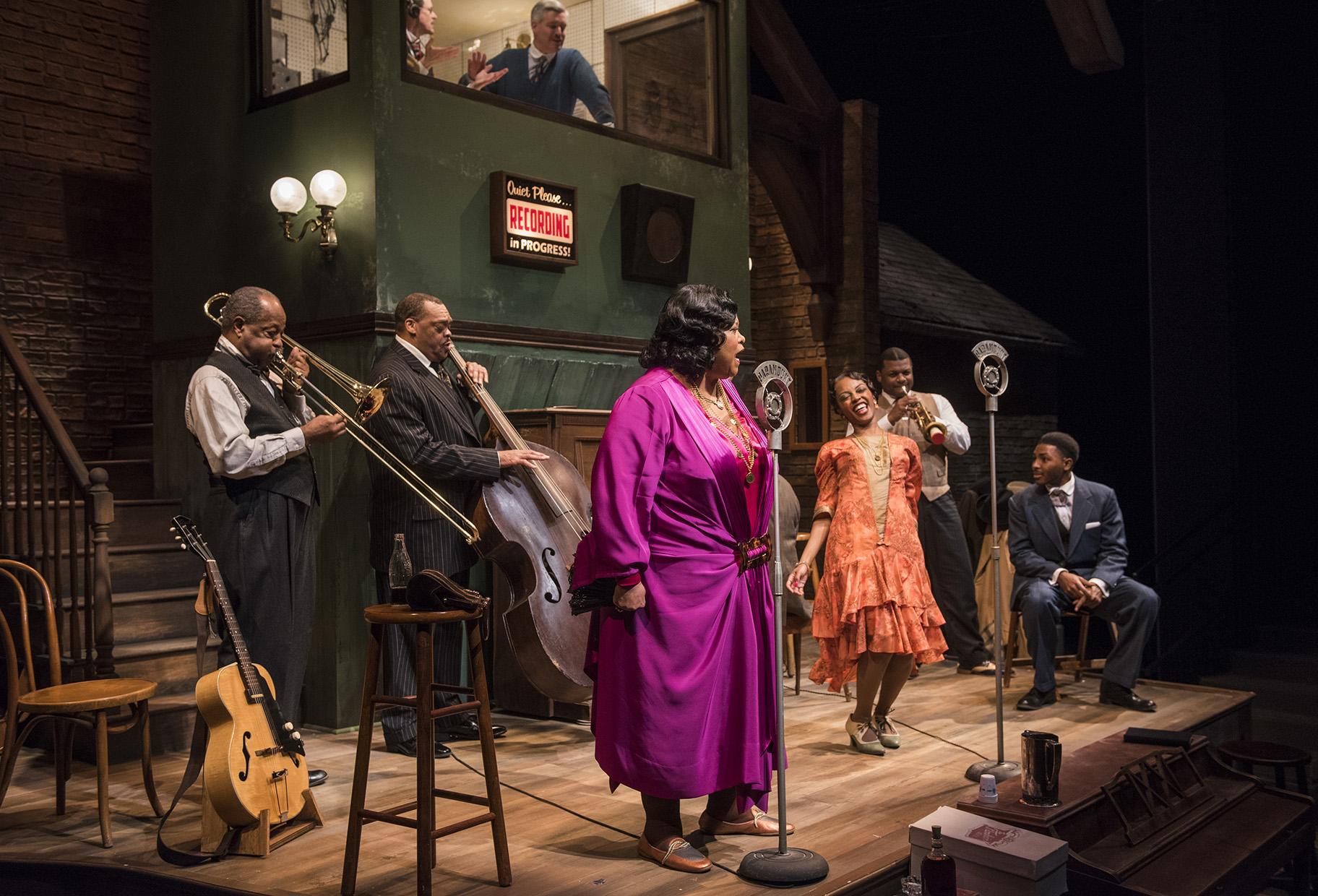 I can’t spend a whole review talking about how good a writer August Wilson is. How he’s the only close-to-naturalist playwright who sees the thread tying our world to something more vital about humanity. It’s not just that he’s an expert percussionist or biographer of the fictive. He goes beyond craft, tying sculpted, tragic psychologies to behavior and turning his characters into symbols without denying their humanity. It would be insulting to speak exclusively of that sublime writing when director Ron OJ Parson and the ensemble of “Ma Rainey’s Black Bottom” at Writers Theatre threaten to burn down the house with a fiercely balanced cast of actors.

With a ten-person cast, six of whom share substantial onstage time with another three who are not so light on development either, Parson guides a cramped stage, figuratively and literally, with big characters to grace and evenness: the Ma Rainey (Felicia P. Fields) of the title, who arrives forty minutes late to a recording session with a straggling entourage, as well as her accompanist band of punctual professionals. Parson, seasoned in Wilson’s work, is judicious and precise in his focus, orienting the audience’s eye while also knowing when to let us make our own choices. In fairness, he’s worked on “Ma Rainey” four times before. He knows the dance. Not easy, but engaging.

This is the subtle knifework of the show. The objective is clear: everybody is here to make a record and everybody will make the record. But what happens within that simple frame is brutally disastrous. The first act sets things up with banter and stories from bandmates Toledo (David Alan Anderson), Cutler (Alfred H. Wilson), Slow Drag (A.C. Smith), and crucially, Levee (Kelvin Roston, Jr.), while we watch the producer and manager set up the technical side: a collaborative environment in twenties America.

Just kidding. The tension between exploiters and exploited is palpable and they’re all lying through their teeth to get the job done and get paid. Toledo educates himself and waits for somebody to make the big move. However, the extreme positions of Levee and Ma Rainey are the points around which this show orbits. Ma Rainey gets what she wants by taking it while also building up her associates; on the other side, Levee sucks up because Levee’s got some stories.

The gravitational silences that these two hold at the end the first act implode all the build-up and chatter into a dense sphere of unstable energy, which ruptures, gloriously and terribly, during the final nauseating moments of the show. Notably, lighting designer Jared Gooding’s gentle punctuation and toning occasionally reaches into expressionism.

Aside from Wilson’s tendency to roll into toxic masculine hyperbole to speak on submission and the fact that his cast is predominantly made up of men, the work works. What the ensemble does here is something that few character actors can claim: these people are living and breathing myths. (Jay Van Ort)