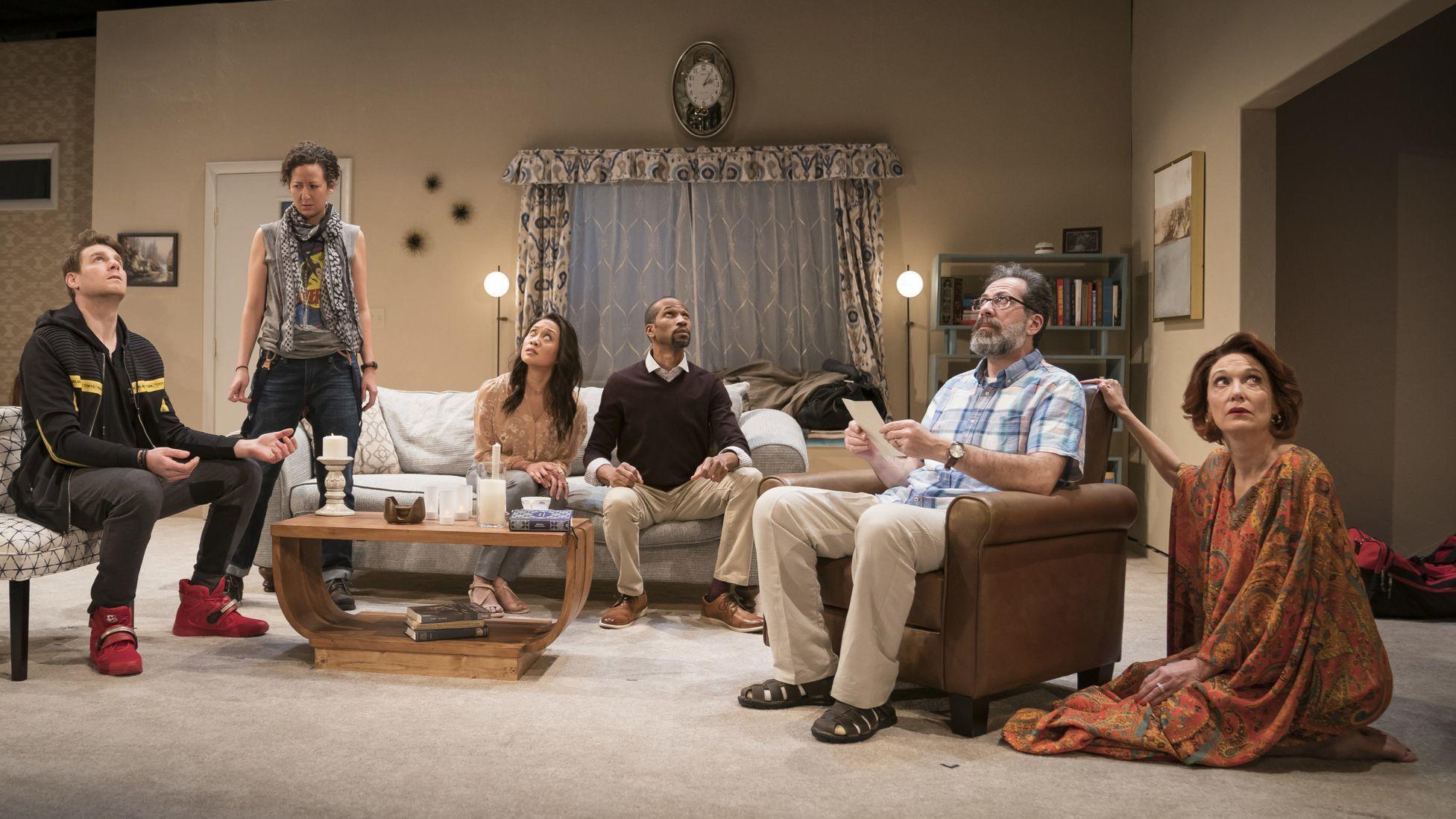 It’s Friday the 13th, April 2029, and an asteroid named after the Egyptian snake god Apophis has missed colliding with the Earth by a narrow margin of 19,000 miles. Safe in their home, still furnished with a hodgepodge of twentieth-century relics, an unnamed couple lives alone in the desert. Travel pods have been invented, but trains still run past on tracks first laid down nearly two centuries before, and the people of this house prefer books and the radio. Humans like to cling to old ideas, like God. When their three children come for a visit, all heck breaks loose. Middle (Anthony Irons) brings his fiancée (Emjoy Gavino) home for the first time. Eldest (Kristina Valada-Viars) is atheist and gay, and her parents are fundamentalists. Mother (Shannon Cochran) is consumed with regret for missed opportunities. Plus God appears to have invited themself to dinner.

Any one of those subplots could have provided the material for an evening but Lookingglass ensemble member Kareem Bandealy’s first play, “Act(s) of God” (directed by Heidi Stillman), combines them all into a jumble of sci-fi, drama, comedy and absurdity. For the first two acts, it works wonderfully well. Bandealy has a handy way with dialogue that makes this family’s bickering hilariously believable (“I’m the first woman in his life,” announces Mother to hapless Fiancée), sometimes painfully so (“[Motherhood] doesn’t just wreck your body. It wrecks your entirety”). The way each act closes is about as perfect as theatrical punctuation gets: Mother gets a show-stopping aria (never have the words “a travel agent” been sung with such conviction). A fight scene straight out of Genesis gets the siblings in an impressive tangle.

But then, the third act reverts to what appears to be the staging of an acting workshop. Earlier lapses into meta-theatrical commentary are cute, and it’s understandable that Bandealy, as the player-as-playwright, might turn to theater as the main metaphor, the Bard himself did it, after all. But to devote a whole act to it feels like a copout, the theatrical equivalent of “And it was all a dream,” which dismantles all the stakes Bandealy set up before.

The ensemble is excellent. Cochran is especially unforgettable as Mother, vibrating with frustration, swanning in paisley caftans like a disgruntled diva. (Irene Hsiao)