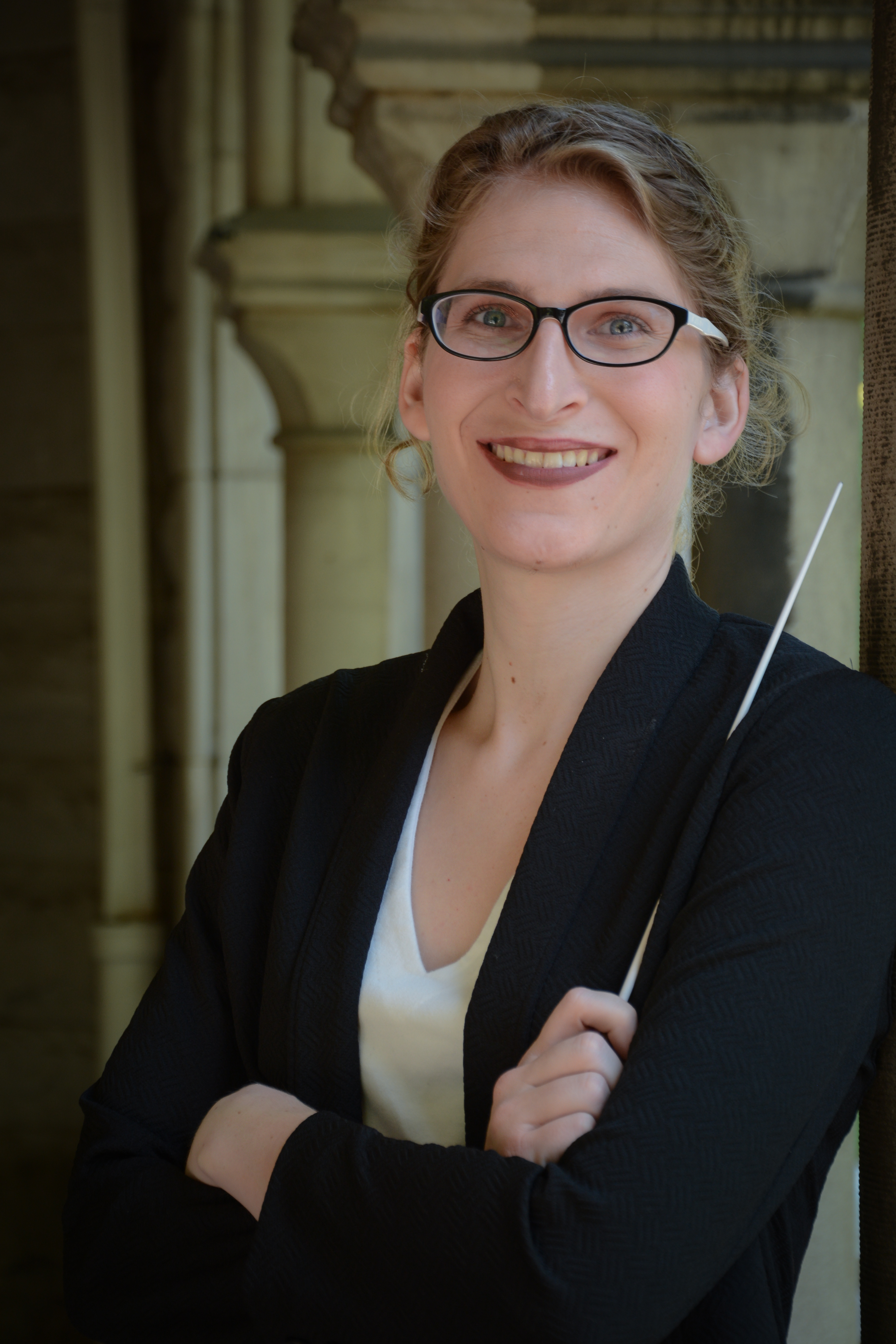 The roster of opera conductors was once made up almost entirely of heterosexual, white men of a certain age. But the profession is climbing toward greater equilibrium. LGBTQ+ musicians, people of color, women and younger conductors are stepping up on the podium and speaking our shared tales with all the strength of their understanding and personality. The transgender community is only beginning to have a seat at the table: if you Google the words trans, orchestra and conductor, the first results will be for Trans-Siberian Orchestra.

Enter Alexandra Enyart, a trans woman, orchestral and opera conductor who is taking Chicago’s classical music community by storm. Chicago Classical Review noted of one of her performances, “Enyart led the music with confidence and flexible pacing that was always in synch with the singers.” Chicago Theatre and Concert Reviews wrote:

“Enough cannot be said of the superior musical direction and conducting of Alexandra Enyart. In only a short time in Chicago, she has shot to prominence in the storefront opera scene. Perched on a stool in a corner of the stage, Enyart was always present, but never obtrusive. It takes a special ear to breathe with a singer from the podium; this is not a skill that every conductor, even many who are quite successful, have in their arsenal. Enyart seems to know when a singer is going to breathe, and how much intake is needed in that slip of a moment, almost before the singer knows themselves. The audience could live fully in the world of the play, because Enyart championed her orchestra as another member of the cast, everyone breathing in, and letting go, together.”

After completing her bachelor and master’s degrees at The University of Louisville, Enyart took the position of music director of Thompson Street Opera Company, one of the leading lights of Chicago’s burgeoning storefront opera scene, and moved to Chicago.

Storefront opera uses the model created by small, non-equity theaters, with loads of sweat in lieu of funds, that put Chicago on the theatrical map. This ethic saw small coteries of passionate colleagues creating fresh theater work, in found spaces such as abandoned storefronts, with minimalist productions that were suggestive rather than explicit, and placing the audience in immediate proximity to the players, something that felt rich, honest and emotionally direct. Chicago’s young, ensemble-driven opera companies are having the same birthing, bringing contemporary work, usually in English, to audiences that either aren’t interested in or are looking for a change from the standard operatic repertoire. An audience raised on movies and television, with the faces of the performers feeling mere inches away, are aching for a new approach and for plots that more closely resemble the lives of their generation.

Thompson Street is itself a transplant from Louisville. Some of Enyart’s first professional opera-conducting gigs were on the podium for Thompson Street when it was still producing in Kentucky. A shared passion for the works of living opera composers sparked a consuming connection between Enyart and the company’s executive director, Claire DiVizio.

Enyart made an auspicious Chicago debut on the podium with Thompson Street’s production of “Cosmic Ray and the Amazing Chris“ and followed that with Chicago Fringe Opera’s production of “As One,” an exploration of the protagonist’s transition from male-presenting to her truer self. It was magical serendipity that Enyart, who could empathize with the story being told, was in the right place at the right moment.

Enyart was born in Cincinnati in 1993 and raised in tiny Alexandria, Kentucky within a musical family, where many different genres of music were explored and appreciated, and Enyart experienced what would become one of her life’s passions. Without mentors or role models presenting positively as anything other than heteronormative, any feelings of displacement that might have been bubbling under the surface remained lodged solidly in the subconscious. Enyart threw herself into the study of the clarinet. Her proficiency and talent paved the way to Louisville in 2011.

When she shared that she had an interest in conducting with her clarinet professor, he sent her to Kimcherie Lloyd, the director of Orchestral Studies and Opera Theatre at the university. Somewhere between aspiration and fate, Enyart acquired a personal and professional mentor and a new direction. “In my senior year, my clarinet teacher retired,” she says. “I was taking a conducting lesson every week, I was in the orchestra, [I was] the orchestra librarian and the orchestra manager. I was learning the things that make it all work.” Enyart completed her undergraduate degree in clarinet performance and began a master’s program in orchestra conducting in 2015, passing up other academic opportunities to stay in Louisville.

In 2014, Enyart began dating Kelsey Norris. The following year, Enyart told her she thought she might be transgender.

Then, at only twenty-three, Enyart was selected to conduct the Tomsk Philharmonic Orchestra in Siberia, Russia, a major coup for a young conductor. Enyart tells me, “I was taking hormones and was undercover when I was offered this gig. My doctor said, ‘Don’t stop taking the hormones.’” She stopped the hormone therapy and went off to Russia.

As the protégé of Lloyd, Enyart was a visible figure on campus and coming out seemed a far-off possibility. “When I told my teacher it was more like the truth just finally spilled out. It was relief more than anxiety,” Enyart recalls. After that, when the singers in “The Tender Land” were working with the stage director, they brainstormed about how Enyart would come out to the university and to an orchestra that had become a musical family.

“When it was time, I emailed all my professors, and a general email went out to the entire staff,” she says. “The next day at rehearsal, Lloyd told the orchestra. She didn’t feel it would be right for me to be in the room when the orchestra learned about my transitioning, so they would be free to have their reactions without my presence, and [their] initial reactions wouldn’t hurt me.”

The next day, Enyart returned to rehearsal. “The response that I got, the difference in sound, was so significant,” she says. “My teacher told me that all doubts evaporated the first time the orchestra made a sound when I was conducting as a trans woman. There was an openness and a comfort that came with being in front of an ensemble at my most vulnerable state, making art without barriers and connecting to people.”

Enyart’s focus is more about gratitude and healing than trauma. “I think one of the best things about being a conductor who happens to be trans is you have to learn so much about yourself at a younger age,” she explains. “You must take a huge leap. I went from being a white, cis-presenting male, which was the top of privilege, to being a trans woman. This has been a gift. I have a greater awareness of how much someone can be going through that others don’t see. I always try to carry with me a gratefulness that you can make it, find your own family, and good things happen.”

In addition to her continuing work with Chicago Sinfonietta, the trans choral ensemble ResonaTe, as well as planning a wedding with long-term partner Norris, Enyart will be on the podium again for Thompson’s spring double bill of Karen Siegel’s “The Hat” and Robin Haigh’s hysterical farce “The Man Who Woke Up” April 4 through 7 at the Athenaeum Theatre.

“I’m proud to be an artist,” she says. “Sometimes I leap off a cliff and land on the rocks and sometimes I fly.” She has this advice for singers: “Make choices, be wrong, take a leap, mess up, do your thing, that’s what is special about art: doing something, right or wrong. Courage and humility are so important; every second is an honor and a privilege.”