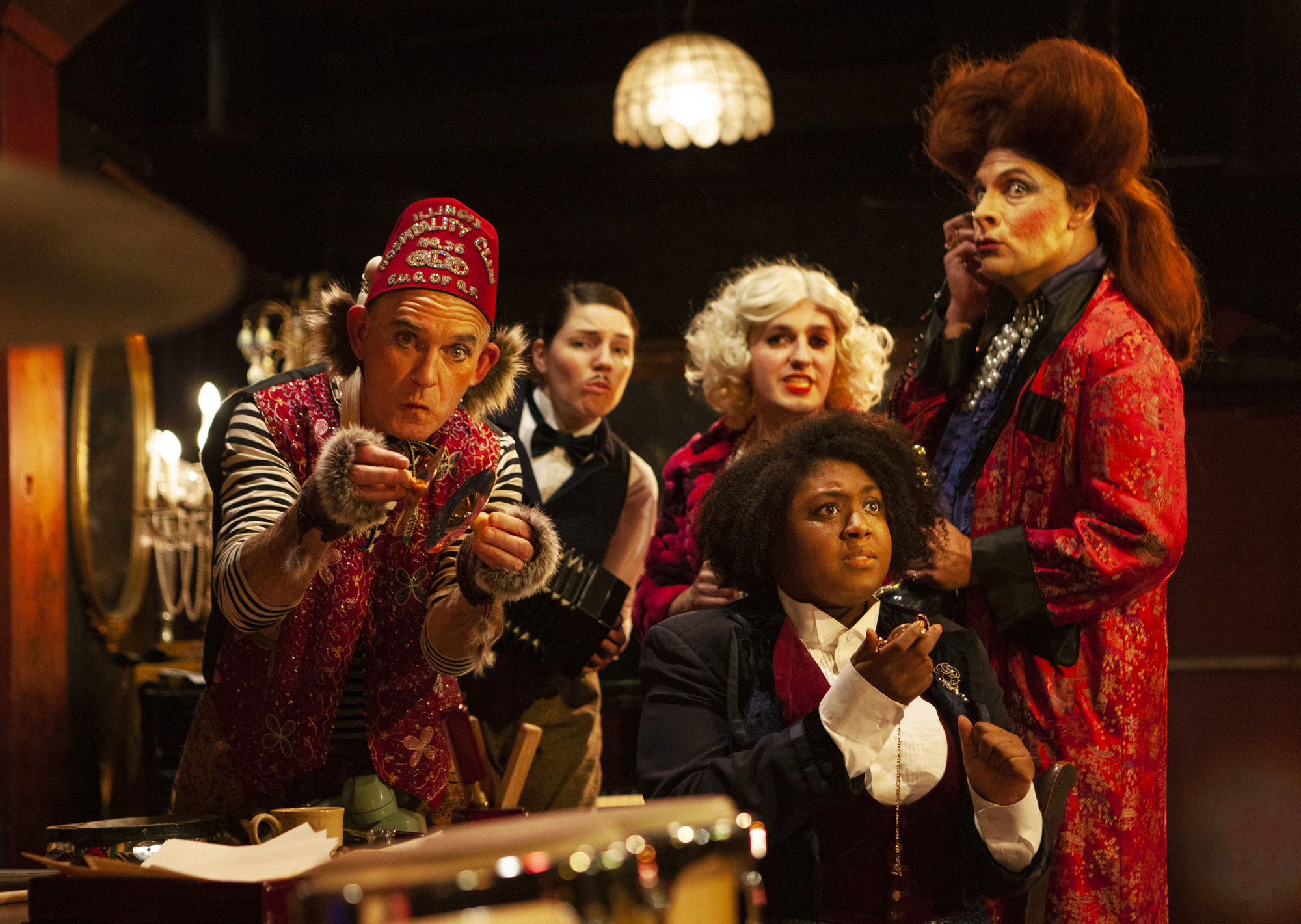 “The Ruse of Medusa,” the hour-long play with incidental music and dance authored by Erik Satie in 1913 and running at Facility Theatre, cannot be described, only experienced. The monkey-masked orchestra, the random and repetitive “plot,” the almost-but-not-quite-off-the-rails performances by the five-person cast, the sense of being pulled down the rabbit hole of free-form absurdity: it all comes together as a strange and enlivening sensation rather than a coherent thought.

Satie—remembered today for his proto-minimalist musical compositions, not his many writings—seems to have penned “Medusa” as a private entertainment to share with friends and performed in salons. He was the ultimate bohemian, working in a shabby garret so cluttered even the pianos were stacked atop each other; even this play has a jumbled-attic feel. Satie viewed the late Romanticism of his day as a symptom of the general decay and did what he could to negate it. “Medusa” came out a few years before the artistic anarchy of the Dada movement took shape in wartime Zurich. But it’s in precisely the same spirit: a frontal assault on all that was sacred in art, politics and culture.

As far as I know, the play has been staged just once in this country. No modern “Medusa” could hope to match the star power of that 1948 production at Black Mountain College, an experimental school in rural North Carolina that, for a brief and glorious moment, was the hub of the American avant-garde. It featured Buckminster Fuller as the decadent Baron Medusa, Chicago writer Isaac Rosenfeld as Polycarp, his rebellious servant, Elaine de Kooning as Frisette, his timorous daughter, and Merce Cunningham as Jonas, his “costly mechanical monkey.” John Cage accompanied on piano, Willem de Kooning designed sets with his wife, and Arthur Penn co-directed. Afterward, the evening spiraled into a bitter dispute about the relative merits of Satie and Beethoven, climaxing in a battle royale between the two factions, with one side armed with crepes suzette and the other with wienerschnitzel.

This “Medusa” may not have quite as dramatic an ending but it’s engaging in its own right. Director Dado, the veteran Chicago theater presence and resident director of the Facility Theatre, does a masterful job of reviving this rarity, managing to be faithful to both Satie’s era and our own. She understands the paradox that a work that breaks the rules must be performed with rigorous discipline, and that effective silliness needs deadpan delivery. The result is a production that is goofy and improvisational but never slack or self-conscious.

Dado makes fine use of the dimly lit and baroquely overstuffed Chopin Theatre, with its Gilded Age bordello charm. The theater features multiple performance spaces, allowing the audience—donning Satie-style bowlers and big, round glasses—to be led dancing into a back room. There, this anti-play ends with a perfect anticlimax: a sing-along version of Donna Summers hit version of Jimmy Webb’s enigmatic “MacArthur Park,” complete with disco ball and pastry treats, after which the players take their bows and the world returns to normal.

David Cerda is a wonder as the title count, a monster of unhinged patriarchal authority: large, but light and bouncy, sinister yet ingratiating, he fills the space with the epicene aristocrat’s bizarre personality. He is Ubu Roi by way of Dr. Frank-N-Furter and has more fun than the law should allow. Cerda is well matched by Taylor Galloway as his blushing, deep-voiced daughter, Brian Shaw as his fez-topped pet monkey, and Laurie Roberts as the daughter’s mustachioed fiancé.

We never discover what Baron Medusa’s ruse is or whom he’s trying to fool. It’s only in retrospect we realize that the work itself is the trap and those who try too hard to make sense of its loopy non-logic are its victims. Those interested in Dada, or theater history in general, or the bracing effect of artful surrealism at a time of real-life creeping craziness, should see this production. It is a once-in-a-lifetime opportunity and a pleasure to boot. (Hugh Iglarsh)