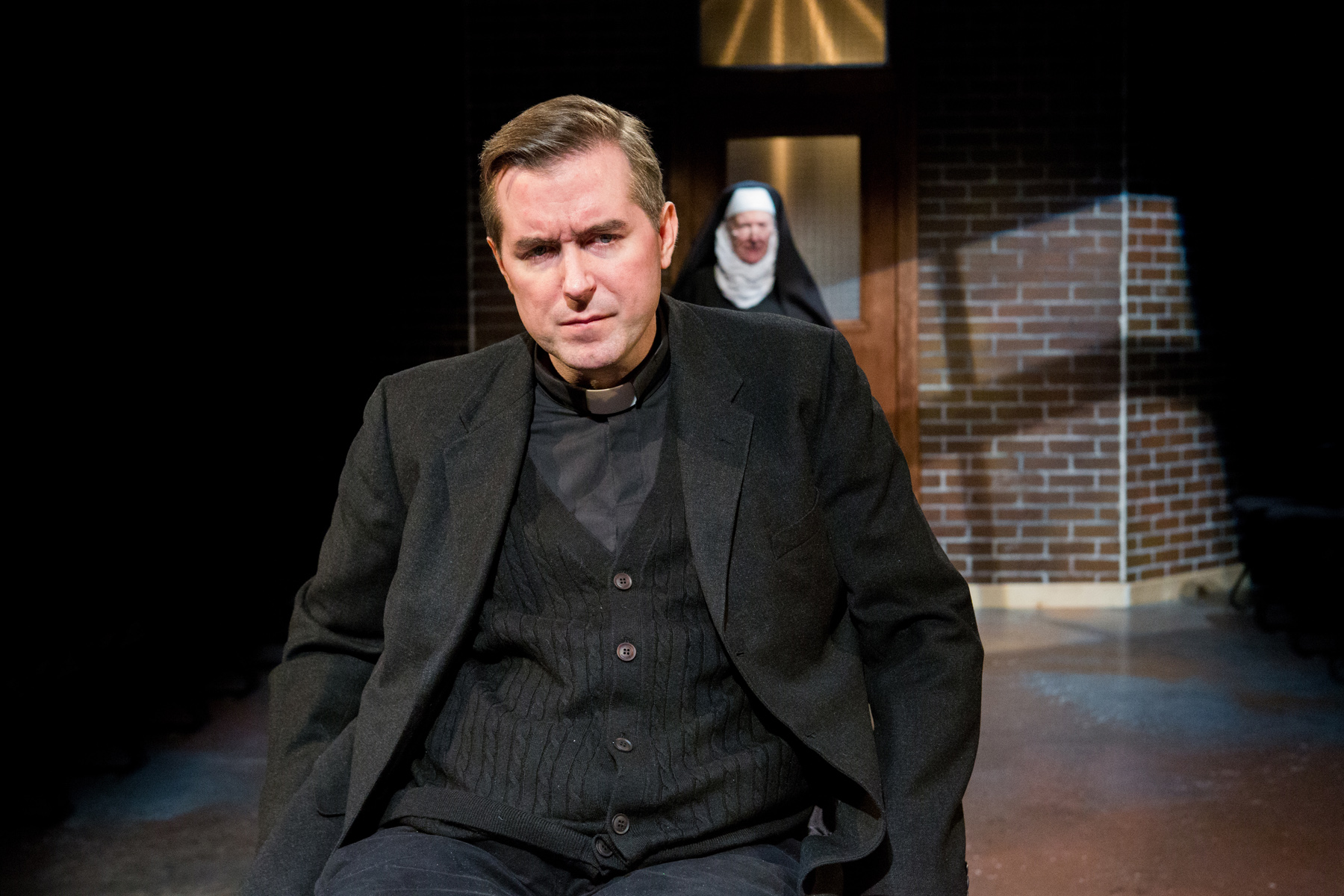 Sister Aloysius does not approve of ballpoint pens or sugar in your tea. She cautions against canonizing FDR in history class and won’t give Frosty the Snowman his moment in the Christmas pageant. She thinks boys are made of “gravel, soot and tar paper,” scoffs that “satisfaction is a vice,” and believes it is a nun’s calling to be a “fierce moral guardian,” not your friend. When a student leaves school with a nosebleed, she imagines wrongdoing. When she suspects Father Flynn of preying on St. Nicholas School’s first black student, she’s on him like a bloodhound.

The Gift Theatre’s production of John Patrick Shanley’s Pulitzer-winning “Doubt: A Parable,” directed by John Gawlik, pulls the audience onstage before a word is spoken. As you enter, you pass through a darkened corridor where flyers about community activities are pinned to the wall, and rows of candles flicker at a small altar. You walk down the center of the stage like the nave of a church to perch on risers looking down from two sides, always in plain sight, always seeing the others, and sometimes, from the sightlines, seeing them better than you can those on stage. You are the congregation and you never forget it: in a play with four characters driven by one woman’s search for the truth, the staging casts the audience as the community that judges.

It’s a fascinating choice for Shanley’s play, which delivers exactly what it claims: an ambiguous situation strained by moral tension, imperfectly viewed through the actions of flawed individuals. The casting is excellent: Michael Patrick Thornton is as personable a Father Flynn as Mary Ann Thebus is an uncompromising Sister Aloysius. Cyd Blakewell is convincingly earnest as the novice Sister James and Jennifer Glasse is a stoic mother to the unseen boy. The innocent, the right and the good wink in and out of view, unable to rest.

With a staging that is so canny about what the audience sees, it is worth wondering about the choice not to make more of elements the production requests us not to see: Thornton’s chair and Thebus’ script. A note in the program lets us know that this latter accommodation has been made because “consistent retention of the script [had become] challenging due to side-effects from medication.” The use of the script does not greatly affect the telling of the story: it is unobtrusive when, for instance, at the start of the play, Sister Aloysius takes up papers from her desk as a school principal. At other moments, one notices more. The same could be said of the wheelchair, which registers less when Father Flynn delivers a sermon and more when he coaches basketball.

There are always things we agree not to see in the theater: the wire holding the fairy in the air, the seam where the wig meets the skull, the dropped prop, the flubbed line. It’s part of the work of the theater that this place is not really this place, that person not that person. But what would it mean in the case of this play and this production, to really see it all, starkly? What if Sister Aloysius were to truly read from a book or even supertitles projected on the walls? What if Father Flynn were to let us into his mortal frailty? Father Flynn says, to open the play, “Your bond with your fellow beings was your despair.” Could it have been worth the risk to unite us in seeing rather than blindness? (Irene Hsiao)