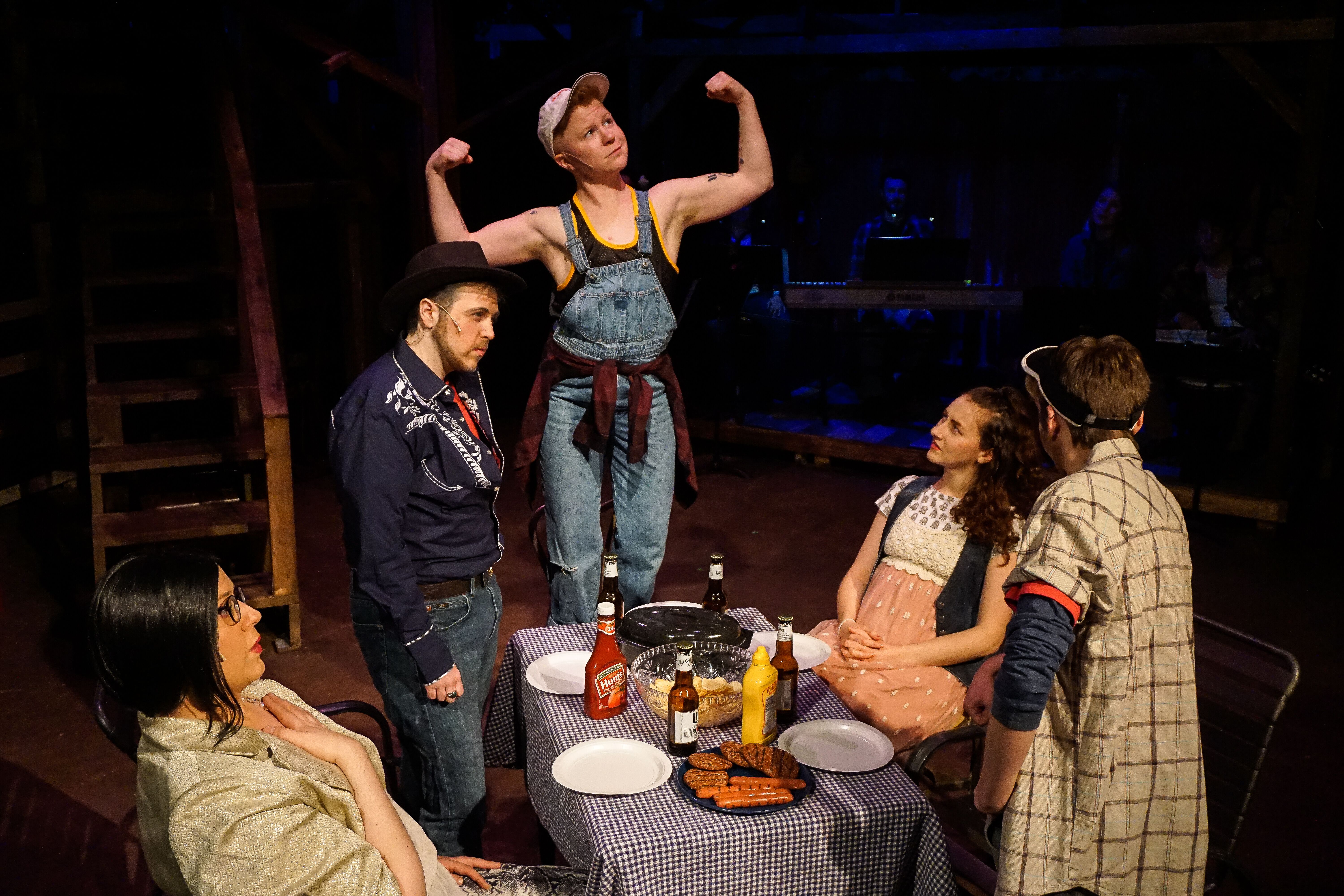 Plays about minority communities are often steeped in pain and struggle: black people fighting to gain civil rights, women striving to break the glass ceiling. In contrast, “Southern Comfort” weaves an intimate snapshot of a close-knit transgender family that is draped in beauty and flowers. Set in 1988, yet also a vision for the future, this poignant script, written by Julianne Wick Davis and Dan Collins, is amplified by a talented cast of five trans actors and features a gorgeous bluegrass score that plucks both the banjo and heart strings.

Through thoughtful storytelling and staging choices by director JD Caudill, the cis characters here gracefully play second fiddle to the starring roles. This story is not about the trans community but for them. Which is not to say that one must be a part of the community to fully enjoy “Southern Comfort”: This is a story about family.

Set deep in the heart of rural Georgia, stalwart patriarch Robert (a captivating North Homeward) finds himself in a bad way and struggles to remain a steady leader to his family during stressful times. This is Klan country and a terrifying place to be any kind of different, let alone part of a merry band of transfolx who have chosen each other as family. “Logic ain’t been on my side since the day I was born,” declares Robert, as he soldiers ahead, living his life to the fullest, unencumbered by fear.

Despite the overarching and ever-present danger of the environment, this is an intimate story that drips of optimism, a celebration of camaraderie and community. Sunday dinner is a joyous ritual with hot dogs on the grill, cold brews in the cooler, and cuisine that is unique to the South, like jello molds. What is lost in the disappointment of blood family is regained through bonds of friendship and celebrated in songs like “Chosen Family.”

Benjamin Flores and Sinclair Willman play Sam and Melanie respectively, the steady, longterm couple with the kind of love that everyone yearns for. As Robert finds that love for the first time in Lola (Kyra Leigh), Lola wrestles with the worry that she might not fit in, even in the only place that she should be able to feel comfortable. Leigh does an amazing job of communicating the complex and subtle feelings of fear and doubt even in the arms of safety. And she is a talented vocalist and pianist as well.

Lizzy Sulkowski is deliciously petulant as the rambunctious and bratty Jackson, the baby of the family. They give a heartbreaking performance of a young adult reluctant to enter adulthood, as life rapidly encroaches. Although the entire cast has exceptional comic timing, Ricki Pettinato is a highlight as Carly, bringing sass and boldness to the lives of those too used to playing it safe. Her gusto underscores the power in not being constrained by the limitations of one’s body, mind, or society’s expectations.

The cast is completed by Mario Aivazian, Taylor Dalton (in the hilarious role as an overeager customer), Justin Harner, Candice Kight and Kimberly Lawson as the storytellers and band. They serve as narrators, secondary characters and sometimes co-conspirators, egging on the cast with glee. They also fill the room with gorgeous vocal harmonies, and some of the best bluegrass you will have the pleasure to hear live onstage in Chicago. The score contains delicate melodies and witty, heartfelt lyrics. It is masterfully brought together by music director Robert Ollis.

Although there were minor snafus with volume, and the blocking could be cleaned up to avoid the sound of microphones scraping against clothing when characters hug, this is a powerful and wholesome show that touches on a wide range of complex themes from family and acceptance to identity, grief and forgiveness. When Robert tells Carly “We’re just dancing now in a day God let me borrow,” we realize that the power in this musical is in living in the moment, painting the mood of the fleeting peace we are able to find each day, if only we allow ourselves to hold onto it.

“Southern Comfort” relishes in the power of folx at last telling their own stories. “Southern Comfort” is the perfect musical to ring in the spring: it is joyful, nourishing and feels like home. (Sheri Flanders)