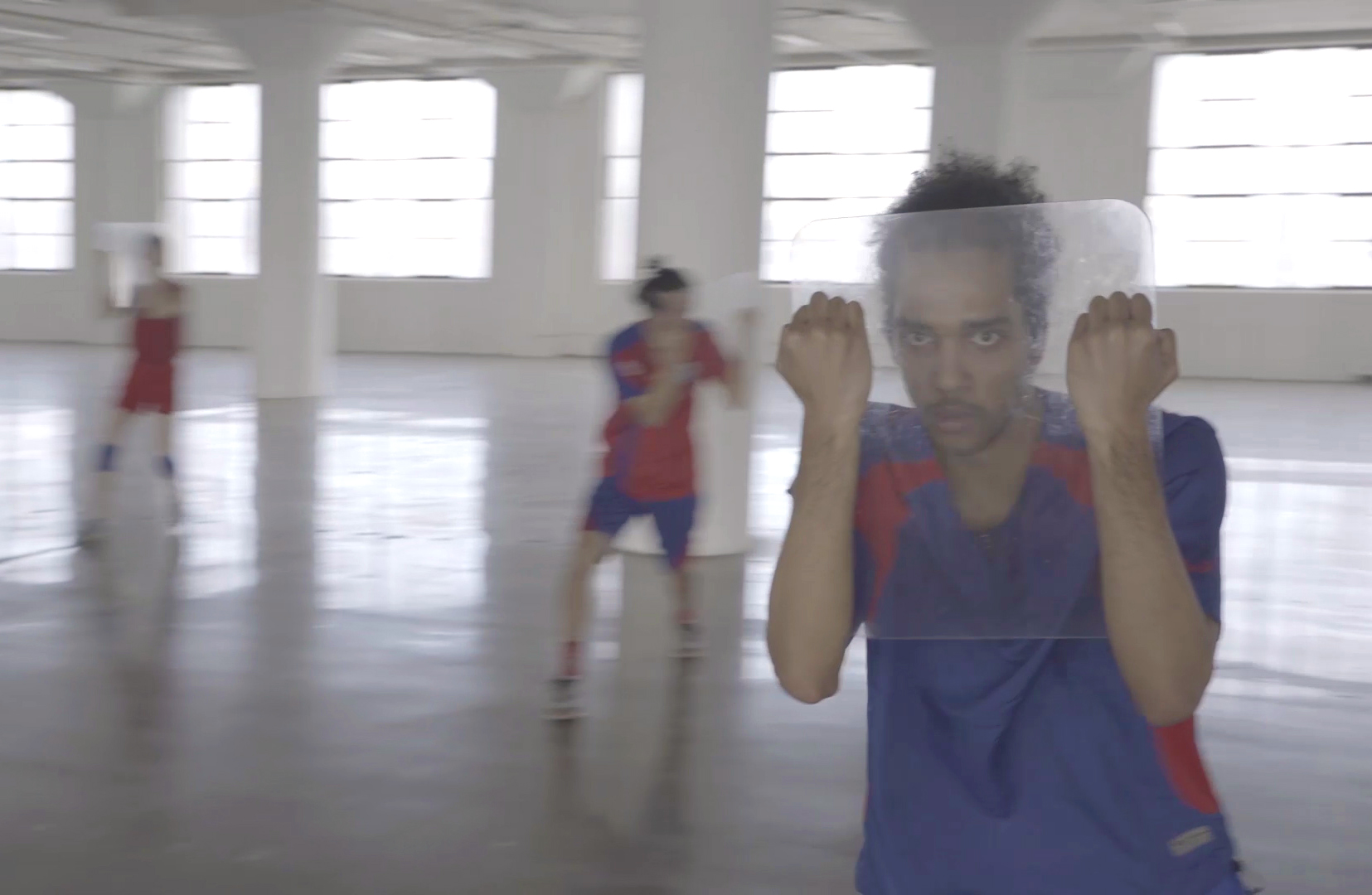 Ginger Krebs’ new dance theater piece invited the audience to watch from a lesser-used region of the brain. Fortunately, Krebs provided a cognitive warm-up; the program notes of “Escapes & Reversals” was an SAT-style analogy quiz, which attendees were invited to take once they settled into their bleacher seats in the gym of Unity Lutheran Church. The quiz, which included options like “Visibility is to democracy as mysticism is to ______ a. Google maps, b. targeted advertising, c. spyware, d. hyperobjects” and “White Elephants are to accountability as Black Lives Matter is to _________ a. ‘All lives matter,’ b. ‘I think there is blame on both sides,’ c. Youtube apology video, d. offshore tax haven,” warmed us up for a game in which the current winner is clearly the resource-controlling, narrative-owning powers that be, but the underdog team, though skittish and sustaining damage, can still reveal truth, perhaps at times with tongue in cheek… or in this case tongue silently chewed while sustaining an in-place trot for minutes on end.

Krebs and her four collaborators took the stage—the unadorned gymnasium floor with footlights running along each side—in red and blue athletic shorts and jerseys. Their movements, unique to each, included sidestepping, dodging, bouncing in a crouch then abruptly scuttling, all fight or flight physicality, performed dead-on to the audience, eyes softly fixed in the middle distance. Locomotion occurred in tiny, quick shuffling steps that, for me, created the impression of automatons, vaguely reminiscent of nineties-era video game animation. As with much of Krebs’ work, phrases repeat for long periods of time to different effect; at times repetition deconstructs movement to nonsense, as when you say a word over and over until it ceases to have meaning; at times it reveals depths within the phrase that opens worlds within a simple movement of a limb; and at times it can, if sustained long enough, through sheer will and focus, break open a moment of shared transcendence. In the case of “Escapes,” repetition and reiteration were all the more powerful considering the subjects touched: memes, video surveillance and the constellations of attendant meaning and anxiety tied to a twenty-four-hour plugged-in world in which we’re barraged by worn-out language and brutal images, and from which there seems no escape.

The video design by Christine Shallenberg, Rillan DeSalla and Chris Cameron was a highlight of the hour-long performance, a couple of well-placed moments of video projection that took up the entire back wall of the gym. Midway through the piece, the five dancers clump together around a selfie stick, mugging big smiles, their faces immense, projected on the wall behind, all the while shuffling in a small mob clockwise around the perimeter of the floor. Dancers peeled off one at a time to spin in place, then fast-shuffled to catch up with the crowd. In the penultimate section of “Escapes” a projected, far overhead drone shot of the dancers running across what appears to be a sand-processing quarry filled the back wall. In front of us, the dancers mimicked themselves in the projection, but imperfectly and slightly out of sync; life the uncanny replication of the recording. The commentary on surveillance and our response to it, that we impose on ourselves, that we surrender to, and that we don’t even know about was at once funny, pleasurable to watch and chilling. (Sharon Hoyer)