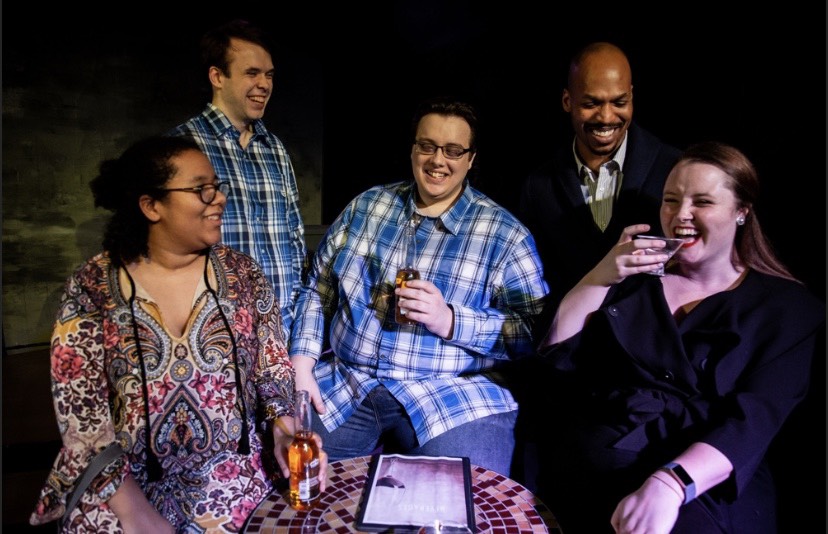 When it comes to any show, we walk in with our experience behind us. For a curvy (year removed) newlywed, a show about a woman prepping for her sister’s wedding by pushing herself to be an archetypal maid of honor is going to be littered with landmines.

“The Calorie Counters” is littered with landmines.

This is a show determined to display the errors of society’s depictions of life as a calorie-counter, but in its current form plays right into what we already know to be true. Bless Zach Tabor (Charlie) and Serina Johnston (Maggie) for illuminating their characters’ vulnerabilities as human beings at the play’s climax. That moment gives “Calorie Counters” its humanity.

From the get-go we know that the title is a play on Weight Watchers. We’ve seen the system parodied before. Lately, we have seen depictions of weight-loss successes that turn to spite (“Insatiable”) and women who embrace themselves and lead with body-positive imagery (“Shrill”).

“Calorie Counters” is full of toe-tapping songs, the collective spirit reminiscent of the body-positive messaging it’s trying to portray. The true messaging comes through when playwright Molly Wagner flexes her inspirational muscles in Maggie’s hearty monologue. For a moment, she is completely open to the audience, her soul on full display. This is the meal the play needs to be counting. This is the message we need to hear. Much of the dialogue and interpersonal moments are shallow. They could be giving us so much more to work with, as Maggie’s soul-baring moment demonstrates.

There are also moments and relationships that get lost. At one point, Charlie writes something on a piece of paper and for the rest of the show I was dying to know what it was. We never find out. It’s still killing me not to know. There are loose ends that need to be tied up. Plays can be messy, just like life, but ordinarily there are not cliffhangers at the end of a ninety-minute play.

Like the folks who flock to “Calorie Counters,” the fictional weight-loss facility, the show has a goal it strives toward. Like all good things, its potential can be met with time. (Amanda Finn)