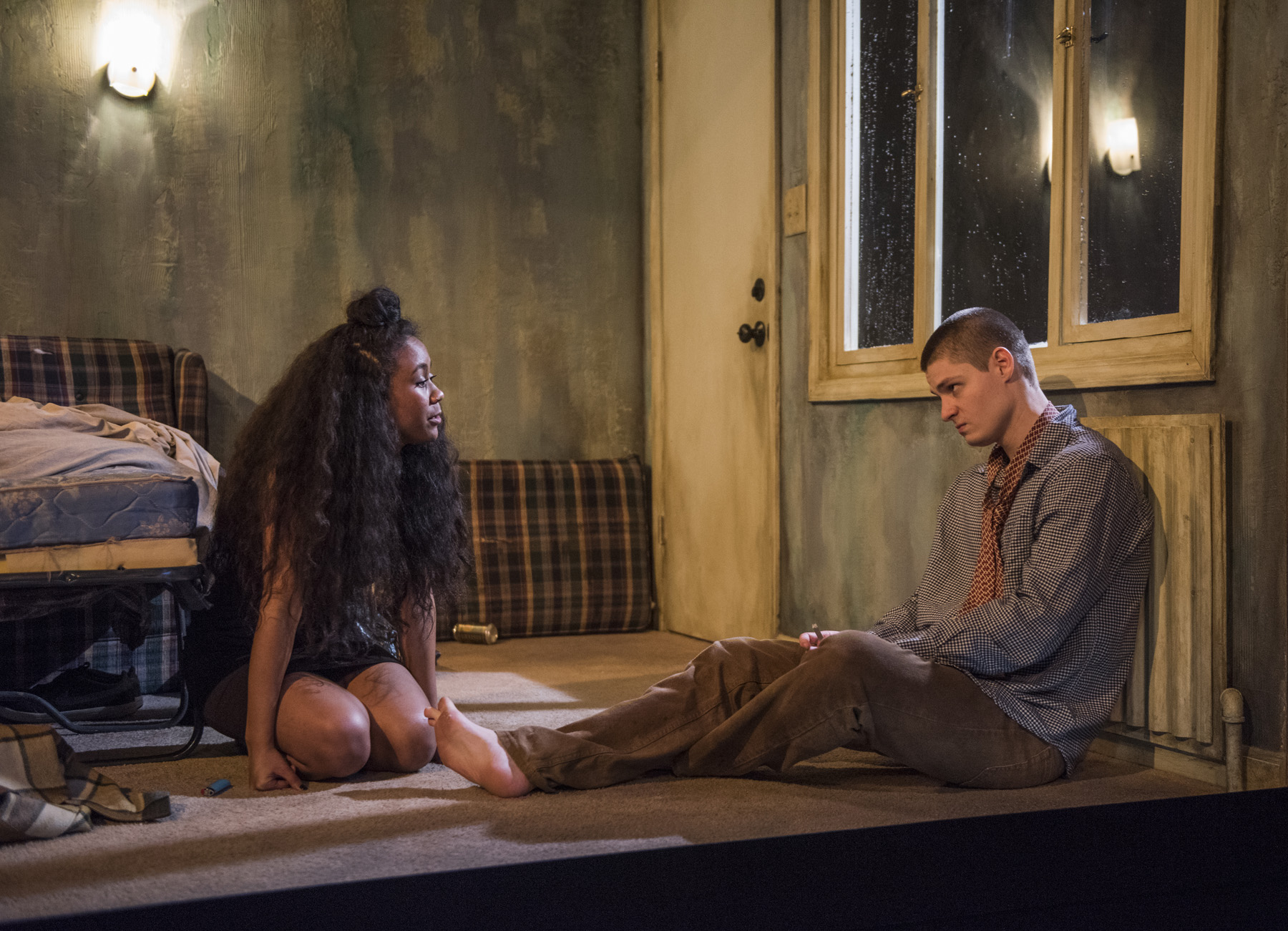 definition 1: the official currency of Japan.

definition 2: an intense craving. a desire. a longing.

Bobbie and Hench are two ugly young boys. They growl and they snarl while trapped in a box. The “box” is their flat in West London, and the growling and the snarling is the only way they know how to communicate with each other. They throw bigoted vulgarities around the room like a bouncy ball while they leap and bound off of the furniture, seamlessly throwing themselves into each other. Hench wets the bed. Bobbie masturbates in the darkness. They are as feral and carnal as the starving dog they’ve shamelessly trapped in the adjacent bedroom. At least the boys’ mother, Maggie, comes to check in on them every once in a while. The dog is left alone to wallow in his own shit.

But who is the young girl across the road, staring into their window, providing the only source of light these young boys have seen in years?

Anna Jordan’s “Yen,” fearlessly directed by Elly Green in its Chicago premiere at Raven Theatre, is not for everyone. It’s in a long line of plays that examine the toxicity of young white men through overt vulgarity, violence and brutal machismo. The works of Sam Shepard, Jez Butterworth and Lyle Kessler might come to mind during the performance. There is mention of sexual assault and violence against animals in addition to the general chaotic machinations of the unleashed id of teenage boys. But Jordan’s play has a lot more on its mind than just providing an arena for the raw, boundless performances of Jesse Aaronson and Reed Lancaster.

What separates “Yen” from previous works of toxic masculine examination lies in the character of Jennifer, the girl across the road, brought to life by Netta Walker in an unflinching performance that brings these animals down to size. While she initially comes over to take care of their dog, her presence brings a reckoning as to how maternal care (or the lack thereof) has crafted these young boys’ lives. Much can be made of the overtly physical work on display from Aaronson and Lancaster (not to mention the crass brilliance of Tiffany Bedwell’s Maggie), but Walker’s emotional catharsis and navigation of her character’s traumatic journey provide the evening’s most powerful moments, combatting the anarchic energy of Bobbie and Hench with strength, control and light. One can argue that this is Jennifer’s play more than anyone else’s. Hell, her character’s nickname is “Yen.”

To dig deeper into “Yen” would require revealing heavy spoilers, both plot and design-wise (Joe Schermoly’s scenic design is as complex as the rest of the production). Jordan doesn’t let her characters off the hook for their monstrous behavior, halting the prospect of these cycles of toxicity and violence repeating themselves in perpetuity. Whether or not you find the ending “hopeful” is another journey in itself.

The ultimate tragedy of “Yen” is that everyone here is longing for some sense of family, ultimately landing on the most foolish, destructive option of all: trying to find it in each other. (Ben Kaye)