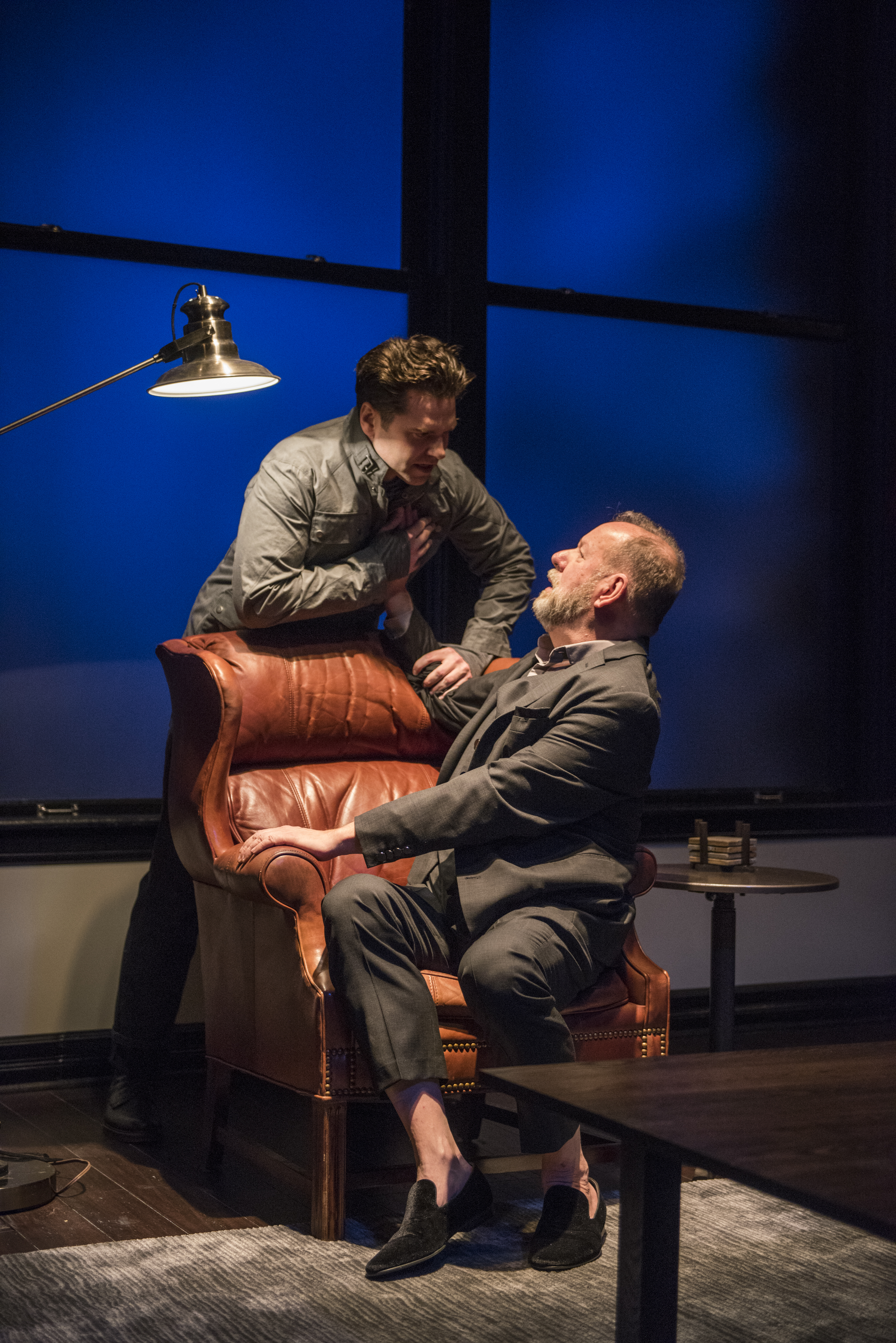 The apartment is laid out neatly. Salter (William Brown) sits in his smart brown leather chair facing some very modern furniture: a couch, two chairs, an end table, and a rather large coffee table with nearly nothing on it. Everything holds an appropriate amount of distance. That is, it is not close.

Salter is the sort to maintain distance and hold up guards. He says little, lies by omission and by fiction. He quietly allows others to assume and then nudges them back onto his proper path when they start to get off his handle. His “sons,” all played by the virtuosic Nathan Burger, however, have started to fall too far off his script.

This is the central dramatic action within Caryl Churchill’s “A Number,” at Writers Theatre: familial secrets built for the audience while judiciously withheld from Salter’s various genetic materials. We’re in a state of constant dramatic irony, slowly understanding that Salter is not to be trusted and also uncertain how many more untruths we’ve absorbed into our perceptions of the show. Onstage nothing happens, except for opaque, labyrinthian conversations about individual identity and the faults of our fathers. Offstage, things fall apart.

At sixty-five minutes, it’s a tough nugget of a play, especially considering the casting requirement of one actor playing three vitally different roles. Burger handles Churchill’s text with an understanding of every interruption and run-on thought. He kills with some scenery-chewing performances. Brown, on the other hand, never quite grasps the playwright’s words sufficiently to turn his character into anything other than a quiet, failing patriarch.

This gap between the two actors is enough to break any sense of tension, leaving us with an oddly imbalanced forty minutes that director Robin Witt never brings to a heightened state. Their drama isn’t tied into our questions, nor does it grant a point of entry more meaningful than the obtuse emotional logic of the characters’ abuses.

It’s vaguely interesting in the way a crossword puzzle is. And while Churchill’s script is a shadowy and literary piece of theater, the show’s theatrical and narrative meandering feels pointless. We could walk out to the lobby, have a conversation and be happy. As the show winds down and the conflict abates, Salter presses his last relation, an illegitimate clone of his son (again, Burger), who responds with a figure: we share roughly thirty percent of our DNA with lettuce.

“I love about the lettuce,” the clone says, blissfully drifting away on the moment, subverting the vagueness of the rest of the show with a distinct purpose: to find the moments of joy where we drop our questions and just live without want. (Jay Van Ort)