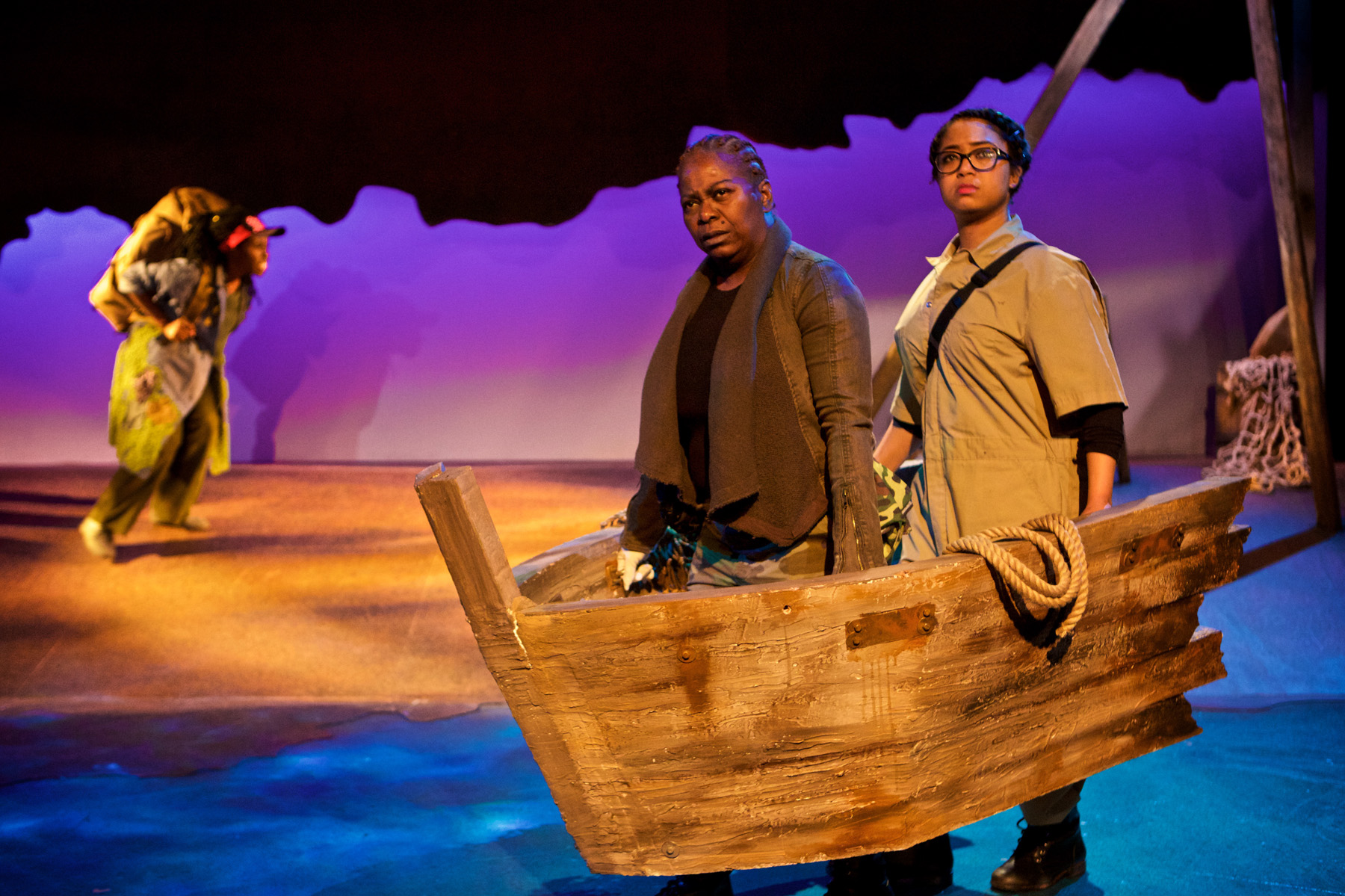 “Everything is filled with expectation at the end of the story,” Brittani Yawn utters near the conclusion of “The Ridiculous Darkness,” Wolfram Lotz’s contemporary German hit, making its Midwest premiere with Sideshow Theatre Company. With this line, our emotional state has been encapsulated. The characters onstage have reached the conclusion of their military mission and we, the audience, with bated breath, are collectively wondering, without words at all: now what?

The answer that the play provides is, ultimately, why I must wholeheartedly recommend director Ian Damont Martin’s bold, eclectic, frustrating, rambling, mesmerizing and altogether scattered production. Within a show filled with theatrical experimentation of varying success, the final moments provide a powerful and moving answer to a question that the rest of the production isn’t sure whether it’s asking.

Some background: Lotz’s script (translated by Daniel Brunet) began life as a radio play, which the German scribe has given theater companies that most gracious of gifts: the chance to make it their own by granting artists the opportunity to adapt and change his text as needed from production to production, as he explained in an interview a few years ago.

Martin and his team have done Lotz proud, intensely grappling with how this text—a contemporary spin on “Heart of Darkness” and “Apocalypse Now,” juxtaposed with present-day military occupations—intersects with systemized racism in our military and police force. Some of the more contemporary utterances and references throughout, one gathers, are unique to this production and provide a sense of immediacy that make the play seem as vital as possible.

Lotz’s script has a grand episodic nature, following the journey of Sergeant Oliver Pellner (a fiery RjW Mays) and his sidekick, Stefan (the brilliant Brittani Yawn), on a top-secret wartime mission in a foreign nation. The fragmented nature of the narrative means that your engagement and enjoyment may vary from scene to scene. This is especially true of the play’s prologue of sorts, brilliantly performed by Meagan Dilworth, but the payoff to which arrives far too late in the story.

The general narrative is also spliced with two dance sequences, with evocative choreography by Tuesdai B. Perry, the second of which provides a hint of the production’s larger themes, although it comes off more as a spoiler of the show’s thesis statement than a natural progression of the play’s thematic narrative. It also doesn’t help that Lauren Nigri’s scenic design, beautiful and poetic as it is, provides the actors limited physical playing space to craft the sprawling world of the wilderness through which they travel.

But that ending. Martin’s thesis statement is hammered home in a beautiful moment of technical marvel that I wouldn’t dare spoil. The journey to this thrilling conclusion is one that pays off in retrospect, but from moment-to-moment it may not be as clear as some might wish it to be. Even so, Martin’s ultimate mission as a theater-maker is clear: create work that is provocative, impassioned and absolutely necessary. (Ben Kaye)