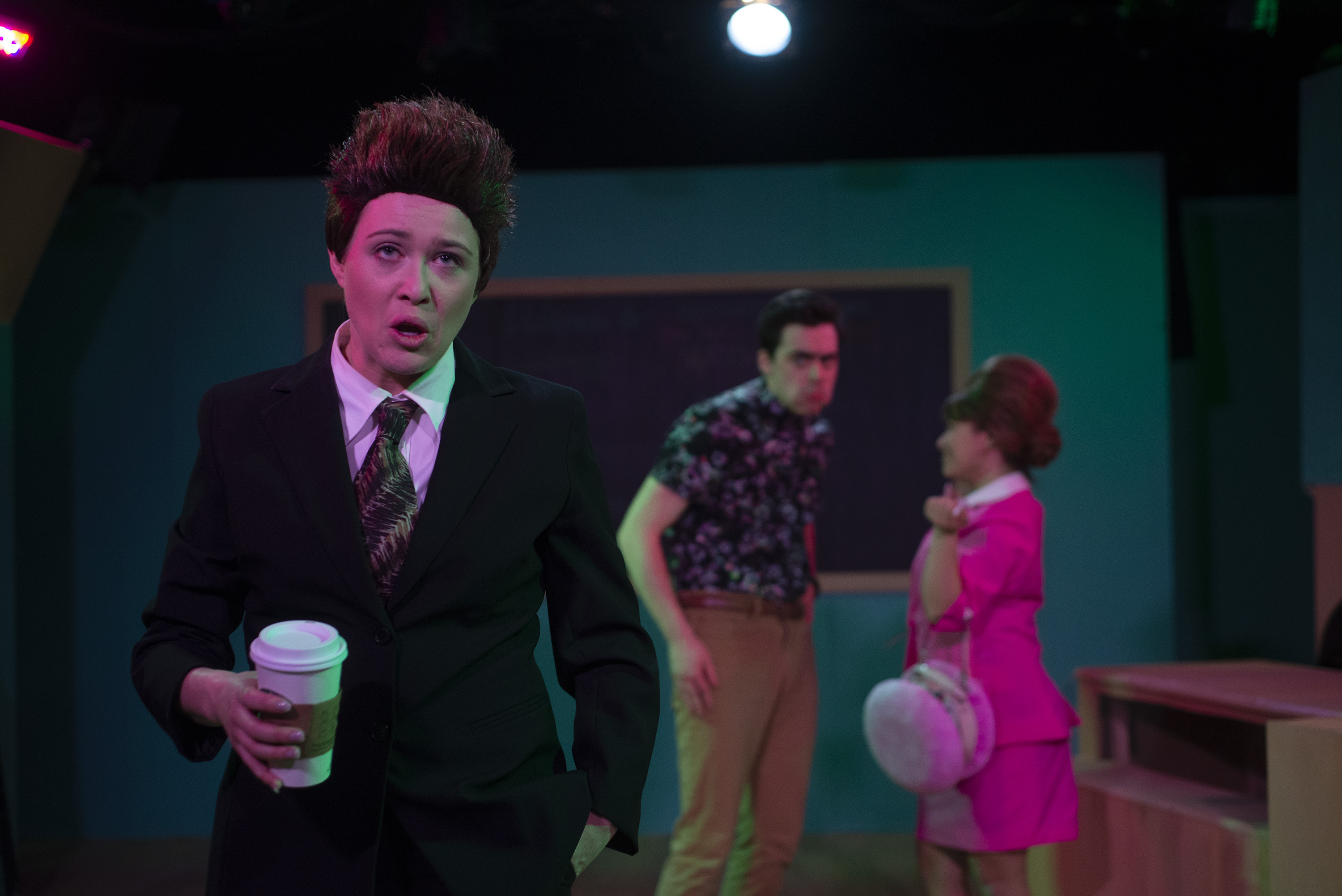 Do you work with a racist? Like, right now, at your current job? Do you work with someone who makes off-color “jokes” and causes marginalized employees to feel supremely uncomfortable? Do they utter crude remarks that create a palpable tension in the workspace? Is this feeling amplified because you not only work with them, but they’re also your direct superior? Don’t you wish you could do something about it? Don’t you wish you could find a way to show them just how sick and wrong and hateful they truly are?

Or is something holding you back from taking that step?

If you’re playwright Ben Claus, your answer to all this might be to funnel your frustration and ethical questioning into a play. More specifically, a play called “Mr. Kotomoto Is Definitely Not White,” premiering with NoMads Art Collective and directed with flourish by Scott Jackoway. Part workplace social comedy, part hyperactive fever dream, “Mr. Kotomoto” is filled with enough bombastic performances and quirky stylistic designs to make you want to keep an eye on NoMads, whatever their next project will be. Young storefront companies are rising up in the city, crafting new modes of theatrical language and imagery not seen on our larger stages. NoMads joins that league of boundary pushers. It will be thrilling to see where they go next.

Just like the NoMads as a company, the play starts with a lot of promise. The crux of the show—how three employees at a tea store react when their boss sends an email blaming the store’s history of shoplifting exclusively on black men—is rife for commentary and examination. The different threads pulled from this premise are of equal fascination: the newly promoted assistant manager, Reed (Shea Petersen, wonderfully sympathetic), whose dreams of climbing the corporate ladder come into conflict with his own friendships; the only employee of color at the store, Josie (a remarkable Shea Lee), whose Asian-American identity (alongside her new brand of Dream Tea) is exploited for the store’s gain; the newest hire to the store, Beatrice (the deliriously funny Bethany Arrington), who just wants to make some friends and not get leered at by their racist, creepy boss, Bruce (Ryan Leonard, easy to love to hate).

But despite fascinating thematic elements, honest performances and impressive design choices—Claire Ashley’s puppet design almost steals the show entirely— “Mr. Kotomoto” falls into too many traps of its own making. Alyssa Mohn’s moving set provides great perspectives on the store itself but leads to a lot of slow-moving scene transitions. A romantic relationship between two characters blossoms from out of nowhere before becoming a glorified footnote in the overall plot. And the imagination and dreamlike quality of the first act (and the top of the second) devolves into drawn-out introspective monologues that seem to exist in another play entirely.

Like drinking a cup of Josie’s Dream Tea, “Mr. Kotomoto” fills you up with vivid imagery, earnest performances, and retrospective conversation but turns too cold too quickly. If nothing else, this taste guarantees that the next cup will be a little stronger. (Ben Kaye)